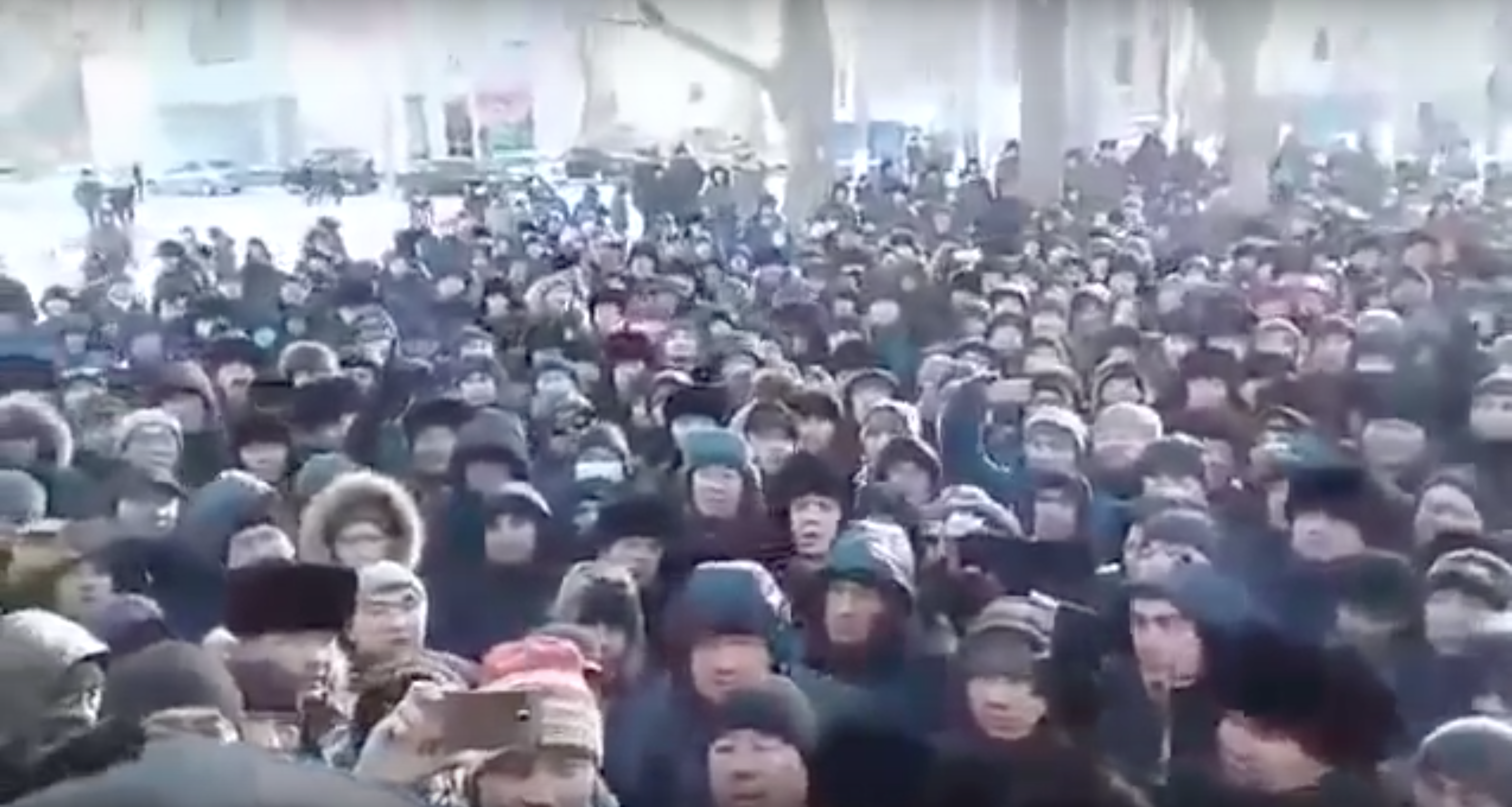 Amateur footage showing a crowd of demonstrators outside a police station in Karaganda. (Photo: Screengrab from ProjectKazakhEli YouTube account)

A murderous brawl in a cafe in central Kazakhstan is testing the nation’s reputation for interethnic harmony as self-styled vigilantes — real and virtual — talk of vengeance.

On January 6, around 200 people mustered outside a police precinct in the industrial city of Karaganda demanding punishment for a killing that occurred over the New Year. Authorities aggressively discourage impromptu shows of public discontent, so the appearance of the angry crowd doubtless had them spooked.

Nationalist-minded internet users have likewise called for justice and indulged in calls for reprisals against members of the Armenian community.

The incident that triggered this upswell of rage occurred on the night of December 31 at a cafe called Ancient Rome. A fight broke out among apparently drunken patrons. One 23-year-old man died from stab wounds. Another three were injured in the fight.

Police say they have so far detained three suspects and that another is wanted.

This episode took a further turn when it emerged that the fatality was an ethnic Kazakh and that the suspected killer is Armenian.

Participants at the Karaganda rally were ostensibly there to demand that the authorities inform them about the progress of their investigation and to punish those responsible. But RFE/RL’s Kazakh service reported that organizers needed to calm the crowd and ask them to refrain from addressing the ethnic angle. The broadcaster said the police presence was intensified and that officers had deployed equipment for crowd control.

The akim, or governor, of the Karaganda region, Yerlan Koshanov, on January 6 met with the demonstrators and assured them that the General Prosecutor had taken personal charge of the case. This too is indicative of the sensitivity with which officials are treating the affair.

Prosecutors have blamed the escalating tempers on the proliferation of provocative messages spread through social media and instant messengers. They warned that people behind those messages would face penalties.

Sputnik news agency cited prosecutors as saying at least one person has already been targeted with a criminal investigation over a post left on VKontakte in which they allegedly incited violence against a minority ethnic community.

The Armenian government has also got involved. Yerevan’s mission in Kazakhstan urged local media not to relay unverified information, lest it fan the ethnic aspect of the incident. Meanwhile, representatives of the Armenian diaspora in the Karaganda region recorded a video expressing their anguish over what had happened and condemned those responsible for the violence. “Our brotherly nations have always lived, and will continue to live, in peace and friendship,” said one of the people in the video clip.

But this was not enough to prevent some overzealous and ill-informed attempts at score-settling. According to an account posted online by Astana-based political analyst Arsen Sarsenov, a group of people in the northern city of Semey seems to have done its bit by going from cafe to cafe in search of Armenians against whom to vent their fury. The video included in Sarsenov’s Facebook post shows the gang dropping in on an establishment called Cafe Baku, named after the capital of Azerbaijan. They appear to have confused Azerbaijan for Armenia.

The anxieties only gained momentum as they crossed the Caspian. Prominent Armenian politician Edmon Marukyan expressed concern for the safety of fellow Armenians in Kazakhstan and then accused local Azerbaijanis of using the Karaganda brawl to spread anti-Armenian sentiments.