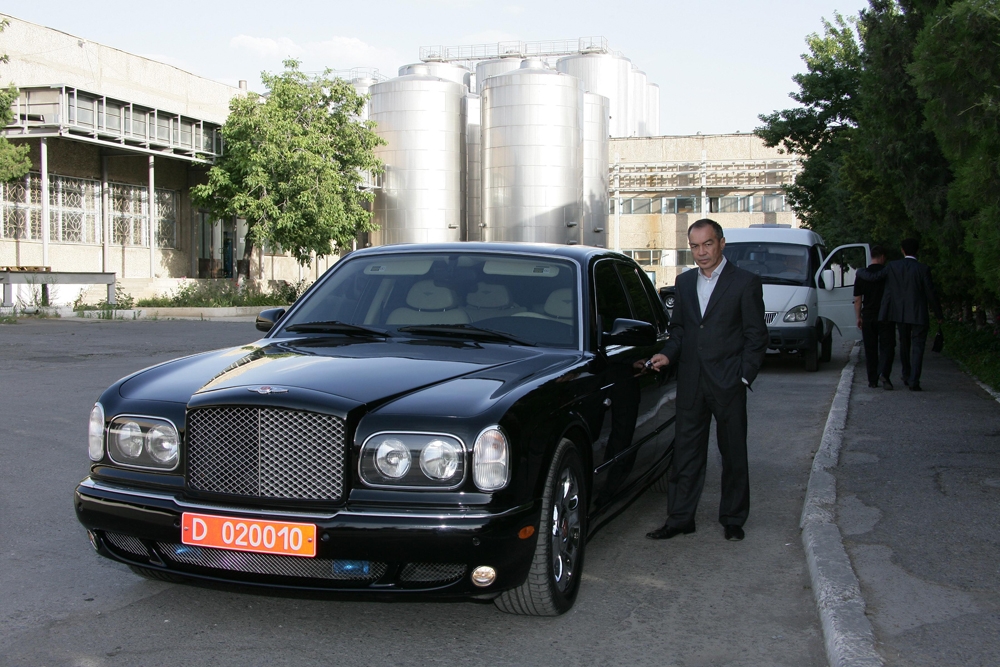 Tohtar Tuleshov in front of his brewery in Shymkent. A military court in Kazakhstan has sentenced Tuleshov to 21 years on coup-plotting charges, which could have grave repercussions for small-time civil activists charged on related offenses. (Photo: Kazakhstan’s National Security Committee)

A military court in Kazakhstan has sentenced a brewery tycoon to 21 years on coup-plotting charges, bringing a close to an opaque two-month-long trial that shed little light on exactly what happened.

The fear now is that Tohtar Tuleshov’s conviction could have grave repercussions for small-time civil activists charged on related offenses.

The Astana Military Court on November 7 determined that Tuleshov had sought to provoke turmoil by financing a wave of anti-government protests, as well as financing a transnational criminal group.

Tuleshov, a prominent Shymkent-based entrepreneur popularly known by the moniker of “Beer Baron,” will be stripped of military ranks and state awards granted for public service. He also faces confiscation of much of his property, which included homes, jewelry, cash, 30 horses, three camels and a huge fleet of cars.

The trial began on September 14 and was held behind closed door due to what authorities claimed was classified information under review. Journalists were permitted only to attend the reading of the verdict.

Tuleshov’s downfall was ostensibly linked to a wave of demonstrations that broke out across Kazakhstan in the spring. Those protests were driven by opposition to a law that would have opened the way to privatization of land. The legislation was adopted swiftly and with no public consultation late in 2015, but public anger only began to simmer around April as details slowly came to wider prominence.

The tycoon had been in prison since January, when he was detained by security services on suspicion of illegal possession of weapons, drugs and “prohibited literature.” That was well before the land protests began.

The state argued in its case against Tuleshov that he had been assisted in his criminal schemes by several former high-ranking officials, including Ilyas Bakhtybayev, a former first deputy general prosecutor; Khibratulla Doskaliyev, the former head of the Interior Ministry in the South Kazakhstan Region; Saken Aytbekov, a former deputy police chief of the South Kazakhstan Region; and Bekzat Zhumin and Kayrat Pernebayev, lieutenants in the Defense Ministry’s southern military command.

Given the gravity of the charges, some of those in the dock faced less stiff sentences than might have been expected.

Bakhtybayev was found guilty of plotting to overthrow the government through force as well founding and being involved in an extremist organization. He was sentenced to seven years in prison and stripped of his Order of Honor.

Doskaliyev and Aytbekov too were found guilty of planning to overthrow the government, and sentenced to five years in prison.

The nature of the cases against others associated in Tuleshov’s misdeeds is confused. A lawyer for Zhumin, for example, said his client had previously been identified in the media as an accomplice to the coup plot, but that he was only convicted on corruption charges.

“He has no relation to the violent overthrow of the authorities. He was only involved in corruption schemes linked to this case,” Zhumin’s lawyer, Igor Tsoi, told media outlets.

It was the State Security Committee, or KNB, the successor agency to the KGB, that had previously identified Zhumin and other officials as being suspected of organizing the land protests with a view to sowing unrest.

Another person sentenced on November 7 was Tuleshov’s son, Tulegen, who was found guilty of obstructing investigations and possessing narcotics with intent to sell. He received a five-year suspended sentence and walked out of court.

Quizzed by reporters after the verdict, Tulegen Tuleshov said he was not at liberty to discuss the case, but expressed confidence his father’s troubles would be resolved.

“We will sort everything out,” he was cited as saying by Informburo.kz.

The public was primed for a guilty conviction for Tuleshov by an aggressive media campaign — seemingly coordinated by the security services — designed to depict the businessman as venal, vindictive and power-hungry.

A documentary titled “Shymkent Excesses” that aired on privately owned TV station KTK accused Tuleshov of being associated with international organized-crime kingpins and having a small army of well-armed heavies at his disposal with which to settle scores with crime and business rivals. It is not clear that any of the many crimes that, in the KTK program, Tuleshov was alleged to have committed were ever the subjects of criminal investigations by authorities.

Dosym Satpayev, an analyst who studies the inner workings of Kazakhstan’s elites, has written that he believes the Tuleshov saga was connected with political infighting aimed at discrediting the southern clans, under whose patronage the beer tycoon ostensibly operated.

“Kazakhstan’s unitary form of government and the super-centralized political system have created the illusion that the only players are interests groups and financial-industrial groups close to the president,” Satpayev wrote in June on Ratel.kz. “And yet the roots of most of these groups are found at the regional level. So it is not surprising that a blow against Tohtar Tuleshov has been interpreted by some experts as ‘a black mark’ on all southerners.”

On October 18, while Tuleshov’s own trial was still ongoing, he appeared as a prosecution witness by video conference in a parallel trial, taking place in the western city of Atyrau, of two activists charged with organizing the unsanctioned land protests.

“I studied the issue of land reforms. And like every Kazakhstani, I was not very happy that land was to be sold to foreigners. I began to look at the region, I looked with attention at the west of the country, where more people are disposed to look negatively upon the sale of land,” Tuleshov said in his testimony.

Tuleshov claimed he gave one of the activists on trial, Talgat Ayan, $100,000, although he barely knew of him and had never met him. He said the money was intended for roundtables and similar public events, but that he took no particular interest in how the funds were spent.

Ayan and his co-defendant, Max Bokayev, say they have never met Tuleshov or received any money from him.

“I think there is something very doubtful about the assertions based on the testimony of people that have not seen one another or know one another. This aspect of the investigation left me somewhat unconvinced,” Sarym said.

The outcome of the Tuleshov trial does not bode well for Ayan and Bokayev, whose trial is still ongoing.

“Finding Tuleshov guilty could influence the outcome of Bokayev and Ayan’s trial. By linking the actions of civil society activists [to Tuleshov], the authorities have left these activists hostage to their attitude toward Tuleshov,” political commentator and opposition activist Amirzhan Kosanov told EurasiaNet.org.

“And yet judging by the trial in Atyrau, attempts to pass off these activists as proxies for the Beer Baron look quite unconvincing and grotesque,” Kosanov added.