In its current state, Kazakhstan’s army is in little condition to discourage saber-rattling from the north. 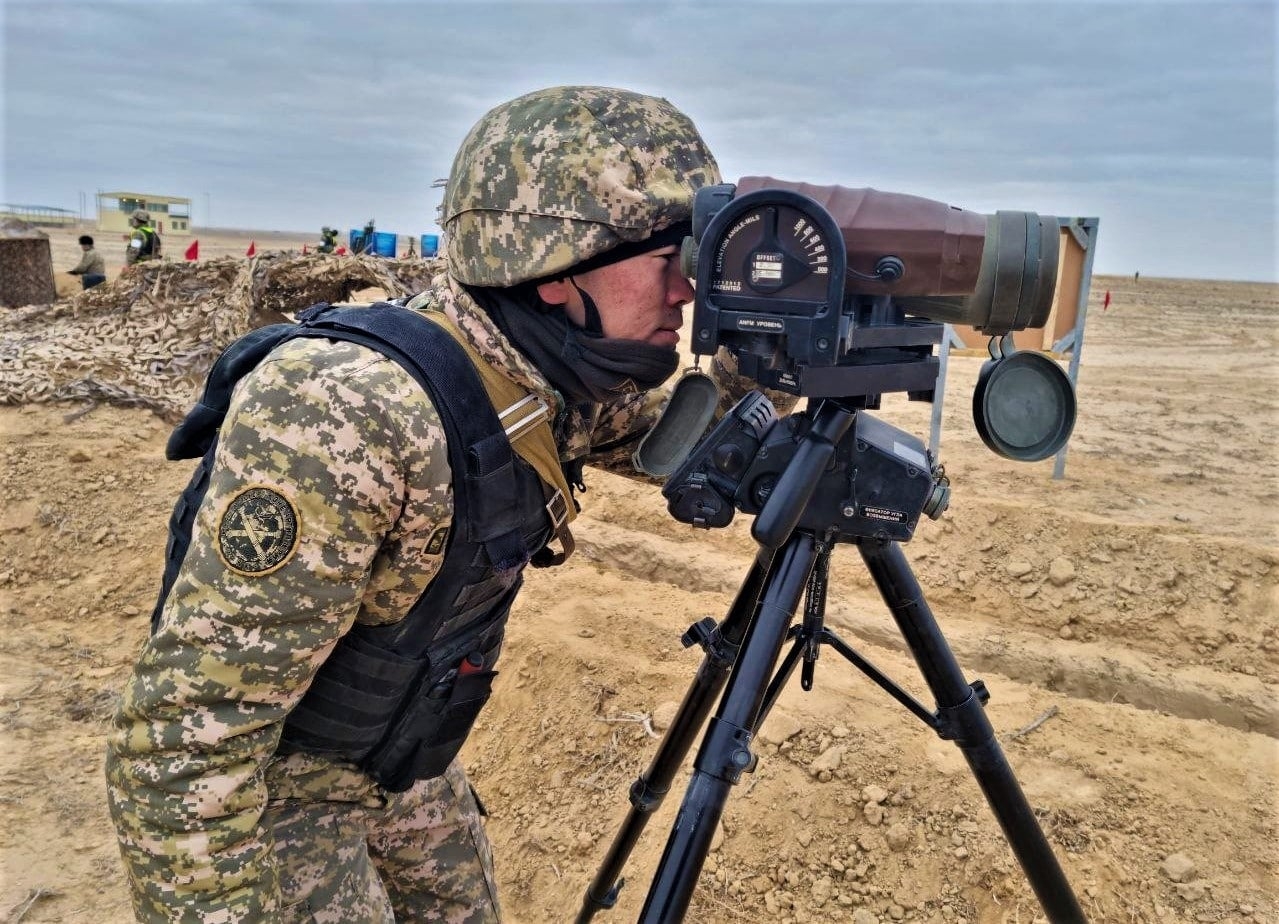 In the space of only a few months, Kazakhstan has seen a major outburst of violent civil unrest within its own borders and then an invasion of Ukraine launched by its neighbor to the north, Russia.

It is against this backdrop that the government has, despite a sharp projected drop in the rate of economic growth, decided to substantially increase its defense outlays.

On April 7, Deputy Finance Minister Tatyana Savelyeva presented a three-year budget to the parliament that envisioned an additional 441 billion tenge (around $1 billion) in spending in 2022 on “increasing combat readiness and upgrading the equipment of law enforcement and emergency situation agencies.” The government had said in December that it would be spending 859 billion tenge on the military, policing and emergency services.

The bulk of that enhanced spending will go toward boosting the number of special forces units operating under the auspices of the Interior Ministry, the National Guard, and the Defense Ministry, as well as acquiring more equipment, including military transport aircraft. The salaries of military personnel will be hiked by up to 40 percent.

For context, according to the Military Expenditure Database compiled by the Stockholm International Peace Research Institute, neighboring Uzbekistan spent the equivalent of $1.4 billion on defense in 2018, the most recent year for which there is available data.

The motivations for this sudden profligacy, just as the government has downgraded its economic growth forecast for this year from 3.9 percent to 2.1 percent, are not hard to guess.

In the first few days of January, Kazakhstan was stunned by a wave of politically tinged violence in its business capital, Almaty, that forced President Kassym-Jomart Tokayev into the humiliating position of having to appeal to a Moscow-led defense alliance, the CSTO, for help.

Tokayev sought to cast the turbulence as the work of foreign-based troublemakers exploiting the legitimate grievances of the local population, but most observers give this narrative little credence. Elite infighting is believed to be a more persuasive explanation. Apparent poor discipline within the army, law enforcement agencies and the security services only worsened the situation.

Reform of the defense apparatus is not confined only to spending.

The imminent prospect of a major shakeup was evident even before the turmoil in Almaty had been quelled. On January 5, Tokayev removed his predecessor, former President Nursultan Nazarbayev, as head of the security council. Two weeks later, he fired Defense Minister Murat Bektanov, accusing him of demonstrating a lack of leadership abilities during the worst security crisis the country had experienced in its three decades of independence.

In February, a military commission convened to discuss plans on how to root out effectiveness-sapping corruption from the armed forces.

“Measures to combat corruption in the army will be aimed at eradicating bureaucracy, increasing transparency and openness,” the chairman of the commission, Deputy Defense Minister Sultan Kamaletdinov, said at the meeting.

A string of corruption scandals involving the acquisition of overpriced, low-quality weaponry has claimed the jobs of many officials over the years. In 2010, one former deputy defense minister was sentenced to 11 years in prison for buying shoddy mortars and howitzers from an Israeli businessman.

Officials have accordingly stressed that particular attention is being devoted to avoiding graft during the procurement process. Military personnel involved in overseeing this side of business will be made to undergo lie detector tests, the Defense Ministry has said.

Transparency is even purportedly being extended to catering, an area ripe for cost-cutting and concomitant embezzlement. A public association known as the Committee of Soldiers' Mothers is being invited to keep an eye on how food for troops is acquired and served.

Sergei Duvanov, an opposition-leaning journalist and activist who has been strongly critical of Russia’s invasion of Ukraine, argues that this planned overhaul of the armed forces should have happened a long time ago.

“Corruption has corroded our army, like all branches of government,” he told Eurasianet.

And then there is Russia.

Kazakhstan and Russia are ostensibly very tight allies. They both belong to the Collective Security Treaty Organization and routinely take part in joint military readiness exercises.

But the war in Ukraine is fueling nervousness. This is only compounded by frequent and unfounded allegations by chauvinist Russian pundits and politicians about ethnic Russians, who account for almost 20 percent of Kazakhstan’s overall population, facing discrimination from ethnic Kazakhs. Those complaints echo similarly baseless allegations made over the years of Ukrainian mistreatment of Russian speakers.

Nobody has done more to foment Kazakh anxieties than Russian President Vladimir Putin, who remarked ominously in August 2014, just as war was raging in eastern Ukraine, that his Kazakh counterpart, Nazarbayev, had “created a state on territory where no state had ever existed.”

“The Kazakhs had never had statehood. He created it. In this sense, he is a unique person for the former Soviet space and for Kazakhstan too,” Putin said at the time.

In its current state, however, Kazakhstan’s army is in little condition to discourage hypothetical saber-rattling from the north.

Last month, independent news website Orda cited military sources as expressing dismay over the antiquated condition of their defense equipment, much of which was produced as early as the 1960s.

The army’s arsenal of Shilka self-propelled anti-aircraft weapon systems, which are designed to protect troops from low-flying aircraft and helicopters, are “completely out of order,” one officer told the website.

Orda also obtained letters written in February by the command at a military unit in the southern Kordai district complaining about defects with their Soviet-made Prima multiple launch rocket systems.

“It is not always possible to fire them on the first go,” the letter stated. “Restarting the control panel is required.”

Kazakhstan’s army is likewise plagued by shoddy ammunition storage standards. A series of blasts at a munition depot in the southern Zhambyl region in August 2021 killed at least 12 people and wounded over 90. That happened just two years after a near-identical event near the town of Arys, in the southern Turkestan region, where a colossal blast forced the evacuation of tens of thousands of nearby residents.

When it comes to buying new weaponry, some experts are eager to see Kazakhstan rely less on Russia-made arms.

Yuri Poita, a Ukraine-based Asia-Pacific analyst at the New Geopolitics Research Network, said that Kazakhstan is primarily equipped with Russian arms that are often inferior to Western- and even Chinese-made analogs.

“Such weaponry can only be used in limited-scale and medium-intensity combat against weak states or illegal armed groups,” Poita told Eurasianet. “Today, the decisive factor is not the number of armored vehicles and troops, but the availability of modern high-tech equipment, including high-precision weapons.”

The urgency on defense spending marks a stark change from the posture seen as recently as last year, when Adylbek Aldabergenov, an advisor to the defense minister, stated in an interview to a Kremlin-run outlet that he saw little need for an “arms race” when the country was preoccupied by far more pressing social problems.

In late February, just as Russia started its invasion of Ukraine, Kazakhstan placed its armed forces on high alert. Since then, members of the public have noticed regular movement of troops and military equipment around the country, which has in turn sparked rumors that forces were mustering along the border with Russia. The Defense Ministry has categorically denied that speculation and said the movements were being carried out as part of earlier-planned military exercises.

For all those denials, it is an inescapable fact that Russia’s recent behavior is forcing a reckoning, and not just in Kazakhstan.

As Erica Marat, an associate professor at the National Defense University in Washington, told Eurasianet, the depth of the brutality and violence that Moscow is unleashing through its “special operation” in Ukraine has come as a total surprise to Central Asian countries.

“It would be strange to imagine that Kazakhstan is not considering the possibility of Russian aggression after this,” Marat said. “Until recently, this seemed absurd, but not now.”