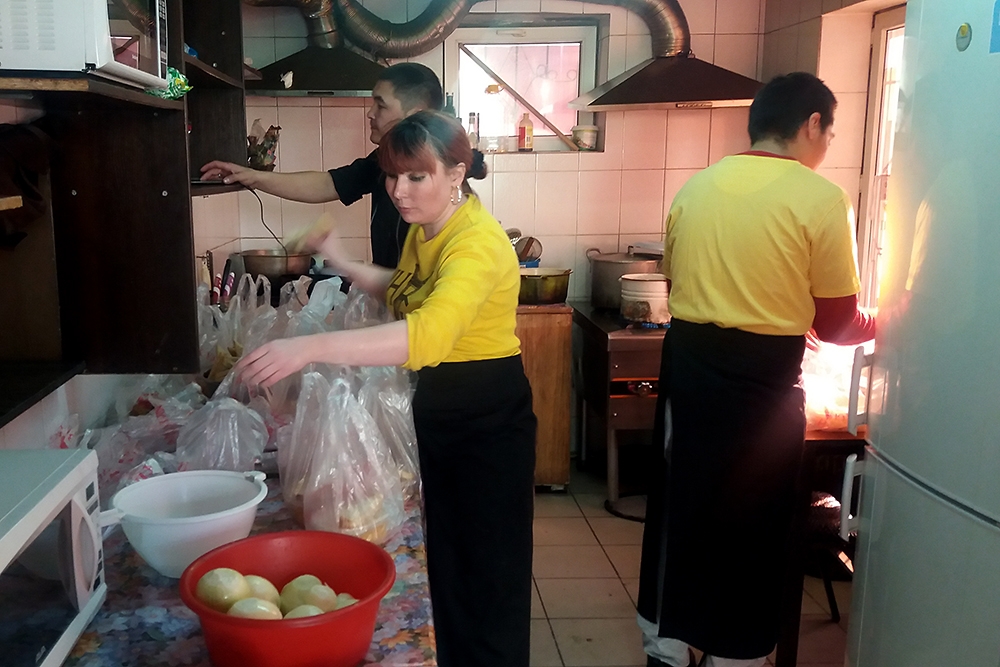 Kayrat Sarsenbiyev (right), one of the staff at the café diagnosed with a learning disorder, helps prepare meals for elderly patrons. (Photo: Joanna Lillis)

Zhuldyz Abdykarimova is catching her breath after the lunchtime rush, wiping down tables in the small cafe where she works in a suburb of Almaty, Kazakhstan’s commercial capital.

Tucked into a low-rise apartment block, the eatery — with its menu offering standard Central Asian fare like noodles, dumplings and plov (meat and rice) — looks like any other eatery at the budget end of the market in the city.

Yet this is a cafe with a difference. The staff, smartly kitted out in long black aprons and yellow tops, live with learning disabilities and mental disorders, groups that are largely invisible in Kazakhstan.

“I work as a waitress, serving people... and I help in the dumpling shop. I like the job,” said Abdykarimova, a vivacious 26-year-old with a ready laugh. “I’ve been taught a lot here.”

Like the other staff, before she got a job in this outlet, which is called simply Training Cafe, Abdykarimova was isolated from the wider community.

Evidence shows that across much of the former Soviet world, institutionalization remains the norm for children identified as having cognitive or behavioral difficulties. Like many others, Abdykarimova spent virtually all her time within the four walls of the residential psychiatric institution where she lives, with no apparent prospect of ever finding employment outside.

“I’ve never worked before,” Abdykarimova told EurasiaNet.org. “I went to the institution straight from school.”

Kazakhstan is trying slowly but surely to shed itself of Soviet practices. “We have inherited Soviet punitive psychiatry, when all those who had psychiatric illnesses were sent straight behind bars,” explained Anna Kudiyarova, director of the Almaty-based Psychoanalytic Institute for Central Asia.

Training Cafe is the brainchild of this US-educated psychoanalyst, who is working to challenge stereotypes and prove that many people with learning disabilities and mental health problems can integrate and make a positive contribution in society.

“What we’re doing is called social inclusion. Our people are now part of society,” Kudiyarova told EurasiaNet.org, in an interview in the spic-and-span cafe. “We want to show that this sort of model is realistic.”

Kudiyarova said the privacy concerns of those benefiting from the cafe initiative prevent her from speaking in detail about their individual issues, but she said that they range from people suffering from mental illness to those with developmental difficulties. There are some 200,000 people registered as suffering from chronic psychiatric disorders in Kazakhstan, according to figures cited in January. Not all live in the country’s 53 psychiatric care institutions, but many are shut up for most or all of their lives.

Often, children born with learning difficulties are given up at birth by parents who fear coping with raising the child in a society that stigmatizes those viewed as somehow different.

“They were born, they were abandoned, they ended up in an orphanage… [then] in a residential institution for people with chronic psychological disorders, and that was it — from there it was a direct road to the cemetery,” Kudiyarova explained. “It’s terrible.”

She and likeminded practitioners are pushing back against a system that they argue wastes human potential. “There are two important priorities: de-stigmatization and de-institutionalization,” Kudiyarova explained.

Although there is a long way to go, the government is on board with efforts to transform mental healthcare. Last year, Kazakhstan ratified the UN Convention on the Rights of Persons with Disabilities, and helped 4,400 people with disabilities (physical and mental) find jobs.

Last fall, Tamara Duysenova, the health minister, dropped by Training Cafe for lunch to signal Astana’s support, and her ministry teamed up with civil society groups to hold public hearings on promoting social inclusion and combating stigma against people with mental disabilities.

Often, those with disabilities can “realize their own potential, cope with ordinary real-life situations, work productively and fruitfully, and also make their contribution to the life of society,” Bakhyt Tumenova, president of the Amansaulyk foundation specializing in healthcare issues, pointed out.

Reform initiatives include attempts to reduce numbers in care facilities, or even abolish them altogether as some European countries have done. There are also moves to shift the emphasis in treatment away from brain-numbing sedatives toward therapeutic treatments.

Shocking revelations that emerged from one Almaty psychiatric institution last year demonstrated the need for reform. After a whistleblower went public with corruption allegations, claiming institution bosses were siphoning off state funds and inmates’ welfare benefits, complaints about inhumane treatment, including physical abuse, flooded the media.

Opened last summer under the slogan Different But Equal and now employing 40 people, Training Cafe has emerged as a symbol of pride for those striving to break the mold of Soviet-style care.

Training Cafe it is not yet breaking even, let alone turning a profit. It survives on grants from the Eurasia Foundation of Central Asia and Soros Foundation-Kazakhstan. [Editor’s Note: SFK is part of the Soros Foundations Network. EurasiaNet.org operates under the auspices of the Open Society Foundations, a separate entity in the network.]

The cafe also collects private donations, raised via a savvy social media strategy, and gets some support from the local government, which pays psychologists’ salaries and has funded disability-friendly renovations. In addition, Training Cafe has opened a soup kitchen, sustained by private donations, dishing out 65 free meals a day to the elderly and homeless.

“I’m all alone and I can’t cook for myself,” said Margarita Petrovna, a frail 81-year-old queuing up in the snow for the daily distribution. “This is like a magic wand for me.”

Recast as givers rather than takers, Training Cafe’s staff have “responded really well” to assisting others in vulnerable segments of society, said Rasima Temerbayeva, the psychologist who dreamed up the initiative. “It’s aroused their compassion.”

Equipped with new skills, some are now setting their sights on using their experience as a stepping stone into the wider world.

Kayrat Sarsenbiyev, 25 — whose jokes keep his colleagues amused as they bustle about their work — has already moved out of his institution into the home of a local family. “Home is better,” he said, quipping that his colleagues will not get rid of him so easily at work.

Abdykarimova is also looking to the future. “I want to work here, but I also want to be independent,” she mused. “I’d like to be a manager. The main thing is to learn.”