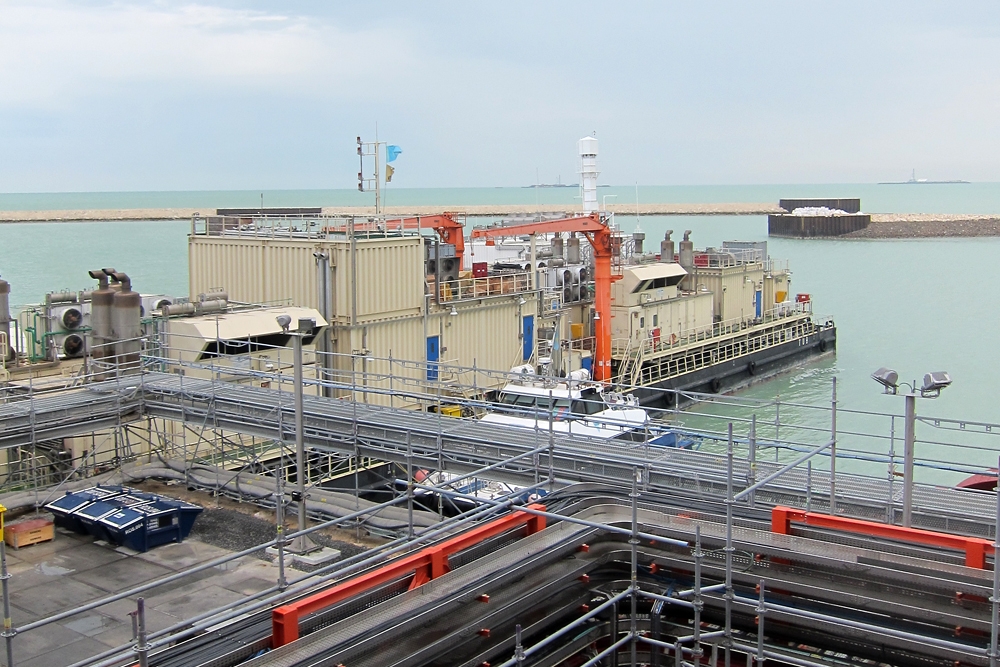 Kazakhstan's Kashagan offshore oil field in the Caspian Sea is the largest field outside of the Middle East. Oil accounts for 25 percent of Kazakhstan’s GDP and 60 percent of its balance of payments. (Photo: Joanna Lillis)

The steep decline in global oil prices is stoking angst in Kazakhstan. Experts and officials alike say the government has ample resources to grapple with fiscal surprises. The real question is whether the political will exists for the government to take necessary measures.

Economic storm clouds have been gathering for a while over Kazakhstan, starting with February’s currency devaluation, followed by the fallout from an economic slowdown in Russia, caused in large part by Western sanctions. Now, in a triple whammy, slumping oil prices threaten to put a big dent in Astana’s best-laid budget plans.

The government’s fiscal woes have been compounded by news that the giant Kashagan oilfield will not be starting production this year. Officials had been counting on Kashagan revenue to help fill state coffers in 2014.

Looming hard times could have significant repercussions for President Nursultan Nazarbayev’s image and policies; Nazarbayev has defined his administration by a grand bargain in which he delivers a rising standard of living in return for public acquiescence to his authoritarian political rule.

On October 16 the price of oil – which accounts for 25 percent of Kazakhstan’s GDP and 60 percent of its balance of payments – fell to a four-year low of $82.93 per barrel, an approximately 20 percent drop over the price in February. The price has since ticked upwards, but economic repercussions for Kazakhstan are inevitable “if 25 percent of your income is coming from one source, and that product suddenly experiences a drop of 20 percent,” points out Nadeem Naqvi, an economics professor at Almaty’s KIMEP University.

On October 23, the government scaled back its 2014 growth target from 6 percent to 4.3 percent, and the president warned of tough economic times ahead. Annual revenue will fall $2.3 billion below target, Economy Minister Yerbolat Dosayev told parliament, and the government is revising its deficit forecast upward, from 2.3 percent to 2.6 percent of GDP.

Falling oil revenues are also causing officials to revise the 2015 and 2016 budgets, previously based on an oil price of $90 a barrel, to a more conservative $80, according to Finance Minister Bakhyt Sultanov. Oil is currently trading at around $86, below the $95 set in this year’s budget (though for most of 2014 it was above).

“Of course oil prices will affect Kazakhstan’s economy because the lion’s share of our budget is formed by oil production and export,” Saparbay Dzhubayev, an economics professor at Astana’s Eurasian National University, told EurasiaNet.org.

The government is putting on a brave face. Oil is “an important element,” remarked Ruslan Dalenov, a deputy minister of finance, laconically to Bnews.kz, “but this doesn’t mean that if the price drops everything mindlessly grinds to a halt.”

Astana has a back-up plan: for years it has been sticking to “a simple, ancient principle,” Dalenov said – “in years of plenty create reserves.” He was referring to the National Fund, a piggy bank set up in 2001 to accumulate revenue surpluses from the natural-resources sector for a rainy day.

“That’s a buffer that would help mitigate the spread of this negative effect across the population,” Naqvi, the economics professor, told EurasiaNet.org. “When it rains, you’ve got to put the umbrella out.”

The National Fund – which contains $76 billion, or three quarters of Kazakhstan’s total reserves of $104 billion – is a nice cushion to have. Yet, as Finance Minister Sultanov pointed out, this is not free money: lower oil prices mean less revenue pumped into the pot and more sucked out, so “any fall in the oil price will be reflected directly in the revenues of the National Fund.”

To guard against extensive depletion, Astana has just raised the minimum level of cash the fund must contain from 20 percent to 30 percent of GDP.

According to the IMF, the oil price at which Kazakhstan can balance its budget is $65.5, but a price below $90.6 means the balance of payments dipping into the red. If the price of crude were to drop to $60 (a level that analysts believe unlikely in the short term) Kazakhstan faces zero growth, National Bank adviser Olzhas Khudaybergenov said.

What Astana may need to do is spend its way out of the crisis, suggested Naqvi: “The negative effect can be mitigated firstly by dipping into the [National Fund], and secondly by an expansionary fiscal policy, taking the form of expanded government expenditure to drum up the economy.”

Injecting an element of volatility into the decision-making process, the low price of oil is fueling a new round of currency devaluation rumors, which the government has denied. With memories of unrest after February’s devaluation still fresh, Nazarbayev’s administration is keen to keep a lid on public discontent. The government has pledged not to cut social spending, but analysts are divided on whether officials can keep this promise.

Naqvi and other economic observers believe the government has sufficient reserves, coupled with low debt, to handle the upcoming challenges, provided officials demonstrate “the right political will.”