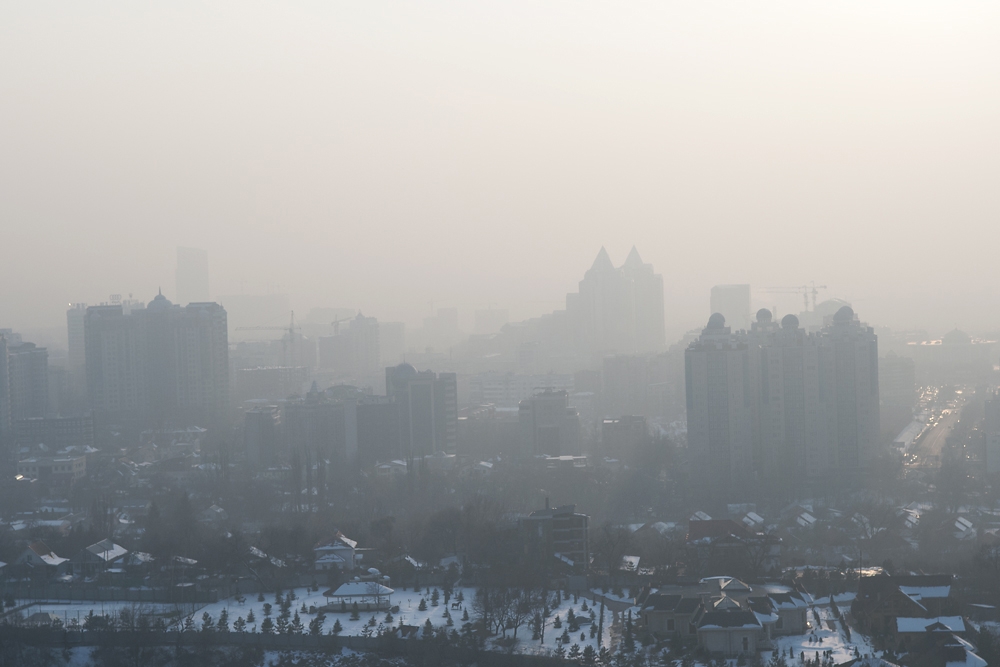 Authorities in Kazakhstan are at loggerheads with business executives over a plan to introduce a carbon dioxide trading scheme for companies generating greenhouse gas emissions.

The government sees two benefits to the scheme -- a healthier environment and more revenue for state coffers. But leaders of the country's business community, including KazEnergy, a powerful alliance of energy producers, is opposing the plan, arguing that it would stifle economic growth and decrease Kazakh global competitiveness. Left largely unsaid is what the government would do with the extra revenue. In Transparency International’s most recent corruption index, Kazakhstan ranked 133 out of the 174 countries surveyed.

According to various estimates, Kazakhstan annually generates approximately 240 million tons of CO2 emissions, and along with Ukraine, it accounts for only 2 percent of global carbon emissions . Despite this comparatively low emissions figure, Kazakhstan in recent years has sought to project itself as the regional leader in environmental protection. In 2009, Kazakhstan joined the Kyoto protocol, whose signatories pledge to fight global warming by reducing their greenhouse emissions. Using the year 1990 as a benchmark, Kazakhstan agreed to achieve a 15-percent reduction in emissions by 2020 and 25-percent drop by 2050.

In 2012, Kazakhstan was first among CIS republics to announce the formation of the carbon emissions trading system (ETS). In keeping with the so-called cap-and-trade scheme, the government initially set a nationwide cap of 147 million tons on allowable emissions (using the year 2010 as the benchmark year for calculating quotas for companies). Officials then planned to distribute allowances among 179 state-run and private companies that account for 80 percent of all emissions. Companies that fail to reduce their emissions, or do not purchase allowances from other companies that have credits to spare, would risk incurring significant fines (approximately $15 per ton), or losing their business licenses, according to the Ministry of Environmental Protection.

Government officials are extolling the virtues of the ETS. Addressing Kazakh law-makers at a November 2012 meeting, Minister of Environmental Protection Nurlan Kapparov said: "The advantages [of the ETS] need no mentioning. I will just give one figure. The market for carbon emission allowances in the EU was estimated at $120 billion in 2010." Privately, some Kazakh observers say authorities are pushing ETS because promoting a green economy is currently one of President Nursultan Nazarbayev's pet projects.

ETS plans quickly ran up against stiff opposition in corporate corner offices. The push-back prompted officials to back down. For example, instead of using 2010 (a year when production was lower due to the fallout from the global financial crisis) as the benchmark year for emissions, officials agreed to use 2013, and adjust standards accordingly. Addressing a government meeting on June 11, Kapparov, the environment minister, announced ETS standards would go into effect in 2014, instead of 2013, and indicated that the government would soften punishments for companies that fail to comply with ETS standards.

Even after the government backtracking, some observers say ETS standards may hit the country’s energy sector (particularly the coal industry) hard. Bela Syrlybayeva, an economist at the Kazakh Institute of Strategic Studies under the Kazakhstani Presidential Administration, told EurasiaNet.org; "The current situation demands urgent measures aimed at reducing emissions. At the same time, it is important to ensure a reasonable balance between the economic growth rate and development of low-carbon technologies."

ETS is lauded by the UNDP, but it is causing consternation of some foreign investors who say that they were not consulted. At a May 30 environmental forum held in Astana, foreign investors complained that they already pay various taxes for their CO2 emissions. The Ak Zhaik news website quoted Kenneth E. Mack, managing partner of Dechert’s law office in Almaty, as telling forum participants: "The tax for excessive emission is 10 times more than the tax for emission below the allowed limit. No other country has such a figure. On top of these, by Kazakh laws, administrative penalties and damage recovery sums are also levied ."

A representative of KazEnergy, who agreed to speak with EurasiaNet.org on condition of anonymity, complained that ETS implementation was injecting uncertainty into the market. "The uncertainty regarding the volume, costs and rules in the internal carbon market is causing significant problems for investors as they plan their budgets and forecast growth," the representative said. There is also widespread concern that companies with close governmental connections will get special treatment.

In the court of public opinions, ETS is causing a different set of concerns. Abiljan Husainov, head of "Eko-Kokshe," an environmental non-profit in the Akmola Province, told EurasiaNet.org; "The problem is that although we have good laws and regulations that protect environment, their implementation leaves much to be desired, especially at the level of small towns and villages."

Husainov added that “stricter measures must be adopted to preserve environment," and that flaws in the monitoring mechanism, especially a lack of inspectors, will likely hinder compliance.

There are also fears that the ETS can prompt businesses to pass along higher costs to end users, spurring inflation and generating discontent in many communities.

Privately, some government officials, even some of Kapparov's subordinates, have reservations about the viability of the ETS plan. Insiders say that the MEP is ill-equipped to administer ETS, and suggest it is possible that the 2014 implementation date will get pushed back again.

Alisher Khamidov is a researcher specializing in Central Asian affairs.