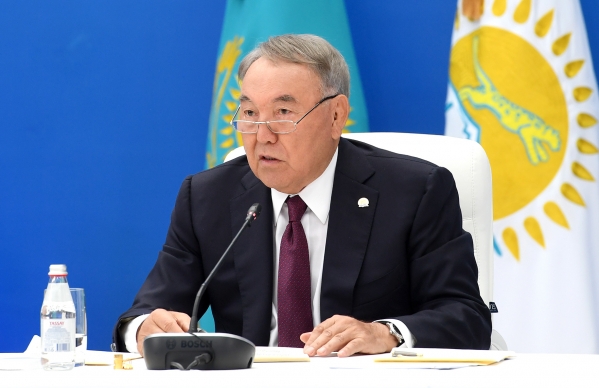 No mother-lover: Nazarbayev speaking at the Nur Otan council.

If the art of politics is about timing, Kazakhstan’s septuagenarian former president Nursultan Nazarbayev is getting worse at it.

In the months since he retired as head of state in March, Nazarbayev’s public appearances have begun to dwindle.

Citizens of Kazakhstan have instead become used to hearing more from the loyalist who inherited the position that he held for close to three decades – if not all of his power – Kassym-Jomart Tokayev.

So it was unfortunate that Nazarbayev chose his most recent re-emergence, on August 21, to lecture Kazakh citizens on the virtues of self-sufficiency, just as his middle daughter was seen splurging on a Swiss castle worth more than $60 million.

Speaking at a meeting of leading lights of the ruling Nur Otan party, the 79-year-old struck a cantankerous note, airing grievances and dispensing advice while his bland successor looked on vacantly.

One of the main outcomes of this political committee powwow was to reassure voters that there would be no early parliamentary elections. Without mentioning a date – parliament last secured its four-year term in March 2016 – Nazarbayev noted that elections would be held on schedule.

That he was irritated by the very idea of early elections struck many as bizarre, given that few Kazakh votes have been held according to schedule since independence.

Constitutionally speaking, setting election dates is the prerogative of the head of state, not his predecessor, but this didn’t deter Nazarbayev.

He launched into a scathing criticism of activists who have called for a switch to a majoritarian system for local and national legislative elections – a reform that would loosen the grip of the authorities over what are at present highly choreographed ballots.

Supporters of this system “have no arguments,” he harrumphed.

The majoritarian system is “characteristic for Asian countries, where the party system itself is not developed, and any party is built around a certain personality. The proportional model is fully consistent with the best global democratic practice,” he said.

The approach of Nur Otan – a party whose name is unmistakably modeled on his own – should be on the “continuity and consistency of the strategic course,” Nazarbayev said, warning against replicating other ex-Soviet countries by “shaking up the system.”

Such comments are a far cry from the man who once styled himself as a bold reformer, and hint at his growing unease over an increasingly vocal if still sidelined civil society.

His strongest criticisms during the meeting were reserved for low-income mothers – a demographic whose proliferation the state has long encouraged for demographic reasons, but whose persistent demands for increased social benefits have left authorities looking increasingly hamstrung.

“It’s give, give and then give some more,” he complained of the protests, noting that a recent rise in benefits had not sated the demonstrators.

“What were you thinking?” he asked, in a comment interpreted as a reference to family planning, before recommending that hard-up women “buy a pair of cows and look after yourself.”

As if on cue, these comments were swiftly followed by news that Dinara Kulibayeva, who along with husband Timur Kulibayev owns the country's largest bank, Halyk, had purchased a castle outside Geneva worth 62 million Swiss Francs ($63 million).

A vox pop by RFE/RL’s Kazakh service confirmed the cow comments had gone down badly.

One rural resident outside Almaty noted that the price of cattle feed these days made Nazarbayev’s suggestion completely unfeasible.

A woman in Nur-Sultan complained that Nazarbayev’s regime wasn’t doing much for common folk.

“He is always talking on television about the difficult times he went through. He has made us a thousand times worse off than himself…he lives well,” she fumed.

For big picture observers, the Nur Otan meeting was a reminder of Tokayev’s deeply subordinate status in the Kazakh leadership, amid excited chatter about a parallel power structure developing.

“Yesterday, those people got a sharp reality check.”