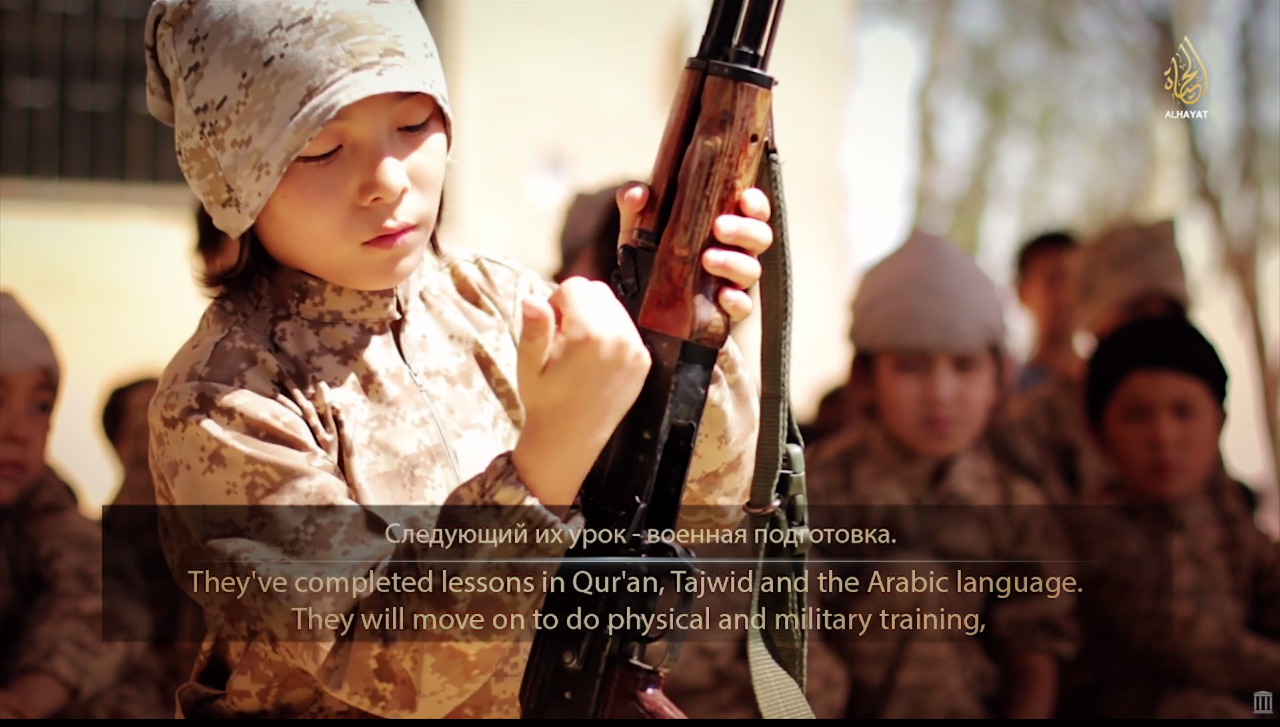 The Islamic State has released a propaganda video featuring Kazakh-speaking children calling for the slaughter of infidels. This is the latest propaganda effort by the extremist group appearing to target Central Asians.

The 15-minute video, entitled "Race Towards Good" and subtitled in English and Arabic, shows children at a training camp in an undisclosed location, where fighters are “raising tomorrow’s mujahedin,” according to a subtitle.

“I will be the one who slaughters you, O kuffar [infidel],” a Kazakh-speaking boy aged about 10, who gives his name as Abdullah and says he is from Kazakhstan, tells the camera. “I will be a mujahid [holy warrior], insha’allah.”

The high-quality video – apparently released over the weekend – shows young boys loading assault rifles as they undergo weapons training, and also marching with guns and practicing martial arts. [EurasiaNet.org is not posting a link to the video in order to abide by the provisions of Kazakhstan's anti-extremism legislation outlawing the propaganda of terrorism.]

It also features a girl aged around four in a camouflage headscarf cradling a weapon, and ends with an older girl aged around 10 telling the camera in Kazakh: “Right now, we’re training in the camp. We’re going to kill you, O kuffar. Insha’allah we’ll slaughter you.”

The other children sitting with her respond with a resounding cry of “Allahu akbar [God is great]!”

The film also features men firing weapons and completing military-style assault courses, and speaking to camera in Russian and Kazakh about their training.

“Meet some of our newest brothers from the land of Kazakhstan,” says a subtitle. “They responded to the crusader aggression ... and raced to prepare themselves and their children, knowing very well that their final return is to Allah.”

The release of the video comes shortly after Kazakhstan’s intelligence chief Nurtay Abykayev for the first time revealed official estimates for the number of militants from Kazakhstan who are waging jihad in the Middle East. There are some 300 fighting for Islamic State and around half are women, Abykayev said on November 18, adding that they have created a “Kazakh jamaat,” or cell.

Scholars believe some authoritarian regimes in Central Asia exagerate the threat of radical Islam to justify repression, although Kazakhstan has tended to downplay the threat, but there are believed to be militants from all over the region fighting in the Middle East. The latest video reveals that Islamic State is actively seeking to recruit more.

Kazakhstan has responded by tightening up anti-terrorism legislation earlier this month, and by more vigorously blocking online material officials deem extremist. A Daily Mail story on the latest Islamic State propaganda video (which has not been widely covered in Kazakhstan’s media) was accessible in the country on November 23, but inaccessible the following day.