Parents are pleading for relief from their kids learning from home, however. 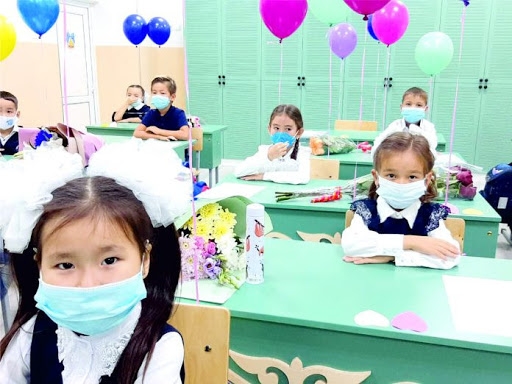 Only a limited number of children will be returning to the classroom. (Photo: Nur-Sultan city government)

With another wave of coronavirus cases looming, educational authorities in Kazakhstan have decided to pursue distance-learning for children in the first term of the scholastic year, despite calls from parents for a resumption of classroom-based teaching.

Officials said at a briefing on September 10 that their decision was based on the experience of countries that saw a spike of new COVID-19 cases after schools reopened.

Yeraly Tugzhanov, the deputy prime minister, said distance-learning will remain in place for at least the first academic quarter, which will last just over three months. A limited number of schools accommodating children in grades one to four in semi-capacity classes have been permitted to reopen, though.

Health Minister Aleksei Tsoi left open the possibility that safety precautions for schools could be relaxed, but he said that this would happen as part of a phased process.

Tsoi noted that even in spite of the lockdowns introduced in March, there have been 2,500 cases of coronavirus infections among children. Although children under 12 almost universally experience infections far less intensely than adults, they are still potential infectious carriers, he said.

“Use of non-contact temperature checks, [regulating] classroom occupancy and movements and masks does not work well with younger children,” Tsoi said. “Therefore, the risk of transmitting the virus among them is several times higher than among adults.”

Tsoi also dwelled on the parallel threat of a surge in cases of seasonal influenza and acute respiratory viral infections, which typically begin to manifest around November, when the weather gets colder. Around 70 percent of carriers of those illnesses tend to be children under 14, he said. By falling prey to conditions like the flu, children would lose immunity and thereby become more liable to contract the coronavirus, he argued.

Tsoi was eager to drive home the message that Kazakhstan will be better prepared for the next wave of COVID-19 than it was the first time around. Thirteen infectious diseases treatment facilities are slated for construction and the government has bought an additional 6,000 ventilators and set aside 22,000 beds with oxygen equipment.

Distance-learning may make sense from an epidemiological perspective, but teachers have found it difficult to cope with the challenges of instructing by means of digital technology, such as instant messengers. Teachers complain that students are skipping lessons and failing to complete homework. Social media is teeming with the desperate pleas of tired parents asking for a return to traditional learning formats.

Negativity toward the remote-learning format has only been compounded by some embarrassing scandals involving use of the Zoom conferencing tool. One parent complained, for example, that her child was exposed to swearing and even pornographic content through the program.

“We parents are absolutely horrified by what is happening,” the parent, Almaty resident Tatyana Golubeva, wrote on Facebook. “Just let our children go to school and get the education guaranteed them under the constitution of Kazakhstan.”

The Education Ministry has downplayed such complaints, saying that these kinds of incidents represent a rare exception to the norm. The incident alluded to by Golubeva occurred when a pupil shared a link to the Zoom conference with an outsider, who then shared a link containing the offensive material as a joke, the ministry said.