The former president’s inner circle is coughing up. 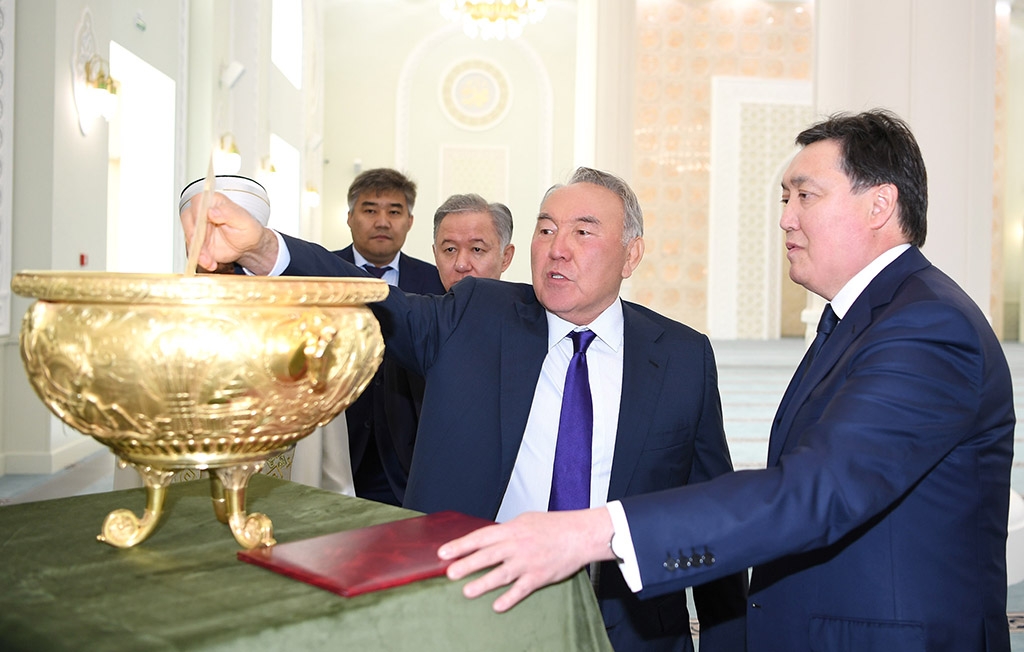 Nazarbayev has lost access to the golden bowl. (Elbasy.kz)

Some of the money was associated with Kayrat Satybaldy, Nazarbayev’s nephew, and Kayrat Boranbayev, the former father-in-law of his late grandson. Both are under arrest on corruption charges.

Some of the cash relates to a company formerly tied to Aliya Nazarbayeva, the ex-president’s daughter.

“Currently measures taken by investigative bodies have redeemed some 230 billion tenge, including by returning it from foreign jurisdictions,” the Commission on Counteracting the Illegal Concentration of Economic Resources said on July 18, in remarks quoted by Tengri News.

At current exchange rates, that is worth $473 million.

President Kassym-Jomart Tokayev set the commission up in June to return money laundered abroad and “expose monopoly (oligopoly) concentrations of economic resources received via illegal means and return them to the state.”

This was part of his efforts to “revise legislation that has contributed to the concentration of the country's economic resources in the hands of a narrow group of people and provided them with unnecessary preferences,” he said at the time.

That followed his earlier pledge of “de-oligopolization” for Kazakhstan, meaning an end to the cronyism and corruption that dogged the country during Nazarbayev’s three-decade rule.

Tokayev made that promise following deadly unrest in January that was sparked by political and socioeconomic grievances, including fury over rampant graft.

The arrests on corruption charges of Boranbayev and Satybaldy and his wife followed.

And now, with investigations ongoing, they appear to be coughing up cash.

In one case, unidentified figures under investigation “voluntarily returned from Luxembourg more than $170 million,” the commission reported.

Investigations into alleged plundering at Kazakhtelecom and other companies have yielded 36 billion tenge, or $75 million.

Investigators had previously accused Satybaldy of involvement in embezzlement at Kazakhtelecom.

After his arrest, he gifted to the state the stake of almost 29 percent that he owned in the telecoms operator.

An investigation into Boranbayev’s activities related to KazMunaiGaz, the national oil and gas company, has brought in 11.3 billion tenge, or $23 million, the commission said.

Investigations at a company called Operator ROP have “prevented the embezzlement of 180 billion tenge,” worth $370 million, it added, without explaining precisely how.

Operator ROP previously had a monopoly on collecting lucrative automobile recycling fees and was tied to the former president's youngest daughter, Aliya Nazarbayeva, until Tokayev ordered a state takeover of its operations after the Bloody January violence.

This is all part of his efforts to curb the political and economic muscle of the family of Nazarbayev, whose position was irrevocably damaged by the unrest amid accusations that his relatives were involved in stoking the violence.

The clampdown on family businesses has included inducing Bolat Nazarbayev, the former president’s brother, to agree to a “voluntary” shutdown of his money-spinning cryptocurrency mining operations.

But the crackdown is not all-encompassing.

The business interests of Kazakhstan’s richest couple, Dinara Kulibayeva, Nazarbayev’s middle daughter, and her husband Timur Kulibayev – currently worth $3.7 billion each according to Forbes – remain untouched.