Government critics argue that Kazakhstan has never had a frank debate about the legacy or lessons of its totalitarian past. 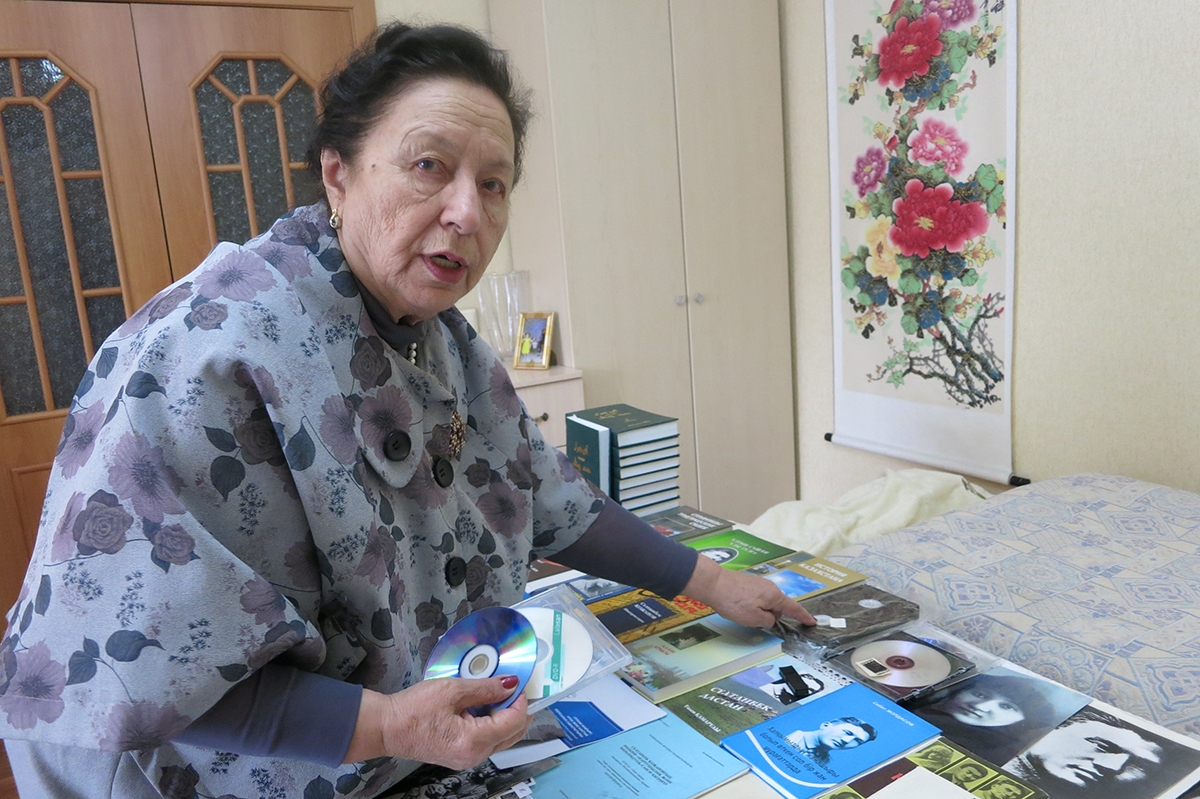 Svetlana Tynybekova, 78, in her apartment in Astana, Kazakhstan. Born in 1939, she experienced the tail-end Stalin's terror that swept up her family with it. (All photos by Joanna Lillis)

Svetlana Tynybekova was born in 1939, on the tail-end of a tidal wave of terror that ripped through the Soviet Union, sweeping up her family with it.

Her grandfather, a Kazakh intellectual and a former minister in the Soviet government of Central Asia, had been shot as an enemy of the people. Her grandmother was languishing in the Gulag.

“It’s unnatural, it’s inhumane, that a child should live having never met their grandmother and never see their grandfather at all,” said Tynybekova, a sprightly and alert 78-year-old, recalling her family’s past in an interview in her apartment in Astana last November.

On May 31, Kazakhstan will hold its annual commemoration of those, like Tynybekova’s family, who were caught up by Soviet repression.

“It really affected our family. My mother really loved her father and when she used to talk about him she’d become like a child. I’d look at her and think: this is someone who was robbed of her childhood. She was 16 [when her father was arrested]. The family was left in her hands,” she said.

Tynybekova’s grandfather, Sultanbek Khodzhanov, was born in 1894 into a family of cattle-herders in southern Kazakhstan, which was then part of the Russian Empire. He would, in the wake of the Russian Revolution, mature into a model Soviet citizen.

Khodzhanov imbibed his revolutionary ideas in Tashkent, where he attended teacher-training college and joined a radical underground student movement that was pushing for political change in the dying days of Tsarist rule.

Before and after the Bolshevik seizure of power, Khodzhanov associated with prominent Central Asian intellectuals, including the Kazakh Mustafa Shokay, who espoused the ideals of pan-Turkism, a movement that sought a political union of all the Turkic peoples.

Shokay fled to Turkey after a bid to establish an autonomous Central Asian government – popularly called the Turkestan or Kokand Autonomy – was routed by Bolshevik troops in 1918.

Khodzhanov, however, found common cause with the Bolsheviks, and rose through the ranks to become a People’s Commissar – the Bolshevik equivalent of a minister – in the Turkestan Autonomous Soviet Socialist Republic, the administrative entity created to rule Central Asia.

“Grandpa had high hopes of the revolution,” said Tynybekova, showing black-and-white photographs from the 1920s of a handsome young man in uniform.

He hoped the Soviets would live up to their high-flown slogans about equality and power to the people, “but gradually he became disillusioned, he saw all that wasn’t happening in practice.”

In 1924, Khodzhanov was posted to Kazakhstan. But his career in the higher echelons of regional Soviet officialdom did not last long. In 1925, he fell afoul of the Kazakh republic’s new leader, Filipp Goloshchyokin, who arrived with radical plans to modernize a traditional nomadic society that the Soviets deemed backward and unsuited for the modern age.

Under Goloshchyokin, the republic would undergo a blitzkrieg of industrialization of the economy and collectivization of agriculture that would ultimately eradicate the Kazakhs’ nomadic way of life and caused a devastating famine in the early 1930s.

From the outset, these plans were fiercely resisted by some Kazakh intellectuals and political leaders, including ministers in Goloshchyokin’s government.

These included Khodzhanov, who argued passionately against them, according to his granddaughter. So did a minister named Smagul Sadvakasov, who captured the resentments with a lament today taught to every schoolchild in Kazakhstan about how Goloshchyokin’s rule proved that “Kazakhstan was and has remained a colony.”

Objections were brushed aside. Critics were labeled “national deviationists” and removed from positions of power.

Khodzhanov was sent away, first to Moscow then back to Tashkent to continue his Communist Party work in less prominent roles.

Unbowed, he continued to champion the Kazakh cause.

In 1928, four years after Vladimir Lenin’s death, he penned an outspoken tract essentially accusing Stalin of betraying the revered first Soviet leader’s legacy by failing to allow self-determination for the peoples of the Soviet Union. Khodzhanov’s premise was that whatever fine names the Soviet republics bore, “a colony is still a colony,” said Tynybekova.

Nearly a century later, the colonial question remains a sore point. Annual commemorations of the Stalin-era repressions notwithstanding, critics point out that Kazakhstan – which is still ruled by its last Soviet-era leader, Nursultan Nazarbayev, 27 years after independence – has never had a frank debate about the legacy or lessons of its totalitarian past.

A newly formed political movement, Forum Jana Qazaqstan, has argued recently that without an honest assessment of historical traumas like the repressions and the famine, Kazakhstan will remain stuck in the past and never manage to complete the process of decolonization.

Khodzhanov was arrested at his home in Tashkent one morning in 1937 amid protestations that he was loyal to the party and the revolution. He was shot in 1938 for being part of an “anti-Soviet, nationalist organization,” one of around a quarter of a million victims from Kazakhstan executed during repressions that claimed the lives of almost the entire Kazakh intelligentsia. Many, including Khodzhanov, were officially rehabilitated after Stalin’s death.

The stigma of being relatives of an officially designated enemy of the people cast a long shadow over the lives of Khodzhanov’s children, Tynybekova’s mother Ziba and her two brothers.

“They were expelled from school, then thrown out of the flat and left on the street, because two months later they came for grandmother,” said Tynybekova.

Deemed politically suspect, Gulyandam Khodzhanova was dispatched in a cattle wagon to Karlag, a camp in central Kazakhstan that was part of a sprawling, Soviet-wide archipelago of labor colonies.

Ziba and one brother were taken in by relatives in Alma-Ata, which had by then been anointed capital of Soviet Kazakhstan. She eventually managed to complete her secondary education and embark on a history degree, but was thrown out of the university when it emerged whose daughter she was. Her younger brother was sent to an orphanage, “where it was drummed into the children that their parents were enemies of the people,” Tynybekova explained.

Khodzhanova spent eight years as a slave laborer in Karlag, before being banished into exile in southern Kazakhstan for three years. She then moved to Alma-Ata to live with Ziba and her family, which was when Tynybekova finally got to know her grandmother.

Khodzhanova did not like dwelling on her horrific experiences, which cast a pall of sadness over the family, yet “she survived,” said Tynybekova. “She was a strong-willed woman.”

In 1953, when Stalin died, her granddaughter witnessed a curious scene.

Khodzhanova, who had lost her husband to the firing squad, been incarcerated in the Gulag and seen her family ripped apart because of Stalin’s repressions, wept copiously for days.

“I couldn’t understand it at all,” mused Tynybekova. “Perhaps she was weeping at the way her fate had turned out because of Stalin.”