Kazakhstan: Counting the Costs of Devaluation 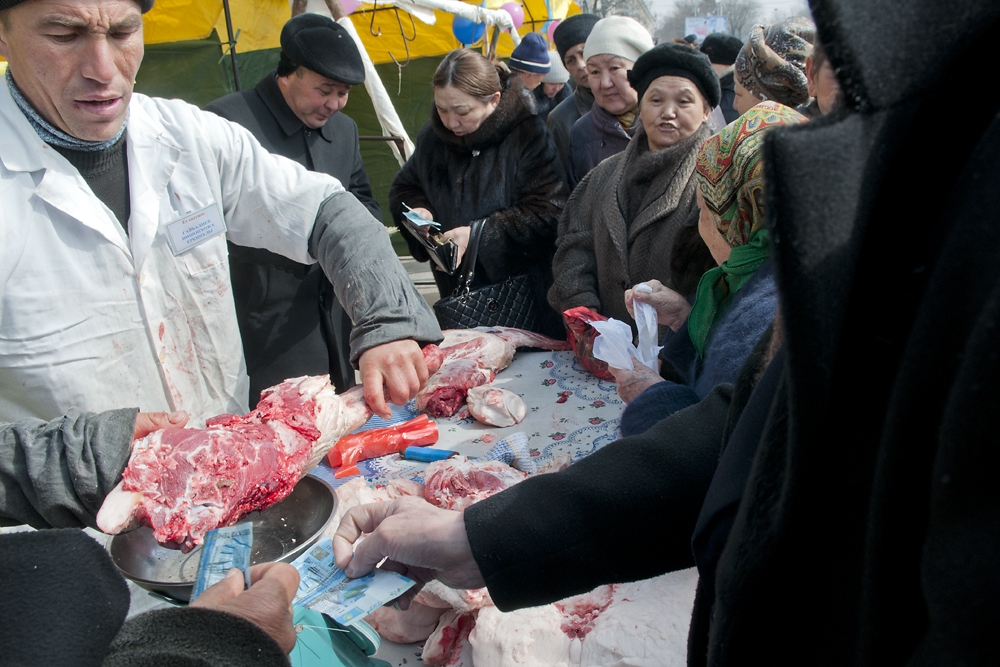 President Nursultan Nazarbayev’s administration in Kazakhstan has weathered the tempest stirred up by the devaluation of the country’s currency earlier in February.  But officials now face a longer-term test as they confront an erosion of public trust.

The Kazakhstani currency, the tenge, plunged 19 percent against the US dollar on February 11, a day now known in Kazakhstan as Black Tuesday. The monetary upheaval came after the National Bank – which had spent months denying devaluation rumors – stopped pouring billions of its reserves into propping the national currency up.

The devaluation posed a serious challenge for the Nazarbayev administration, which casts itself as a guardian of social stability and prosperity. The government reacted quickly to head off an economic crisis, issuing assurances about short-term pain for long-term gain, battling a bank run, and digging deep into its rainy day oil fund to mobilize $5.4 billion for economic stimulus, while facing the sobering prospect of rocketing inflation and faltering growth.

National Bank chief Kayrat Kelimbetov – left to defend fiscal policy while Nazarbayev kept his head below the parapet – compared the devaluation to painful surgery whose benefits become evident after recuperation. “When the patient recovers, everyone goes to their doctor and says thank you,” he told a post-devaluation news conference. “I don’t think there’s any need to thank us, but at least [people] will stop complaining in a year or two.”

Kazakhstani citizens at present aren’t in a grateful mood. The devaluation sparked a rare spate of protests in Almaty, the financial capital. In Kazakhstan’s dollarized economy there were plenty of people who were hit hard by the tenge’s precipitous decline: non-export-oriented firms with costs in dollars but revenues in tenge; savers whose tenge deposits lost a fifth of their value; borrowers whose hard-currency loans became more costly to repay from local currency revenues. Migrant workers from other Central Asian states, earning in tenge but sending remittances home in dollars, also took a hit.

On February 12 around 50 demonstrators besieged the National Bank, interrupting deputy chairman Kuat Kozhakmetov’s attempts to placate them with angry cries of “lies, lies!” Three days later demonstrators turned their ire on Nazarbayev himself (who made his first public appearance only three days after the devaluation), taking up the slogan “Old man out!” at a protest in downtown Almaty. Riot police broke up the rally and arrested 30 demonstrators as around 200 people marched on the main Republic Square.

There were more arrests at a small rally the following day, amid surreal scenes as police marched off three women wearing lacy lingerie on their heads. The quirky protest was inspired by obscure Customs Union regulations on synthetic material used in underwear – but, as participant Yevgeniya Plakhina told EurasiaNet.org, the ironic action was not about lingerie: it was “a symbol of the absurdity which is taking place in our country, including the recent tenge devaluation.”

The “panty protesters” were among 35 people tried on charges of hooliganism and breaching public assembly laws over a weekend of protests: 34 were fined; one was jailed for 10 days. The rallies have petered out. Nevertheless, the outburst of social unrest contrasted with the more muted public reaction that followed the previous devaluation of the tenge back in 2009.

These days, officials are clearly jittery about the potential for social turmoil in Kazakhstan, where memories of fatal unrest in the town of Zhanaozen in 2011 that left 15 dead are still fresh. But the government’s strategy for addressing public dissatisfaction appears to be tightening the clamps on political dissent. Activists’ request for official permission to stage a protest rally on March 1 was turned down by Almaty city hall, which regretted that the venue was already reserved for a “youth patriotic action.”

Cracking down on protests is missing the point, opposition politician Amirzhan Kosanov argued in comments published by the Megapolis newspaper: “Authorities seem not to understand that not everything can be regulated through draconian laws and bureaucratic rules. The more inept they are, the more society will seethe.”

In analyzing the causes of the devaluation, authorities have seemed reluctant to take a close look at their own actions and decisions, and instead have tended to emphasize external factors.

Kelimbetov blamed international market forces for Kazakhstan’s currency woes: US tapering, he said, had led to capital flight from emerging markets, causing downward pressure on the tenge. Meanwhile, the National Bank identified Russian ruble fluctuations as a crucial factor. Although the ruble accounts for only 10 percent in the currency basket to which the tenge is pegged (against the dollar at 70 percent and the euro at 20 percent), Kazakhstan’s tenge historically follows the fluctuations of the currency of major trading partner Russia, Alex Nice, regional analyst at the London-based Economist Intelligence Unit, explains.

“The two countries have similar economic and trading profiles,” Nice told EurasiaNet.org. “Both are raw material exporters whose external sectors tend to be influenced in the same ways by changes in the global economy. So what’s good for the Russian economy tends to be good for the Kazakh one too.”

Another important factor that officials haven’t played up as much is a government desire to protect large-scale exporters. Russia – a member of the Customs Union free trade zone alongside Kazakhstan – is “one of the biggest consumers of Kazakhstan’s non-oil exports,” said Nice, and “when the ruble weakens… the terms of trade for Kazakhstan’s non-oil sector worsen, putting Kazakhstan’s manufacturing sector under pressure from Russian competitors.”

Large-scale exporters, particularly natural resources giants, stand to benefit from the devaluation, given that their products are now significantly cheaper on international markets. Four big exporters (Kazakhmys, ENRC, ArcelorMittal and Kazzinc) quickly moved to stem potential labor unrest by announcing 10 percent salary rises from April 1, a move designed to partially offset the negative effects of devaluation for workers. In another measure to reduce the potential for unrest, Nazarbayev has ordered increases in public-sector salaries, pensions and welfare payments, starting on April 1.