Kazakhs unable to travel abroad are discovering their country is full of nice places to vacation. But what’s good for the local economy is not always good for nature. 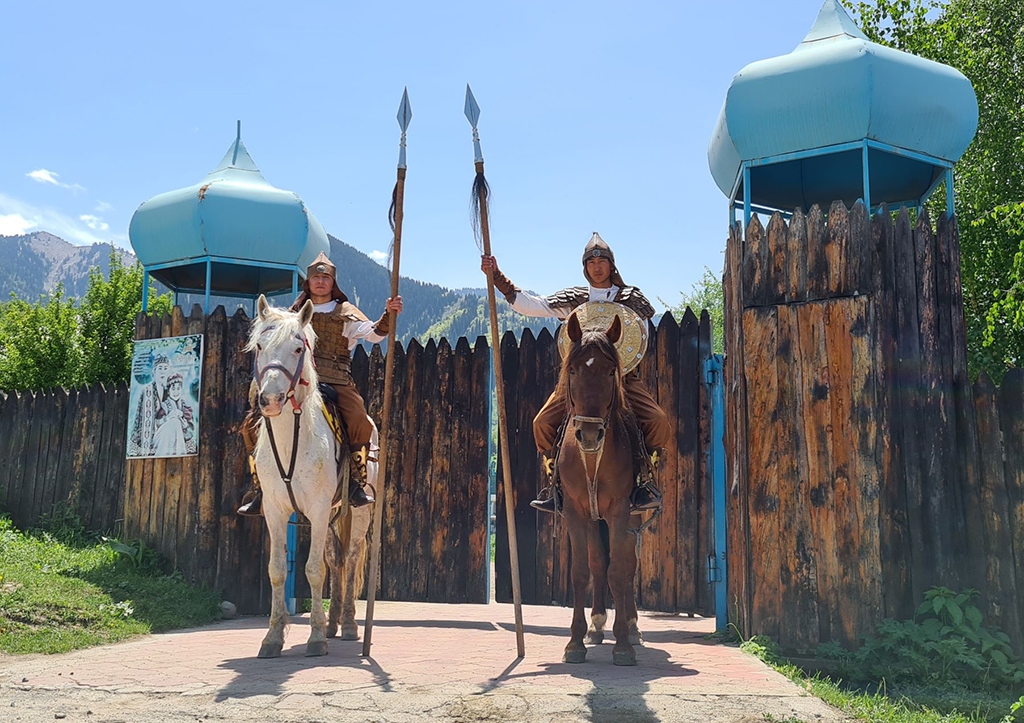 Outside the Huns ethnographic recreation park (Photos by Almaz Kumenov)

With their spears and shields, the two men in chainmail guarding the nomad homestead were a menacing sight.

There was nothing to worry about, though.

“Welcome,” said one guard cheerfully, as they parted to clear a passage for visitors.

A scene from ye olde Kazakhstan lay beyond. Young women in traditional dress, felt yurts, and heated beshbarmak – a dish of pasta squares and hunks of horsemeat – steaming invitingly on platters. An imposing grandmother figure and her two assistants thrashed sheep’s wool for bedding, just as their ancestors might once have done. 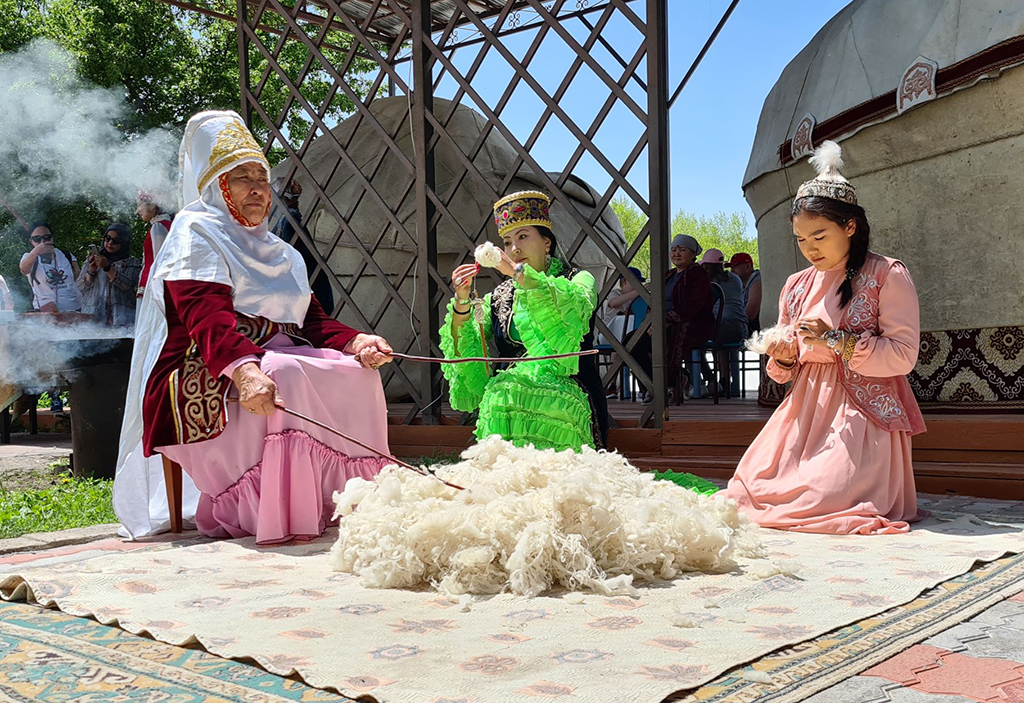 The Huns ethnographic recreation park, set in the picturesque foothills around 35 kilometers from Almaty, has been doing roaring business this year. In normal times, the visitors would be a mix of foreigners and locals. Kazakhs escaping the bustle of the city are now dominating.

One visitor interviewed by Eurasianet, Anuar, came from Almaty with his wife and son and rented a yurt.

“This is cool. It’s relaxing, there’s a colorful atmosphere and delicious food,” he said. “Even though I am Kazakh, and there is nothing new about this for me, there is a lot to impress. I am recharged with energy.”

Asel Alisherova, the director of Huns, spoke to Eurasianet in the clothing customarily donned by the nomadic matriarch, the baibishe. At times, she broke off to issue commands to her team into a radio, somewhat breaking the spell.

“We used to have mostly foreigners, but recently we have been welcoming more local tourists,” she told Eurasianet. “Kazakhs have become more interested in nomadic life and traditions. They enjoy our cultural shows and the national games.” 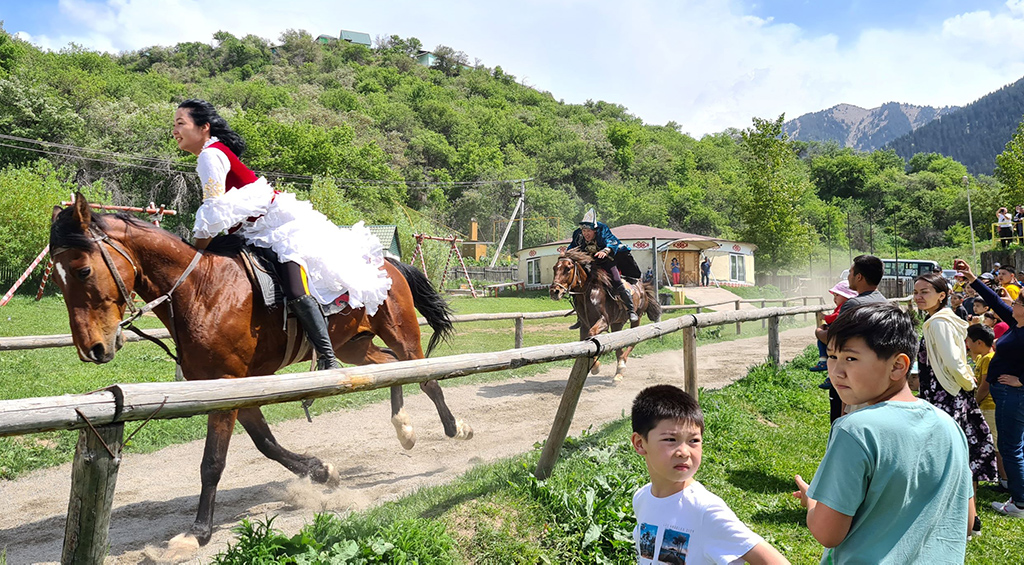 There may be COVID-19 to thank for this.

The government introduced and strictly maintained travel restrictions on foreigners soon after the global pandemic was declared. The visa-free regime applied to many countries was dropped and getting that visa has been made unfeasible for most casual travelers.

Meanwhile, Kazakhs who might once have sought to buy cheap package deals in Turkey, Egypt and Thailand have been looking closer to home for places to have a break. Wild, open nature, of which Kazakhstan has plenty, tends to have the most appeal.

For people living in the capital, Nur-Sultan, the easiest option is the Burabai National Park, a three-hour drive to the north. Almaty denizens have the Ile Alatau mountains right on their southern doorstep.

Guesthouses and hotels in either of those places have been enjoying boom times. Last summer, guesthouses in Zhaidakbulak, a mountain village above the Charyn Valley, not far from the Kyrgyz border, were fully booked for weeks in advance. That rarely happens. And it has happened again this year.

Internal tourism should technically have been crimped by restrictions on the circulation of public transport. But as Finprom, a market research agency, has noted, personal car use for travel within the country increased by one quarter year-on-year in 2020. Use of other, unspecified forms of transport increased by almost 80 percent.

In May, Culture and Sports Minister Aktoty Raimkulova said that Kazakhstan’s resorts took in 45 percent more people in 2020 than they did the previous year.

“The past year has shown us all how popular domestic tourism has become in the face of restrictions on movement between countries,” Raimkulova said.

The trend is holding. Ulzhan Sarsenbayeva, who runs traveloperator.kz, an Almaty travel agency, said that a government decision to cancel flights to Turkey in May, prompted by an increase of coronavirus cases there, led to a new surge of interest in local destinations.

Train tickets from Almaty to Alakol, a lake in the southeast, sold out for weeks in advance. Guesthouses quickly booked out, and prices for whatever accommodation was left spiked.

“More and more people are beginning to realize that there are many great vacation opportunities in Kazakhstan, too,” Sarsenbayeva told Eurasianet.

The authorities are eager to build on this accidental turning point, although not always in ways to people’s liking.

Raimkulova has said that developments planned for the Caspian shore in coming years include a theme park and multiple international hotels build by the likes of Fairmont Hotels & Resorts and DoubleTree by Hilton. Last July, former President Nursultan Nazarbayev oversaw the opening of the Rixos Water World Aktau, a five-star luxury resort in western Kazakhstan.

Turkestan, a region in the south, is being eyed as a destination for heritage and religious tourism. The ribbon was cut in April on Keruen-Saray, a self-contained resort that includes hotels, places of worship, spas, bazaars, and entertainment facilities. The $200 million complex has optimistically been dubbed “Kazakhstan’s Venice,” on account of how it has been built on a system of canals, but while that famous Italian city has survived for centuries in challenging conditions, there are concerns that Keruen-Saray is already crumbling.

One project that has drawn heated public opposition is the planned “safari hotel” on a spot by the Bozzhyra escarpment, a pair of towering, rocky fingers in the heart of the Ustyurt Plateau in the western Mangystau region, which are featured in so much of Kazakhstan’s tourism literature. Work there is at a standstill for now, but it is unclear whether activists will be able to halt developers for much longer.

Striking the right balance between boosting the leisure sector and preserving what makes the country’s landscape so attractive in the first place is not easy.

In summer last year, large numbers of residents of Nur-Sultan intrigued by photos they had seen online headed for the distinctively pink Kobeytuz lake, a couple of hours east of the city. What began as a trickle fast became a deluge. Before long, visitors began damaging the lake’s delicate ecosystem by, among other things, dropping large amounts of trash and hauling away bags of natural salts present on the shore.

Dismayed officials then had to ban people from the spot.

It is a similar story in Tien-Shan mountains overlooking Almaty. Before taking out groups of tourists toward the Kolsay Lakes National Park late last summer, expeditions organizer Pavel Shitik went on a reconnaissance mission. In addition to the discarded plastic bottles and paper napkins he normally finds he has to gather, there was a new item of trash: masks. Writing on Facebook, he vented his exasperation at this relentless occurrence.

“What’s the reason for this? Cultural attitudes, education, manners or the lack of love [for nature] among tourists who come to relax here…?” he mused.

Sarsenbayeva tends to agree and says that the development of domestic tourism will require the formation of new attitudes.

“The emergence of modern tourism projects in Kazakhstan is great, but it’s time for our people to realize they have to take responsibility, and for them to learn how to truly love and appreciate nature and their native land,” she said.