Kazakhstan: De-Nazarbayevification picks up steam, but is it just for show?

A post-protest moment to demolish the Nazarbayev personality cult has generated considerable exuberance, but there are those who remain skeptical it will translate into real change. 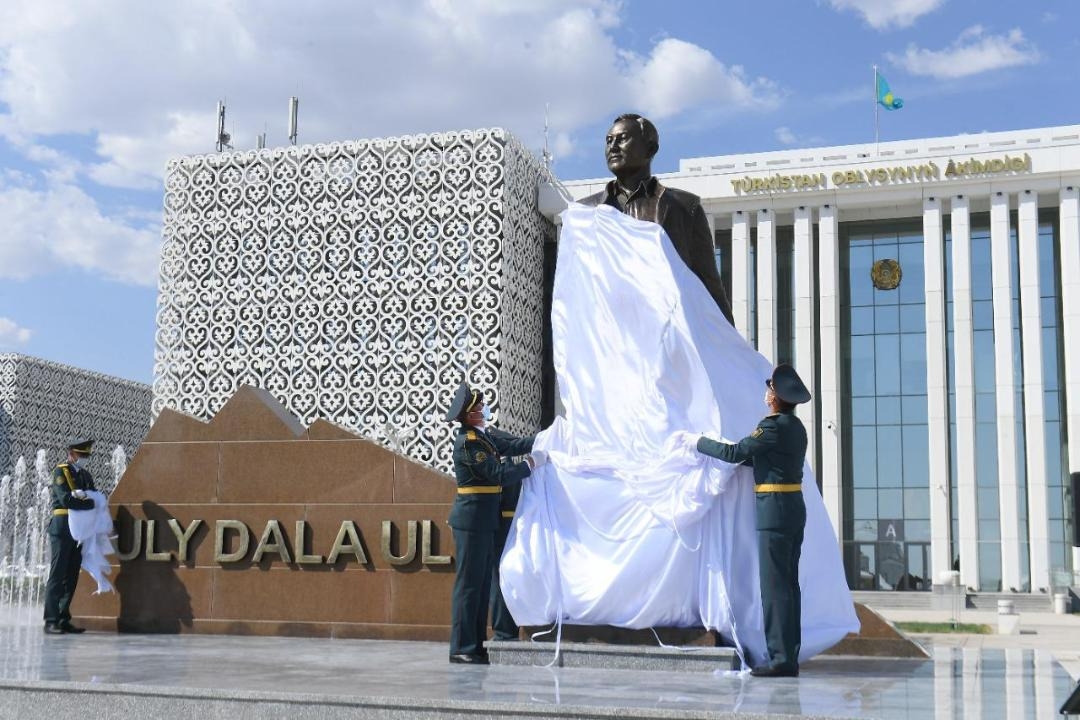 This statue of a “pensioner” was unveiled last year in Turkestan. (government handout)

When anti-government demonstrations began rippling through the country earlier this month, much of the anger seen on the streets was directed specifically at former President Nursultan Nazarbayev and the crony capitalism he is perceived as having cultivated.

The 81-year-old stepped down in 2019, but most Kazakhs continued to see him as the real power behind the throne. This protest season has forced a reckoning, however.

Spooked by the show of public discontent, the government has quietly begun dismantling the cult of personality devoted to Nazarbayev.

At the height of Nazarbayev’s pomp, statues of him were put up around the country, streets were named in his honor, and his image was reproduced on banknotes. The ex-leader has been subject of many hagiographic movies, plays and books. When Kassym-Jomart Tokayev took up his post as the hand-picked successor president, he declared that the capital, then called Astana, would be renamed Nur-Sultan.

It was Nazarbayev himself who seemed to be admitting defeat this week, when he delivered a brief video message to urge people not to think of him as a person in high office. He is now just a mere pensioner enjoying a well-earned rest, he said. (This was untrue until as recently as January 5, however, when he was replaced from his powerful post as head of the security council by Tokayev).

The end of the Nazarbayev cult of personality has been made evident in many ways:

On January 18, Kanat Nurov, a member of the Majlis, the lower house of parliament, announced on Facebook that lawmakers had approved constitutional changes to strip Nazarbayev of several lifetime appointments.

The former president will no longer head the security council, a body that oversees the security apparatus, or chair the People’s Assembly of Kazakhstan, a state-coordinated body whose existence is intended to support interethnic harmony. The Senate will be charged with making a final determination on this move.

Nurov stressed that the job of helming those bodies would, “as is right, be delegated to the president – in keeping with his position, not his identity.” This was unusually brazen talk. Neither Nurov nor any of his fellow lawmakers would have allowed themselves such insolence until a few weeks ago.

Nazarbayev has ceased to become the untouchable and unnamable. Under bespoke changes to the constitution adopted in 2010, it became an offense to besmirch the honor and dignity of Kazakhstan’s First President, as Nazarbayev was formally known. What constituted an assault on Nazarbayev’s honor was very much in the purview of the courts, which are heavily beholden to the executive. In effect, the legislation banned any investigate journalism into the very substantial wealth controlled by the president and his family. Almost all Kazakhstan-based media outlets exercised rigorous self-censorship for fear of punishment.

Even regular individuals daring to speak ill of Nazarbayev faced potential consequences. But that is now changing.

Late last year, a well-known marathon runner, Marat Zhylanbayev, got into hot water by publicly criticizing the former president on social media. In one post titled “This is not Nazarbayev’s land,” Zhylanbayev wrote: “There is no room for Kazakhs to live in Kazakhstan. You cannot even say the smallest truth. Because the only people who are allowed to live are ass-kissers and sycophants, it is sickening to have to even look at their faces.”

In the event, it was not Nazarbayev or his office that filed suit against Zhylanbayev. The cudgel was instead taken up by a strange, purportedly nongovernmental group called Ar-Bedel. The organization, which was founded in 2020, bills itself as a human rights advocate. But there is only one human being it appears interested in advocating for: Nazarbayev. Since it was founded (and under the directorship of an officer in the security services-run border force, as it turns out), Ar-Bedel has initiated multiple legal cases against more than a dozen people for supposedly disrespecting the First President, or Elbasy, leader of the nation, as Nazarbayev has been dubbed by the state propaganda machine.

In a sign of which way the winds are now blowing, Zhylanbayev on January 19 got the news that Ar-Bedel has dropped its case.

Nazarbayev is no longer off-limits.

The street signs and at least one statue have gone too.

As the demonstrations in Almaty turned destructive, some in the crowds targeted name signs on one particular thoroughfare: Nazarbayev Street. That road, perhaps the smartest one that Almaty had long born the name Furmanov, so called in honor of a relatively obscure Bolshevik revolutionary. Almaty residents long presumed the street would one day be renamed after Nazarbayev, although there was some doubt whether that would happen before or after his death. The authorities took the plunge in 2017.

There are hints a reversal may be in the offing. In a news report on state television on January 19, the anchor referred to the street as Furmanov.

Officials, including President Tokayev, have likewise ceased referring to the capital city as Nur-Sultan, preferring instead to call it just “the capital city.” Even Nazarbayev used that bland formulation in his video address.

In Nur-Sultan, as the city is still called for now, the name of the president has disappeared from the façade of the Nursultan Nazarbayev Foundation. And when Tokayev visited the headquarters of the Interior Ministry in Almaty last week, journalists noticed that a quotation by Nazarbayev stamped on the wall of the conference room was now missing the name of its author. 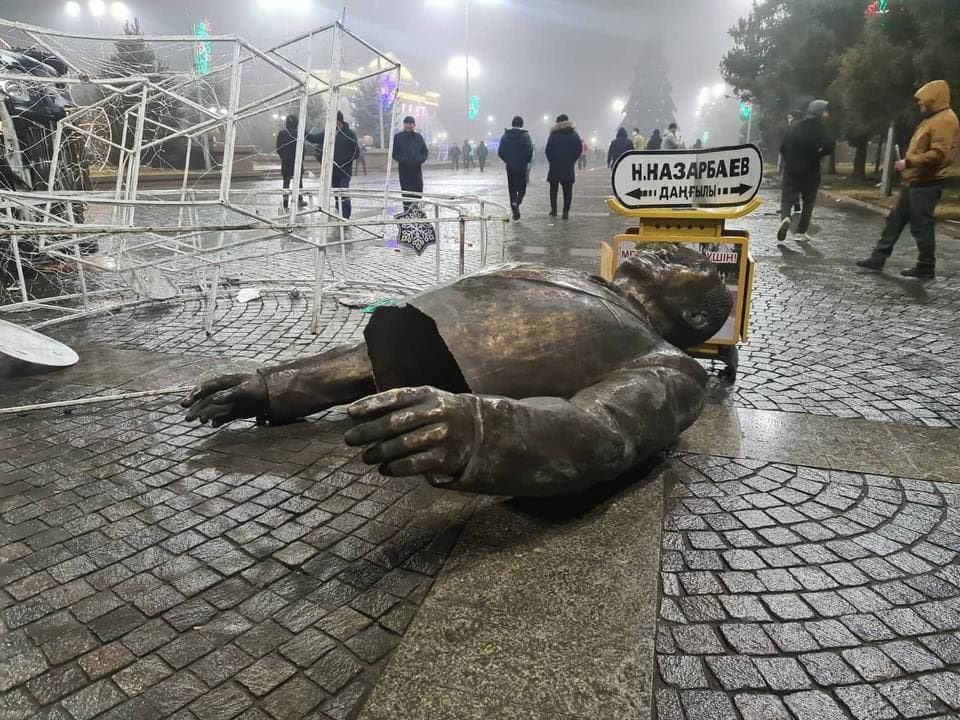 In Taldykorgan, the capital of the Almaty region, demonstrators took matters into their own hands at the height of the protests by pulling down a statue to Nazarbayev. No plans have been announced for it to be replaced.

There are more formal pushes for de-Nazarbayevification coming from the grass roots.

Activists have launched at least two petitions; one demanding the repeal of a law granting Nazarbayev and his immediate family lifetime immunity from prosecution, and another to ask that Nur-Sultan be given back its old name, Astana. The first has collected 25,000 signatures to date. The other has been backed by at least 220,000 people.

Then there are the all-important cronies and relatives.

Some, like former head of the powerful National Security Committee, Karim Masimov, have been arrested and are facing treason charges over presumed involvement in the recent unrest. One of Masimov’s deputies, Samat Abishev, a nephew of Nazarbayev’s, was merely dismissed.

On January 17,  Timur Kulibayev, the multibillionaire husband of Nazarbayev’s second of three daughters, Dinara, resigned as chairman of Atameken, an influential business lobby group. He had been at the helm of the group for eight years. Two days earlier, another two Nazarbayev sons-in-law were squeezed out. Dimash Dosanov, the husband of Aliya Nazarbayeva, quit his role as KazTransOil chairman, while Kairat Sharipbayev, the rumored husband of Dariga, the oldest daughter, stepped down as chairman of QazaqGaz (formerly KazTranGaz).

As for Dariga Nazarbayeva, who is an MP, she has failed to turn up to any hearings of parliament since the trouble began earlier this month. Her spokespeople have claimed she contracted COVID-19.

This post-protest moment has generated considerable exuberance, but there are those who remain skeptical that the demolition of the Nazarbayev cult will translate into real change.

When the former president made a point of stating in his video message that claims of elite infighting were untrue, some analysts concluded that this simply meant that horse-trading for posts and access to cash was going on in the background.

“The groups in power have just come to some agreement between themselves on how to divvy up property,” Danil Kislov, editor of Moscow-based news outlet Fergana, wrote on Facebook. “Big Nazarbayev (him, his relatives, and all their money and influence) are going nowhere for now. They are just quitting their jobs to distract attention.”