Kazakhstan: Debating the Fruits of the Customs Union 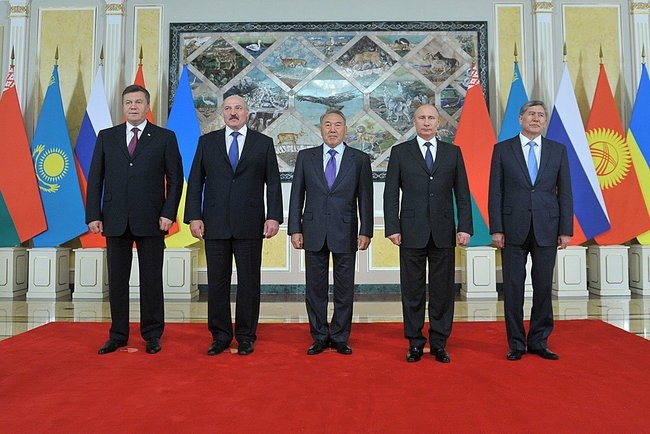 Kremlin kingpin Vladimir Putin’s pet project to drive former Soviet states back into Moscow’s embrace – via the Customs Union -- is gathering momentum. But the possibility of expansion doesn’t thrill all the union’s current members.

Armenia, Kyrgyzstan, and Tajikistan are presently expressing varying degrees of interest in joining founding participants Russia, Belarus and Kazakhstan in the union. The prospect of a doubling of the membership is reigniting debate in Kazakhstan about the merits of economic integration with its former colonial master.

Supporters argue that it offers unprecedented opportunities to tap into new markets; opponents counter that Russia is swamping Kazakhstan’s economy – and some are convinced the union is a backdoor bid by Moscow to reestablish Russian regional hegemony.

“It does seem to be Putin’s political project of reversing the ‘geopolitical catastrophe’ of the 20th century, the collapse of the USSR,” Nargis Kassenova, Director of the Central Asian Studies Center at Almaty’s KIMEP University, told EurasiaNet.org.

“Clearly,” she added, “the integration project is not propelled just by the irresistible attractiveness of the Russian economy.”

Putin makes no secret of his ambitions. Two years ago he sparked a furor by setting out his vision of a Eurasian Union rising out of the ashes of the former Soviet Union – comments that prompted then-US Secretary of State Hillary Clinton to accuse him of seeking to “re-Sovietize the region.”

A version of Putin’s heady dream is just a couple of years away: in 2015 the Customs Union is expected to gain greater powers and be renamed the Eurasian Economic Union.

Many commentators in Kazakhstan fret that the Eurasian integration project is going too far, too fast. Analysts also suggest it is feeding Kazakh nationalist tendencies. “In Kazakhstan, the topic of the Customs Union has turned into a symbol of Russia and all that is Russian,” Vasiliy Misnik of Almaty’s Institute of Political Solutions think tank told Ekspert magazine in July. Nationalist forces are harnessing the union as a “bogeyman” to rally support, he added.

President Nursultan Nazarbayev, a staunch Russian ally, has been a driving force to date in post-Soviet integration projects, but even he has become cautious in his pronouncements. In May, he specified that there were “no plans to give political functions [to the union] that would encroach on the states’ independence.” The union, he emphasized, is about “purely economic integration” based on “pragmatism and mutual advantage to all the states.”

Critics are quick to question what benefits Kazakhstan has reaped from membership. They also point out that Astana has already experienced one major disadvantage -- a derailed bid to join the World Trade Organization. Russia joined last year and Kazakhstan hoped to do so this year, but the WTO said in July this was unlikely due to “discrepancies” between the country’s agreements with WTO members and its Customs Union commitments.

Increased trade with other member states was touted as the chief benefit of Customs Union membership – but official statistics show that so far the result has been a flood of imports into Kazakhstan from Russia.

“The sizes of the economies are dramatically different,” Mukhtar Tayzhan, a prominent Kazakhstani nationalist and Customs Union opponent, said in a May interview with Kyrgyzstan’s Vecherniy Bishkek newspaper. “It’s like letting a schoolboy and a professional boxer into the ring.”

The Customs Union notwithstanding, trade with Belarus remains negligible, at 0.6 percent of Kazakhstan’s total foreign trade last year. The balance of trade is unfavorable to Kazakhstan: exports to Belarus totaled just $90 million in 2012, against $676 million in imports.

One sore point is Russia’s disproportionate earnings in customs duties: Moscow gets 87.87 percent of the fees; Kazakhstan 7.33 percent; and Belarus 4.7 percent.
Despite the unfavorable statistics, public support for the union appears high in Kazakhstan: a poll published last month showed 73 percent of those queried back it.

Yet even government ministers have gripes: Agriculture Minister Asylzhan Mamytbekov complained this week that Russia and Belarus were breaking Customs Union rules to support their agricultural sectors.

Among business executives, feelings are mixed: some complain of being swamped by Russian output; others are delighted with the new trading opportunities the union offers. “We see it as a blessing,” Andrey Lavrentyev, president of Allur Group, which exports cars to Russia, said at the launch of the first Kazakh-assembled Peugeot vehicles last month. “These are not politically correct words. This is real business.”

“The Customs Union did create opportunities for some businesses, particularly those that re-export goods to Russia and Belarus,” Kassenova said, but there are downsides: “Prices on consumer goods imported from third countries went up, gasoline prices increased to a level with those in Russia; and the Kazakhstani economy is increasingly dependent on what is happening in Russia, leaving less room for maneuver by the national government.”

The price hikes stem from the imposition of a common external tariff on non-Customs Union imports, which saw Kazakhstan’s tariffs shoot up from an average of 6.7 percent to 11.1 percent, a World Bank study published last year reported.

The report estimated Kazakhstan was losing approximately 0.2 percent in real income annually as a result of the tariff increase, but suggested that the union has potential for Astana, depending how it develops. Under an optimistic scenario, real income could increase by 1.5 percent of consumption annually, but under a pessimistic scenario it could decrease by 0.3 percent.

Welcoming new members with far weaker economies – Kyrgyzstan and Armenia (which have confirmed their accession bids) and possibly Tajikistan (which has expressed interest) – will have an uncertain impact on the Customs Union, analysts say.

Nevertheless, integration efforts continue – and opponents in Kazakhstan believe expansion has more to do with geopolitics than rational economics. Or, as Tayzhan put it: “This is just Russia’s imperial ambitions, and nothing more.”

Correction: An earlier version of this story misreported figures for trade between Belarus and Kazakhstan. Kazakhstan's exports to Belarus totaled $105 million in 2012, not $90 million; imports totaled $676 million, not $594 million.