Crowds in the commercial capital, Almaty, seized and set light to the city hall. 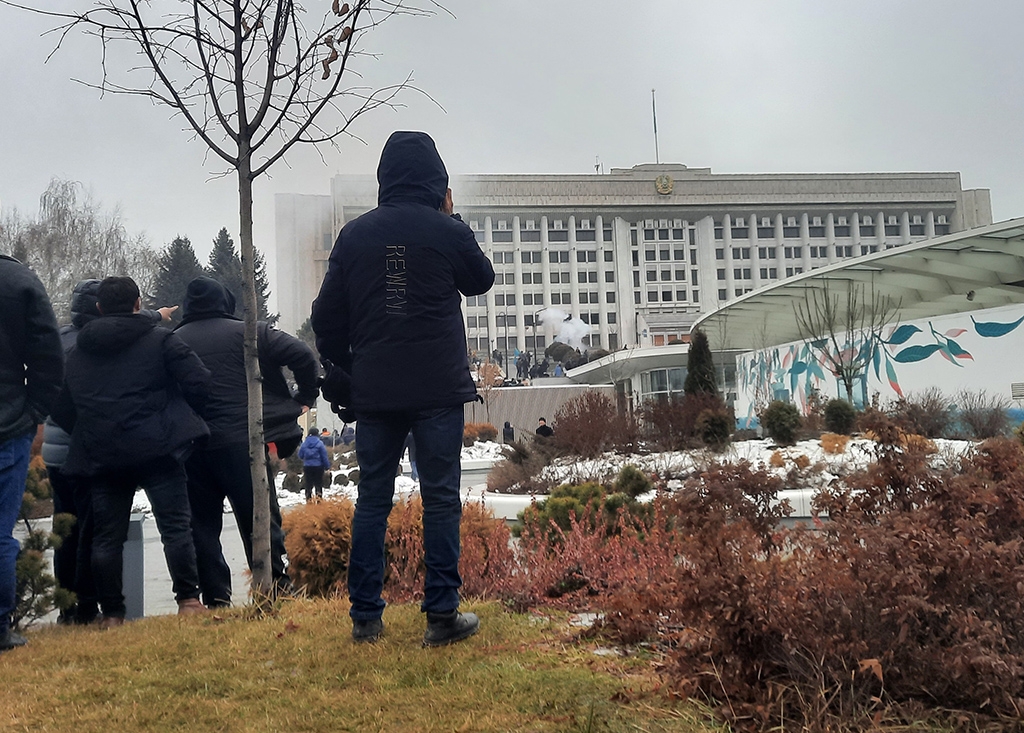 Almaty city hall during as assault by a crowd of protesters. (Photo: Eurasianet)

Anti-government protests in Kazakhstan reached a new peak of intensity on January 5 as demonstrators clashed for hours with riot police and National Guard troops in the country’s largest city, Almaty. Furious confrontations between protestors and the police were replicated in several other cities across the country.

As the unrest escalated throughout the day, authorities pulled the plug on the internet, in effect cutting the country off from the outside world. Telephone connections were also patchy. Almost all local TV stations ceased broadcasting.

In a brief address to the national delivered on a state television station, President Kassym-Jomart Tokayev pinned the turbulence that began over the weekend on what he described as “financially motivated conspirators.” He vowed that the response of the government would be firm and said he had taken control of the powerful Security Committee, which had been chaired by the former strongman, Nursultan Nazarbayev.

“As head of state … I intend to act as robustly as possible,” Tokayev said. “Whatever happens, I will remain in the capital. It is my constitutional duty to be with the people.”

He later appealed to allies in the Collective Security Treaty Organization, a Russia-led security bloc, to send military assistance, which he said was needed "to help Kazakhstan overcome this terrorist threat."

Some of the dramatic events of the day played out in the commercial capital, Almaty. Large crowds were intercepted by police formations in the morning as they moved into central areas of the city, but they managed swiftly to break through the lines. Correspondents for local media reported seeing several police cars that had been set alight. 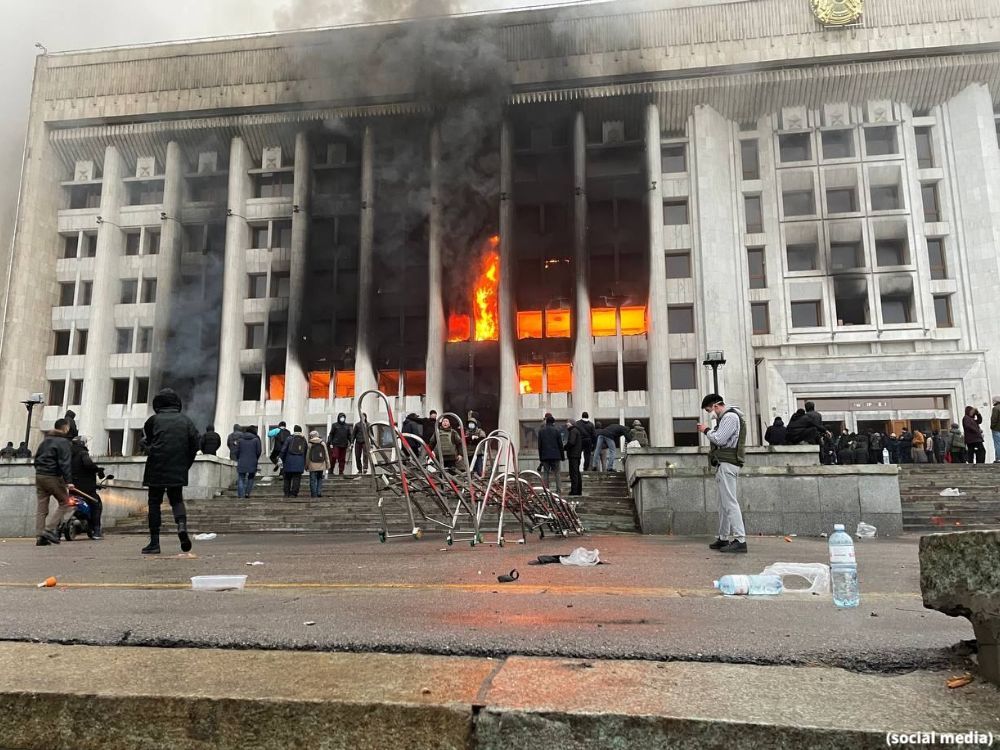 Toward midday, attention turned to the city hall building on Republic Square. A large group of demonstrators numbering in the thousands barged with force through police and National Guard lines to make their way into the premises. Black smoke billowed out of various parts of the building shortly thereafter.

KazTag news agency reported that around 20 National Guard troops were assaulted around the city hall building and that up to five of them were in serious condition.

“The National Guardsmen are trying to evacuate their wounded on their own since there are no ambulances around,” the outlet reported.

After the clashes around the city hall attenuated, crowds began moving in the direction of the president’s Almaty residence, a short distance away.

In another part of the city, the headquarters of the ruling party, Nur Otan, were set alight, according to a reporter with RFE/RL’s Kazakh service, Radio Azattyk. The correspondent said no fire fighters or police officers were present at that site.

Rallies have also been taking place in other regions of the country, including Mangystau, which has like Almaty and the surrounding Almaty region been placed under a state of emergency until January 19.

In Aktobe, a city near Russia’s border, some 1,700 kilometers northwest of Almaty, around 1,000 people had reportedly assembled around the regional administration headquarters and appeared poised to seize the building. News website Orda.kz reported that police in the city were refraining from impeding protestors.

"Police in Aktobe have said that they are with the people and will not raise their hand against them," the website reported.

In yet another part of the country, in the city of Taraz, which is around 400 kilometers west of Almaty, regional governor Berdibek Saparbayev relayed news of substantial unrest. At least 10 police cars were set alight and mobs attacked the regional administration building and a local bank, Saparbayev was cited as saying by privately owned TV station KTK.

“In our view, hundreds of young people have fallen under the influence of some group. I urge everybody to resist provocation and to restore calm,” Saparbayev said.

Anti-government sentiments are spreading into important economic concerns as well. A group of workers at the giant Tengiz oil field in the west have reportedly held pickets and are refusing to go to work.

"Negotiations are underway with the demonstrators. So far, everything is calm. Some have even dispersed,” Tengizchevroil, the company operating the field, told Interfax-Kazakhstan news agency.

Health officials in Almaty said 190 people, mostly police officers, were being treated at the city’s hospitals for injuries sustained during the night’s unrest. Four of the seven people in intensive care are police officers, the official said.

In a desperate scramble to contain mounting tempers, President Kasym-Jomart Tokayev began the day by accepting the resignation of the Cabinet. Alikhan Smailov, the outgoing first deputy prime minister, will take over as head of the government.

This indicated a more conciliatory line from the one that Tokayev was adopting on January 4, when he warned of consequences for troublemakers.

“Do not succumb to provocations from within and outside the country,” he said. “Exhortations to attack civilian and military facilities are absolutely unlawful. This is a crime that will be punished.”

The string of rallies that has torn through Kazakhstan since January 2 began in the western oil town of Zhanaozen and were ostensibly triggered by anger over a sudden spike in the price of car fuel. Similar impromptu gatherings then quickly spread to nearby villages in the Mangystau region and then in multiple other locations in the west, in cities like Aktau, Atyrau and Aktobe. By January 4, rallies of varying size were occurring in dozens of villages, towns and cities.

While the fuel price rises were the initial trigger for the unrest, protests have evolved into a generalized surge of long-contained anger at perceived misrule and corruption. Pledges by the government to restore fuel subsidies have had no effect in containing the escalation of rallies.

Updated with details about internet disconnection and statements from president.