Kasymov has reached retirement age, but the timing of his departure has set tongues wagging. 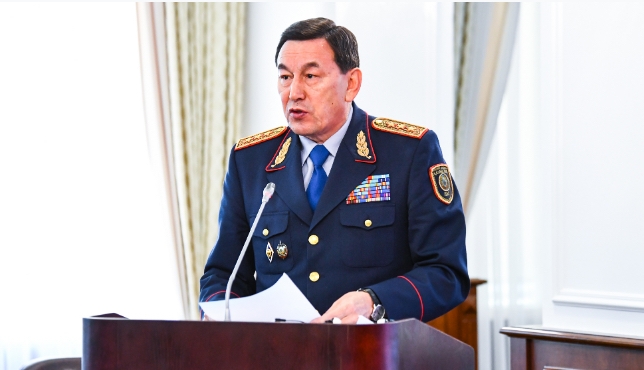 Resignations and dismissals among the president of Kazakhstan’s security detail in recent days are sparking speculation that the personnel reshuffle may have come in response to revalations about snooping conducted by Israeli surveillance firm NSO Group on several senior Kazakh officials.

President Kassym-Jomart Tokayev’s office on July 30 announced the dismissal of Kalmukhanbet Kasymov as chief of the presidential security service. No reason was provided for the firing.

Kasymov, 64, had been in the job since January 2020. He did a nearly two-year stint as secretary of the national security council before that, a post he took up after eight years in charge of the Interior Ministry.

At the start of this week, Kasymov’s deputy, Talgat Mukhtarov, announced that he was resigning “in connection with a transfer to another job.”

Kasymov’s long tenure as interior minister is not generally well-regarded. He had been in the job for only a few months by December 2011, when police officers opened fire on unarmed protesters in the oil town of Zhanaozen, killing at least 16 of them. He took personal charge of the investigations, which culminated in multiple protestors being charged and a handful of police officers receiving light sentences.

The end of his tenure was no less troubled. The random murder in Almaty of star ice skater Denis Ten sparked a wave of outrage over the failure of police in Kazakhstan’s largest city to deal with petty street crime and brought about calls for Kasymov’s ouster.

Kasymov eventually left his Interior Ministry perch in January 2019, but his perceived loyalty to former President Nursultan Nazarbayev appears to have served him well and ensured his promotion to more prominent security posts.

His removal from his job as head of the presidential security detail might have gone largely unnoticed had it not come so close on the heels of reports alleging that Tokayev had before coming to office been targeted for eavesdropping by the NSO Group. Other officials targeted for similar treatment were Askar Mamin and Bakytzhan Sagintayev, the current and a former prime minister, respectively.

The NSO Group’s so-called Pegasus snooping software works by installing itself on the telephones of unsuspecting targets and gives snoopers access to all data on the device, including exchanges on messaging apps protected by encryption. The software is reportedly even able to turn the phone into a bug as it can turn on the microphone and camera to capture conversations, enabling a deeper level of surveillance than even the most invasive security services normally have at their disposal.

The mystery in Kazakhstan is who might have ordered the snooping, and why?

In an article published on July 30, independent journalist Gulnara Bazhkenova offered her theory. The spying, she claimed, although without providing evidence, was done at the behest of Karim Massimov, the head of the Committee for National Security, or KNB, the successor agency to the KGB. The removal of Kasymov and his deputy are directly related to the Pegasus affair, she argued.

The period of alleged surveillance on Tokayev, however, covered a period prior to his becoming president – or Kasymov taking up the security detail job for that matter. The snooping on Mamin and Sagintayev too happened before they assumed their most important jobs, suggesting that the probing might have been part of a vetting procedure.

There has been barely any official response to the Pegasus revelations, other than dismissive remarks from Dauren Abayev, the first deputy head of the presidential administration, a figure known for his closeness and loyalty to former president Nazarbayev. In an interview to state television on July 22, he described the reports on the surveillance program as “intriguing,” but derided them as being unsubstantiated by any evidence.

The Organized Crime and Corruption Reporting Project, which is spearheading the reporting on the Pegasus program, is slowly revealing more Kazakh figures caught up in the listening campaign. One notable new figure is the Europe-based opposition figure and disgraced banker Mukhtar Ablyazov.

Others are businesspeople known to be loyal to the government, however.

This latter fact has prompted Bazhkenova to argue that the security services, on whom she pins the snooping campaign, is interested more in monitoring the activities of allies than that of the opposition.

“The more power and money you have, the more vulnerable you are in Kazakhstan,” she concluded.