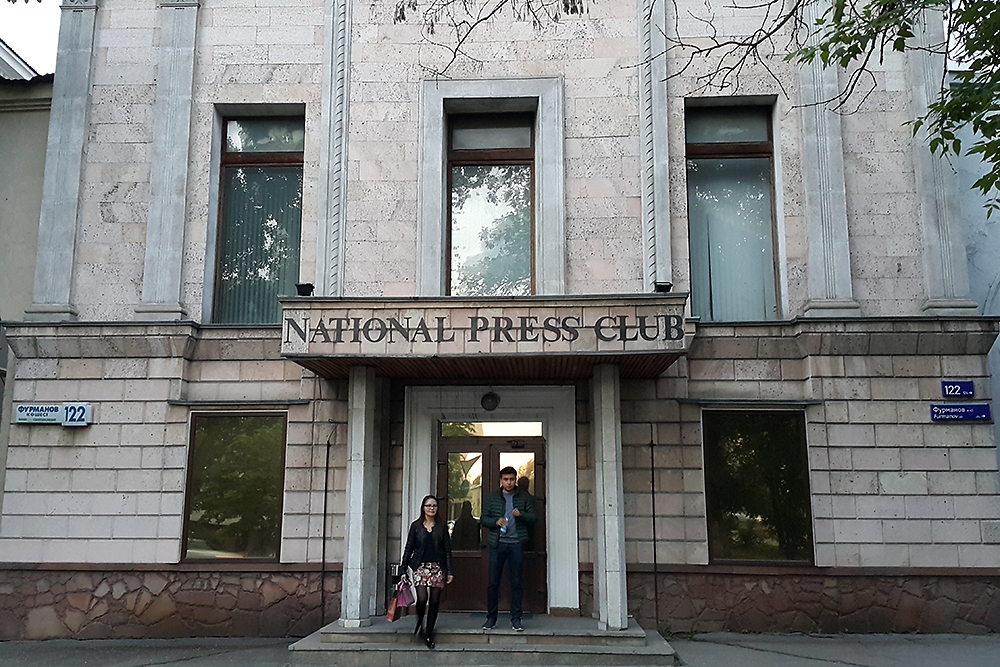 Prominent Kazakh journalist Seitkazy Matayev, head of the National Press Club in Almaty, was arrested in February and charged with various counts of fraud and embezzlement. Government investigators claim the fraud involves the KazTAG news agency, which is run by Matayev’s son. (Photo: Aktan Rysaliev)

A government program in Kazakhstan intended to generate good news has produced only negative headlines of late.

In February, authorities arrested prominent journalist Seitkazy Matayev on various charges of fraud and embezzlement. One line of inquiry involves the alleged misappropriation of hundreds of thousands of dollars in funds handed out as part of a program popularly known as the state order.

The case is drawing increased attention to what the government casts as a measure to aid the development of media, but what critics deride as little more than a Soviet-style mechanism for producing rose-tinted accounts of current events.

The system for subsidizing media in Kazakhstan was established in 2010 and consolidated several other lines of funding for government-friendly outfits. State media outlets get expenses covered through the system, while private sector peers are required to compete for allocations.

The fraud allegedly perpetrated by Matayev is said by investigators to have dated from 2010 through 2015. Over that period, the Communication, Informatization and Information Committee concluded five deals with the KazTAG news agency, which is run by Matayev’s son, Aset. Senior managers in the committee also facing prosecution reportedly told investigators that Matayev allegedly used his influence to sideline rivals for government tenders so that KazTAG secured the contracts.

KazTAG representatives declined to comment to EurasiaNet.org about the investigations.

Some of the criminal complaints against Matayev, who is president of the National Press Club and head of the Union of Journalists, highlight shortcomings of the state order.

Some of KazTAG’s revenue is raised from subscriptions. But investigators argue that the agency acted fraudulently when it put articles paid for by government telecommunications company Kazakhtelecom behind its paywall. Investigators say KazTAG received 260 million tenge ($775,000 at the current rate) from Kazakhtelecom to publish the material.

Media sector observers contend that when the government pays websites and television station to publicize its own policies and achievements, it acts as a disincentive for media to improve under its own steam and compete for advertising revenue. “If you consider that the amount (of money) spent by the media state order is larger than the entire advertising industry of Kazakhstan, you start to understand that the mass media market has been deformed and undermined,” said Diana Okremova, head of the Legal Media Center foundation.

The specific items paid for through the state order are never explicitly identified, but they seem easy to spot and usually consist of wordy primers on government programs or laudatory accounts of economic developments and the work of state employees. A piece published in state newspaper Kazakhstanskaya Pravda in December, titled “A Crisis Is a New Opportunity,” captures the style well in its praise for President Nursultan Nazarbayev’s administration and government policy in general.

News is strictly filtered, according to those tasked with creating the content paid for by the state. “When we fulfill the state order, nobody in government tells us what and how to write, and they also do not impose restrictions or prohibitions,” Sergei Nesterenko, deputy editor of Kazakhstanskaya Pravda newspaper, told EurasiaNet.org. “There is a system of self-censorship. We know from experience what to report, and what not to report.”

The most distinctive feature of the state order, however, is the lack of transparency. Little to nothing is known of how decisions are made about whom to finance and why.

“At the start of the year, we received, after five years of making inquiries of government bodies, a response from the Finance Ministry with concrete sums about state orders,” Okremova said. “If in 2010, the [Communications Committee] poured 17 billion tenge into the media, in 2015 that figure had reached 43 billion tenge. … If you then add local state orders (from regional authorities), the sum climbs to 45 billion tenge. For that kind of money, you could build about 30 schools.”

Okremova said 10 media outlets receive the funding without having to compete for it, while others have to go through the tender process. The latter account for about 10 percent of overall funds allocated, she said.

According to a recent analysis by the Almaty-based MediaNet International Center for Journalism, about 70 percent of media organizations in Kazakhstan somehow receive funds via the state order. And that number is growing.

Financial agreements with recipient outlets detail what is to be provided in terms of column-inch space in newspapers, or minutes of broadcast time. The outlet is then required to provide the government with a summary of how it has fulfilled its contractual duties.

The Communication Committee does not make internal reporting on the state order available to the public, citing confidentiality provisions.

The state program distorts the media market by keeping outlets that otherwise would fail on life support. Speaking at a media conference in November, Katerina Myasnikova, director of Ukraine’s Independent Association of Broadcasters, painted a stark picture based on her own country’s experiences.

“When you work by the state order, you never think about what your audience expects of you,” Myasnikova said in remarks cited by Forbes Kazakhstan. “The audience of large subsidized media companies drops daily and when you cut off their financing, they don’t survive long.”