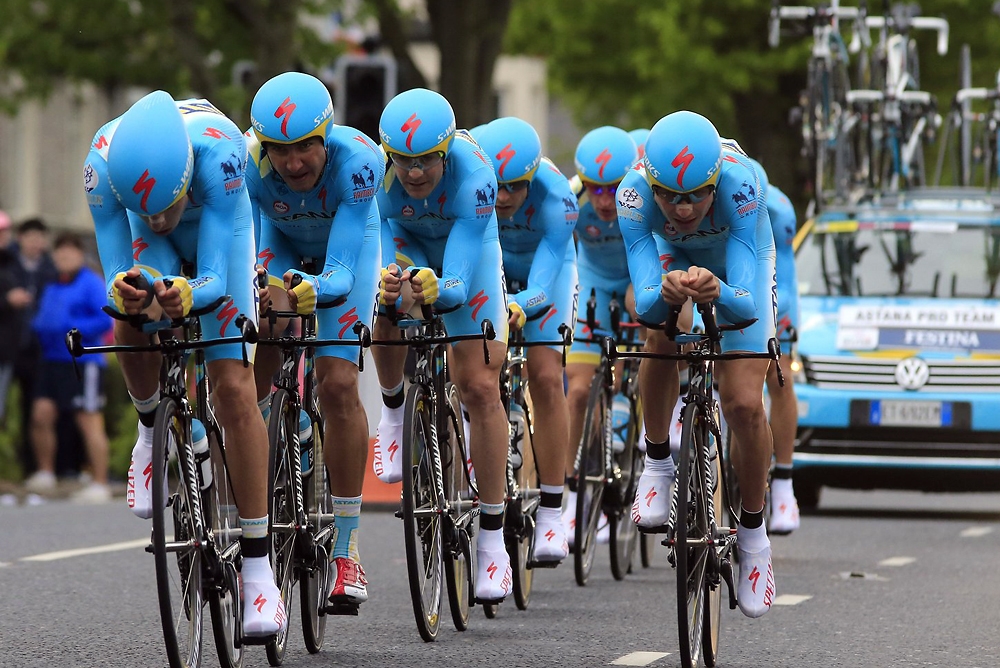 Kazakhstan’s flagship international cycling team will have to sweat it out until February to see if it can compete that year in major international road races, including the Tour de France. A series of doping scandals has tainted the team. But where international sports officials see serious infractions, Kazakhstanis tend to see an international plot to steal their glory.

The UCI has awarded the team a provisional license for the 2015 World Tour on condition that an independent body, the University of Lausanne’s Institute for Sport Sciences, carries out an audit of the team’s management practices. Specifically, the audit will seek to determine the extent of management’s responsibility for the doping failures and what changes have been made to prevent future instances of doping. The Institute is due to report its findings in February.

“In the case of the Astana Pro Team, this remains a very serious situation for our sport given the number of doping cases,” said UCI President Brian Cookson in a statement released after the December 10 ruling.

Cookson added that he considered the team “on probation” until the audit is completed.

Astana’s latest troubles began when rider Valentin Iglinsky tested positive in August for EPO, a banned substance that boosts production of red blood cells. He admitted guilt and was kicked off the team.

In October, officials announced that Iglinsky’s elder brother, Maxim, who was part of Team Astana’s Tour de France squad this year, had also tested positive for EPO. He was suspended. In addition, three members of Astana’s second-tier Continental Team, which feeds into the main group, tested positive for anabolic steroids this year.

Astana Pro Team Manager Alexandre Vinokourov, the face of Kazakhstan cycling internationally, insists that the skein of positive tests is an aberration. “In the last week, there have generally been a lot of lies told against us,” he told sport.zakon.kz on December 11 after UCI’s decision on the provisional license. “Someone clearly didn’t want Astana to get a license.”

Vinokourov dismissed suggestion that the constant scandals are indicative of an institutionalized problem. He claimed that the UCI ruling proves “this is not systematic doping, this is a one-off situation, an Iglinsky brothers’ family one, shall we say.”

Doping is nothing new in Kazakhstan. When Astana entered the world of cycling sponsorship in 2006, the problems were already clear. In 2006, Vinokourov secured funding from his native Kazakhstan for his Liberty-Seguros team, which was based in Spain, after its backers bailed over a doping scandal.

The following year, Team Astana was born from the ashes of Liberty-Seguros and awarded an UCI World Tour license, allowing it to compete in the top-flight of international cycling. During the 2007 Tour de France, Vinokourov tested positive for illegal substances following a blood transfusion. He and his team were banned from the Tour that year; his team was also banned the following year and he for two more years.

Under new management and with a new look – including riders Alberto Contador and the controversial American Lance Armstrong, who was banned for life for doping in 2012 – Astana bounced back to take Tour de France titles in 2009 and 2010. But the victories were fleeting. Contador was later stripped of his 2010 title after failing a doping test. Astana produced the Tour winner again this year.

A common thread through this checkered history is the presence of Vinokourov, the poster boy of cycling in Kazakhstan. A native of the country’s north, Vinokourov rose to the very top of global cycling, winning Olympic gold in 2012. Though he then retired from active competition, he has remained a key figure in Team Astana’s management.

Following the team’s latest spate of failed drug tests, there has been increasing international pressure for Vinokourov to be investigated.

But in Kazakhstan Vinokourov remains untouchable. Despite his doping offense, he is one of the country’s ambassadors for Almaty’s 2022 Winter Olympics bid. Vinokourov is also facing charges in Belgium that he bribed a fellow rider, Russia’s Alexandr Kolobnev, to throw a race.

That colorful past is no problem in Kazakhstan, says Almaty-based analyst Aidos Sarym.

“Both officials and ordinary people like it when sportsmen from Kazakhstan bring victory, but few people consider how these victories are achieved,” Sarym told EurasiaNet.org. “Society doesn’t have the notion that doping is evil. For that reason, evidently, society doesn’t condemn Vinokourov or other sportsmen. People rather think up conspiracy theories and find a plot in this.”

Conspiracy theories are certainly rife in the Kazakhstani media. Sports.kz journalist Alexander Strelnikov wrote in November that “external enemies” are just jealous of Astana’s successes and trying to ruin the team.

“First the media again, after several years, starts dwelling on the subject of Alexandre Vinokourov’s possible commercial dealings with the Russian Kolobnev,” Strelnikov continued. “Then, when it becomes clear that this old story is not for some reason having the desired effect, suddenly one after the other people start latching onto the use of banned substances by Kazakhstani cyclists.”