While the plans under discussion only slightly loosen rules on rallies, penalties for breaking the rules are being made harsher. 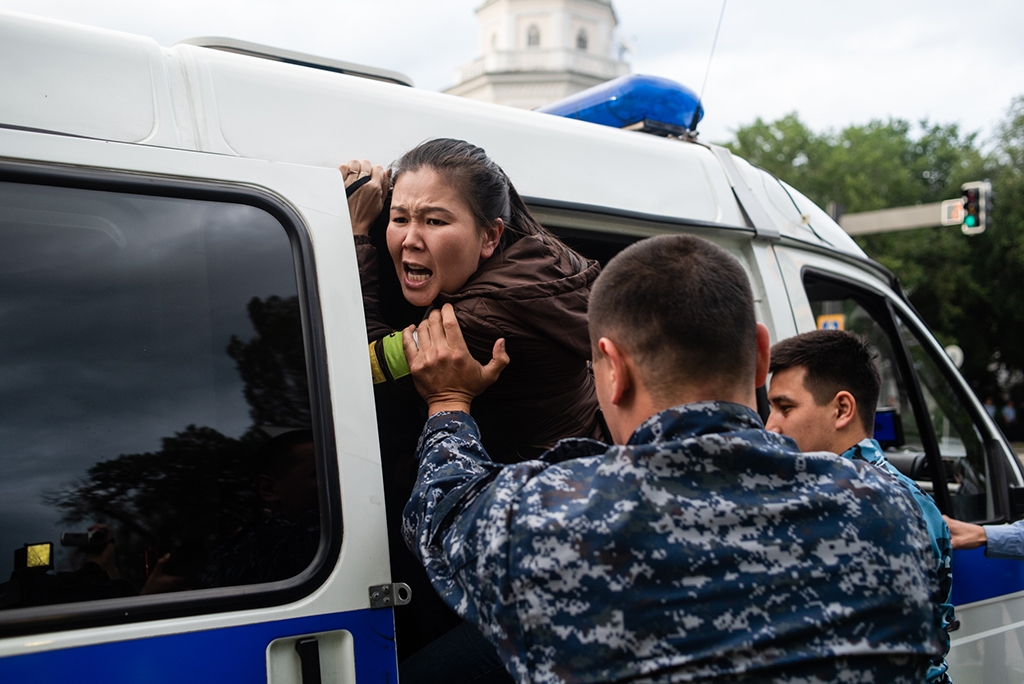 Last year, Almaty-based activist Gennady Krestyansky was twice prosecuted on charges of inciting people to and participating in an unauthorized public demonstration. He spent 30 days behind bars in total.

The first time was in February, when he posted a message on Facebook to advertise the date and location of a flash mob. A few hours later, he was pulled off the street by police and sentenced to 15 days in jail.

Another time, in September, he got the same penalty after his involvement in a demonstration against perceived Chinese economic expansionism.

This is the norm in Kazakhstan. Restrictive laws mean that calls for an impromptu rally, no matter how tiny, ensure jail time. Attending that rally will also end in jail time.

The authorities use this cudgel freely and regularly. On February 22, former journalist Zhanbolat Mamay urged supporters to gather in Almaty to protest the government’s measures to thwart his newly formed Democratic Party. That earned him a visit from the police, who stuck him behind bars for the weekend. Those who took up his call, including his wife, were dragged off the street.

Political activists contend this is all in breach of Kazakhstan’s constitution.

But when President Kassym-Jomart Tokayev – the handpicked successor to long-time strongman Nursultan Nazarbayev, who retired last year – was elected to office in June, the possibility of change appeared to be in the offing. Perceptions over the engineered and unaccountable manner in which Tokayev was slotted into place sparked protests, as did the decision to rename the capital, Nur-Sultan, after the retiring leader.

Although crackdowns did occur, Tokayev pledged to review legislation on public demonstrations, saying that it was necessary to transition away from the existing permit-based system.

Almost eight months later, draft legislation has been unveiled to the public.

The result has appalled activists. People like Krestyansky say the bill, if anything, envisions even more restrictions.

“The authorities are trying to introduce amendments that will tighten the screws even further,” he said. “For example, I cannot organize a peaceful meeting because I have already been prosecuted on charges of organizing a meeting.”

There could accordingly be many dozens, if not hundreds, of people similarly affected as a result of the government’s prosecution-happy track record.

Another proposal is to bar organizations not registered in Kazakhstan from summoning demonstrations.

That would include groups like Oyan, Qazaqstan, the largely youth-driven movement that emerged around the time of last year’s contentious presidential election.

Not surprisingly, members are unimpressed by the draft law.

“Oyan, Qazaqstan has never asked for permission to hold a rally. We have a constitution that guarantees the right to free expression,” said Assem Zhapisheva, a leading figure in the movement.

Alnur Ilyashev has some experience in the frustrating process of applying for permits to hold rallies. Last year, it took him 36 attempts before Almaty city hall formally granted approval to hold a public get-together.

Ilyashev is scornful of the fudge in the proposed legislation that would require rally organizers simply to signal their advance intent to hold a rally rather than to apply for formal permission.

“The draft bill talks about a supposed notification in the case of a peaceful protest of up to 250 people. But if the number of participants goes over 250, you need to get a permit, as was the case before,” he said.

The proposed legislation still includes language about how rallies can only take place in certain approved locations. This is a long-standing trick used by the authorities to minimize the visibility and impact of demonstrations. Approved venues are notoriously out-of-the-way. In Almaty, they include a small square behind a cinema beyond the downtown.

“I don’t know what Mahatma Gandhi [after whom the square is named] and the Sary-Arka cinema ever did to Almaty city hall to end up being associated with a reservation dedicated to dissidents,” Zhovtis grumbled at a February 17 press conference on the legislation.

Zhapisheva of Oyan, Qazaqstan said that the legislation is clearly intended to undermine the entire logic of rallies.

“[People attend demonstrations] because they want to be heard. It is international practice that people demonstrate in city centers, near government meetings,” she said.

The proposed new rules stipulate that if the number of rally participants exceeds the previously agreed threshold, the whole event should be brought to a stop. But who is going to be counting?

“Have the authorities ever tried doing headcounts at a meeting? What about all the police officers and the plainclothes policemen keeping an eye on proceedings?” Zhovtis wondered.

Togzhan Kozhaliyeva, a founder of a civic activist group called HAQ, says she posed this question to Information Minister Dauren Abayev, who was in Almaty on February 18 to discuss the proposed rules with activists and lawyers. It was Abayev’s ministry that drew up the legislation.

Abayev reportedly said that issue had not been worked out yet.

This all feels like a crushing disappointment to those people who took at face value Tokayev’s assurances, made in an interview to Euronews television after his election last year, he would serve as a reforming president. The lack of progress vindicates those people who suspect that although Nazarbayev has resigned as president, he is still pulling the strings.

“We know that citizen Nazarbayev is, in his capacity as Leader of the Nation and chairman of the national security council, looming over Tokayev. Key political decisions have to be coordinated with Nazarbayev and any talk of Tokayev as an independent figure is out of the question,” Ilyashev said.

Kozhaliyeva believes that the regime is, on the contrary, pushing back against reform.

“It is possible that the second president wishes to liberalize our laws, but the old regime is resisting,” she said. “And there is another possible explanation: that we are simply being presented with the mirage of novelty, but that this is actually all a show and the second president has no power at all.”

Political analyst Dimash Alzhanov, who is also a leading member of Oyan, Qazaqstan, believes the government is engaging in a sleight of hand.

“As the expectations of society have grown, the authorities’ have become fearful. Last year's protests taught citizens lessons about how to mobilize and self-organize. As the ability of protestors to self-organize evolves, we are seeing a response that will bring in strict new regulations for peaceful assemblies,” Alzhanov said.

Yelnur Alimova is a journalist based in Almaty.