Kazakhstan Draws Near to Dream of Hosting Nuclear Fuel Bank 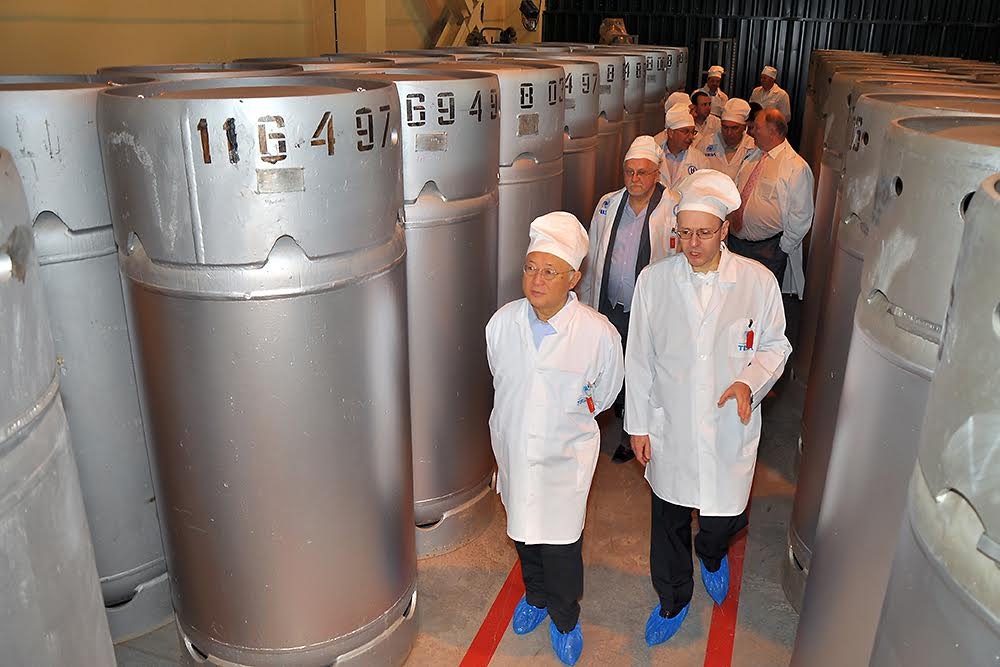 IAEA Director General Yukiya Amano inspects the reserve of LEU stored in Angarsk and made available by Russia for the future LEU bank in Kazakhstan. (Photo: ROSATOM)

Kazakhstan’s long-standing opposition to the proliferation of nuclear weapons is culminating with the signing of an agreement to build a nuclear fuel bank in the northern city of Oskemen.

Supporters of the initiative have hailed it as a possible solution to the type of diplomatic impasse that has pitted the international community against Iran, which is suspected by Western governments of pursuing a nuclear arms program.

The low-enriched uranium (LEU) storage facility, which is slated to begin operating in 2017, was officially launched on August 27 at a signing ceremony in Astana attended by officials from the International Atomic Energy Agency (IAEA) and the government of Kazakhstan.

“A lot of work must still be done, but after the signing of the relevant documents today, the legal framework is fully in place and we can move ahead with full-scale implementation,” IAEA director general Yukiya Amano said.

Astana hailed the agreement as a major achievement for the non-proliferation movement. “The signing of this agreement is a significant step that will facilitate peaceful nuclear cooperation, an objective which Kazakhstan has worked tirelessly towards. The LEU fuel bank is an important vehicle that will help create a safer world,” Kazakhstan’s Foreign Minister, Erlan Idrissov, said in a recent statement.

Although Kazakhstan has for many years been an ardent proponent of the fuel bank, the firmest impulse for its actual creation came from US investment magnate Warren Buffet and the Washington-based anti-proliferation organization Nuclear Threat Initiative (NTI), which put up $50 million in 2006 to get the project going.

Buffett, who is an advisor to NTI, said in a statement that he was eagerly awaiting the bank becoming operational. “Please tell the decision-makers that I am a patient and long-term investor, and that I know international agreements take time, but also tell them that I am 84 years old!” Buffett said.

NTI Co-Chairman Sam Nunn, whose name became a byword for the battle against nuclear proliferation during his 24-year career as a US senator, also attended the signing ceremony in Astana. NTI and Buffett’s multimillion-dollar commitment to the initiative was contingent on the IAEA sourcing another $100 million, which it did in 2009 by pooling contributions from Kazakhstan, the European Union, Kuwait, Norway, the United Arab Emirates and the United States.

The basic principle underlying the LEU bank is that buyers for civilian-use nuclear fuel will have access to stable and cost-effective supplies, avoiding the need for them to create their own enrichment cycle.

It is “another argument that can be deployed with countries like Iran building their first nuclear power plants, to tell them that they don’t need national enrichment plants,” said Frank von Hippel, a professor at the Princeton University’s Woodrow Wilson School of Public and International Affairs.

Under an internationally backed plan, LEU is to be provided to the Kazakhstan-based bank by countries including the United States, Russia, Germany, France, the United Kingdom and the Netherlands. Russia agreed in June to become a transit state for the transportation of LEU to and from the fuel bank.

LEU is defined as being a form enriched to around 20 percent of the uranium-235 isotope, as opposed to the 90 percent enriched variant of the isotope that is used for building nuclear bombs.

The IAEA said its LEU bank in Kazakhstan will be able to hold up to 90 tons of LEU, enough to run a 1,000-megawatt light-water reactor.

Kazakhstan’s enthusiasm for the fuel bank fits a general pattern in which Astana has sought to raise its international profile. In July, the bid of Kazakhstan’s commercial capital, Almaty, to host the 2022 Winter Olympics fell just short, losing a close vote to the Chinese city of Beijing. “Kazakhstan wants to show itself as one of the serious and active players in this [non-proliferation] sphere,” Almaty-based political analyst Dosym Satpayev told Nur.kz.

The fuel bank will be situated at Oskemen’s Ulba Metallurgical Plant, a location that has seen its share of environmental pollution. Authorities have periodically reassured people that the facility will pose no danger to the local population, however.

Safety standards at the bank will have to meet the requirements of the IAEA and follow regulations laid down by authorities in Kazakhstan. “The plant has been handling and storing nuclear material, including LEU, safely and securely for more than 60 years,” the IAEA said in its statement on the Astana agreement.

The main unanswered question is whether the project will actually succeed in its primary aim of preventing countries from pursuing their own full-enrichment cycles. “If a country feels that it needs a nuclear weapon option, they can ignore this option, as Iran has,” von Hippel said. “I am not arguing that Iran wants a nuclear weapon, just that it wants the option, like Brazil and Japan.”