Allegations of atrocities are coming to light that will dog Kazakhstan’s leadership for years. 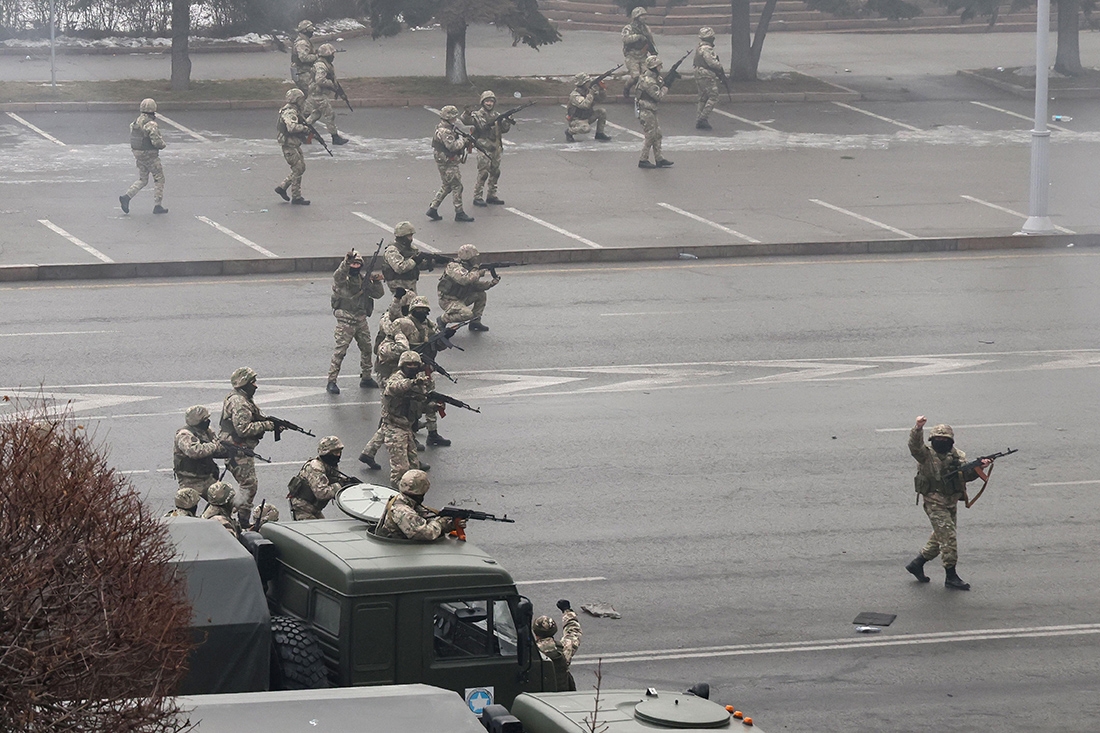 When Aidana Zhanadilova and her friends arrived at Republic Square on January 6, Almaty was enveloped in a meteorological and communications fog.

The day before, after a crowd of several thousand people overpowered security forces and broke into Almaty’s city hall, the government flicked the switch on the internet. What followed was a night of gunfights and looting.

But on the 6th, people wandered from the square into the charred presidential residence like shellshocked tourists. Empty bullet casings littered the grounds. Blood appeared in patches, thicker in the gutters running along Nazarbayev Street, where burned-out fire engines stood guard outside the damaged gates. Police had vanished.

President Kassym-Jomart Tokayev hadn’t yet publicly ordered troops to “shoot to kill without warning” as he sought to put a lid on a crisis that began with anger over gas prices in the west of the country.

With the internet blackout, few people had anything close to a full picture of just how bad the night had been, or how unsafe it still was to wander the city.

Zhanadilova and her group were greeted by a few dozen protesters, who thanked them for showing solidarity. The protesters said they had turned away some drunks who they thought might discredit their efforts. They rolled out their own long white banner: “We are ordinary people, not terrorists” – a rebuttal to Tokayev’s assertion that Kazakhstan was now at war with local and foreign extremist cells. 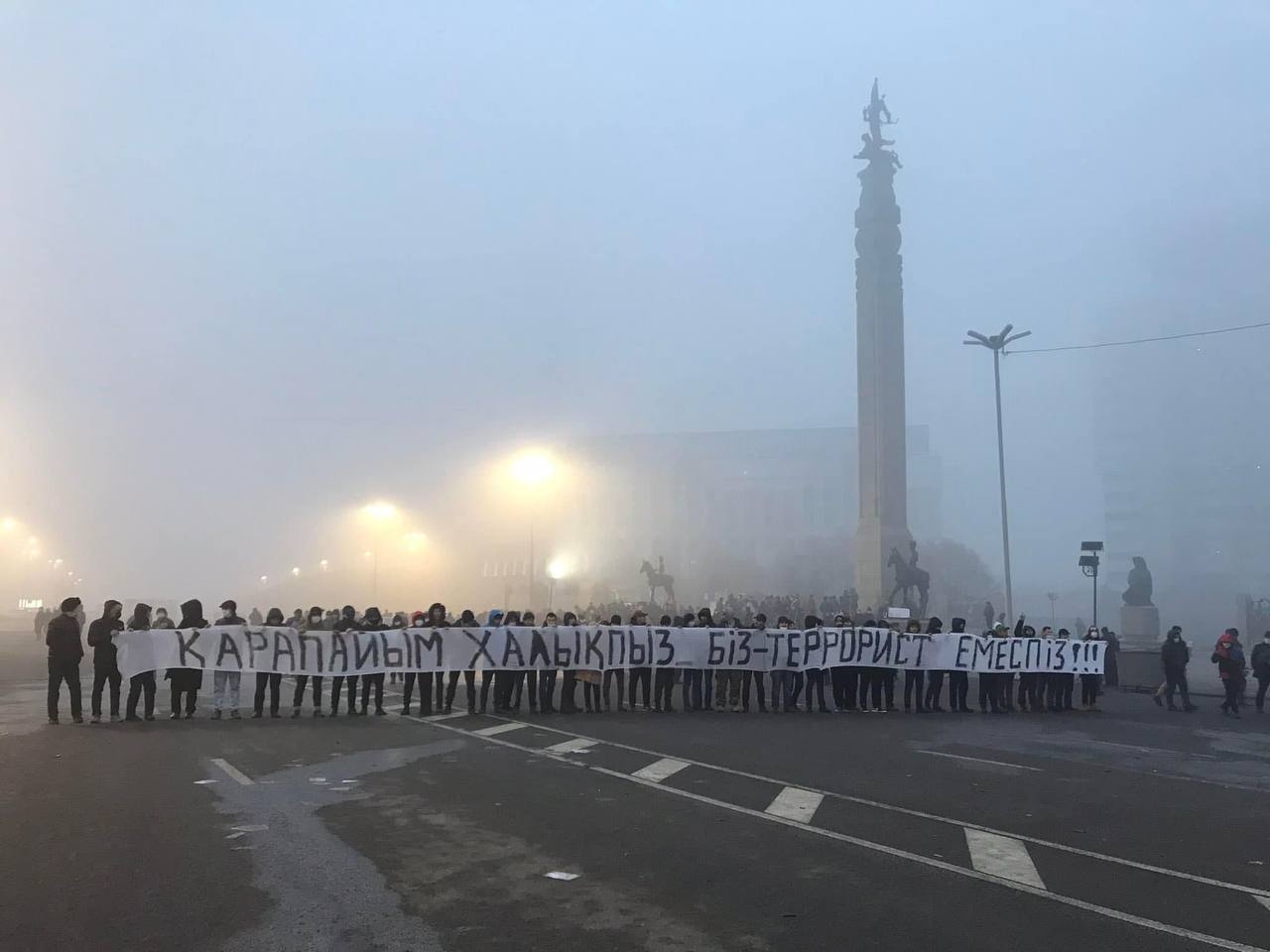 At around 6:30, when it was already dark, several older men from among the protesters approached Zhanadilova. They had a list of demands for the government and wondered if Zhanadilova or her friends had a printer. The list included demands for Tokayev’s resignation and fresh elections. Some of the protesters opposed the arriving Russian peacekeepers, whom Tokayev had hastily summoned.

Zhanadilova headed back to her flat and after about 20 minutes heard crackles of gunfire. She called an activist at the square who told her that “soldiers had started to fire at them,” she recalled.

No media witnessed the moment when soldiers opened fire, but a smartphone video taken at the edge of the square fits eyewitness descriptions; it shows people screaming as they take cover from a volley of gunfire and flash grenades.

Kamalzhan Kabarov, one of the older men, said that the shooting started after five military vehicles approached the protesters from two sides of the square.

“As we ran away, I saw a man fall flat on his face,” Kabarov told Eurasianet. “I think a bullet hit him in the elbow. I didn’t have time to look again.” Another eyewitness, Azhar, who preferred to use only her first name for security reasons, told Eurasianet that she saw a man take a bullet in the chest.

The white banner unfurled by protesters at the square on the evening of January 6 has since been invoked by those skeptical of the government narrative that security forces only fired at “terrorists” and “armed bandits.”

To date the government has confirmed 225 fatalities from the clashes; most are thought to have occurred in Almaty, nearly 2,000 kilometers from Zhanaozen, where the gas price-hike protests began. Authorities have not broken the figure down, except to give detailed accounts of the deaths of some of the 19 servicemen who perished.

Rights activists are filling that role by crowdsourcing data on the dead, detained and missing. Others have launched an online petition to demand the government reveal the names of the victims.

It is not clear how many died in the shooting on January 6. After hearing the gunfire, some Almaty residents ventured out on the streets. Some wanted to see if anybody needed medical attention, others were curious.

One man, whose name Eurasianet is not disclosing to protect his family, was in the first category.

Upon arriving at the square in the evening, he was shot in the chest and the neck. His relatives did not receive his body from the state morgue until January 13.

Archaeologist Yerlan Zhagiparov left his home near Republic Square at around 7:30 p.m. to learn what was happening. At 7:54, he phoned a friend to say that he had been arrested by staff of the National Guard. The friend heard cries of pain before the phone went dead, Zhagiparov’s brother Nurlan told Eurasianet. When his family finally found him at the morgue on January 12, Zhagiparov’s hands were still in handcuffs. His body had bullet wounds in the chest and stomach and bruising all over.

Nurlan Zhagiparov described his older brother, who was 49, as a vibrant and curious professional who played an important role saving petroglyphs in the Almaty region. Yerlan would delight his nephews by taking them on pretend safaris near the family dacha.

“When the unrest began, we told him to be careful. But we thought the danger was from bandits and looters, not from the National Guard,” Nurlan Zhagiparov told Eurasianet.

Correction: Due to a typo, this story initially said the official death toll stood at 255; it has been corrected to 225.