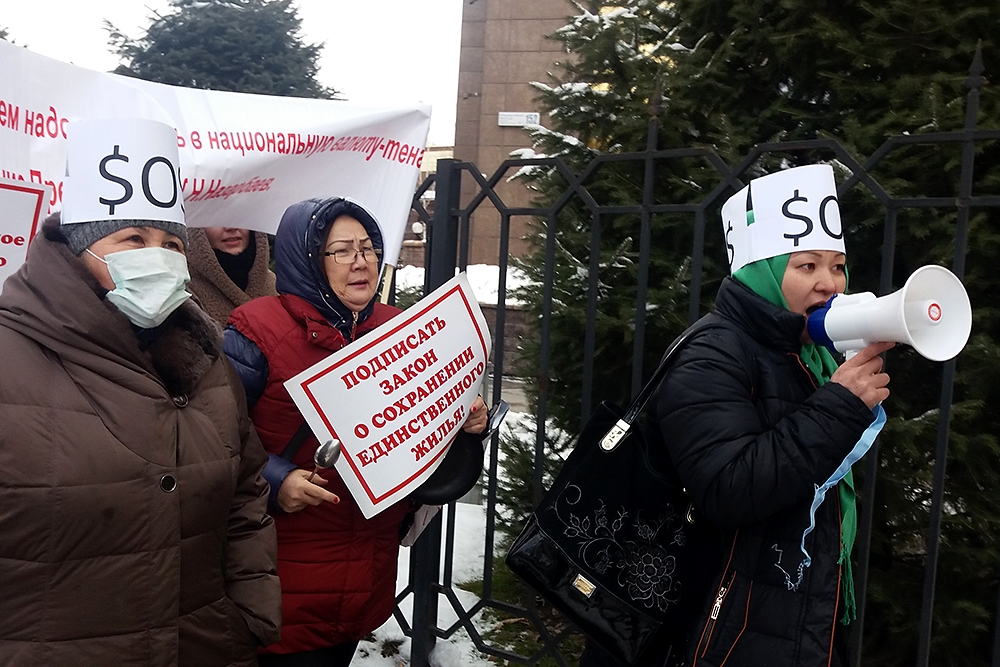 Sulubike Zhaksylykova, shouting into a megaphone, is the leader of a grassroots group called Let’s Provide Housing for the People. (Photo: Joanna Lillis)

Mortgage protests in Kazakhstan are becoming a familiar sight. In attention-grabbing demonstrations over the past couple of days, crowds have swarmed around banks in the commercial capital, Almaty, loudly banging pots and pans and blowing whistles.

“Down with banks!” chanted the two dozen people who took to the streets of Almaty on February 2.

This is increasingly the face of public unhappiness as the worsening economy chips away at now-fading aspirations for Kazakhstan to develop a sizeable, prosperous property-owning middle class. The central bank freely acknowledges the problem. Dreams fueled by easy access to loans have gone sour under the trifecta of a collapsing currency, spiking inflation and a decline in real incomes.

Many mortgage holders are unhappy at what they feel is the government's lack of help and the banks’ indifference to their plight.

Demonstrators in Almaty donned paper hats bearing the sign “$0$,” a tongue-in-cheek plea for assistance to extricate themselves from their suffocating debt.

The case of Alina, a 38-year-old who declined to give her surname, is typical. The mother of two, who works in a clothes shop, has fallen behind with her mortgage payments. Her salary of 60,000 tenge, which was previously worth $300, but is now equivalent to just $160 owing to the currency’s precipitous slide against the dollar, no longer covers the monthly payment.

“We paid for seven years without falling behind,” she told EurasiaNet.org. “We have three years left on the mortgage, but now they’ve gone to court to repossess our house.”

The message usually telegraphed by state media is that the authorities are doing the best they can with the bad hand they have been dealt. President Nursultan Nazarbayev, meanwhile, has suggested that those struggling should consider giving up luxuries, such as lemons, to help weather the hardship.

The pot-banging rallies — like the most recent one in Almaty that took place in a bank owned by Dinara and Timur Kulibayev, Nazarbayev’s billionaire daughter and son-in-law — are intended to push back against the government’s position. “We want to attract attention to our problem,” explained Sulubike Zhaksylykova, the straight-talking, hijab-wearing 41-year-old leader of a grassroots group called Let’s Provide Housing for the People.

Zhaksylykova’s group last month staged a demonstration in which debtors descended on a bank clad in gray cloaks chanting: “We are not a gray mass!”

Mortgage debt is a politically explosive element in Kazakhstan. Mortgage holders were the ringleaders of protests in Almaty following a currency devaluation in 2014.

And the problem looks only set to get worse, in the light of a recent forecast that Kazakhstan’s economy will shrink this year for the first time since 1998. With low oil prices pushing memories of Kazakhstan’s economic boom into the distance, notions that a prosperous, asset-holding segment of the population would emerge to form the bedrock of the Nazarbayev regime have proven illusory.

Instead, a sub-prime mortgage crisis of sorts is fast developing in Kazakhstan, where many are still struggling to retire their toxic debts from the 2007-2009 credit crunch. Mortgage holders who took out loans in hard currency (around 15 percent of the total nowadays) are in particularly dire straits, anxiously watching as their repayments double in tenge terms.

On January 1, legislation came into force banning banks from issuing foreign-currency loans to anyone who cannot prove a foreign-currency income, but that is of little use to those that already have them. A monthly repayment of $500 that cost 94,000 tenge in August now costs 188,500 tenge — well above the average salary of 158,000 tenge, which is now worth $420 at the current exchange rate.

The vast majority of mortgage holders (85 percent) hold their loans in tenge, but debtors are struggling with job losses and falling wages in tenge terms, as currency depreciation causes prices to rise.

Even if they can pay, the investment now looks hollow. Property values are falling and there are few buyers these days. “I bought [my apartment] for $110,000 and now it’s worth $60,000,” said Marina, a 50-something protester who has lost her job in a boutique. “Otherwise I’d sell and buy something cheaper.”

Defaults stood at 10 percent of Kazakhstan’s mortgage portfolio of 900 billion tenge ($2.4 billion) at the end of last year, according to central bank statistics – around double the default rate in the United States.

The credit bonanza was predicated in part on the widely held belief that the tenge was a copper-bottomed bet — an impression eagerly promoted by authorities, all the way up to Nazarbayev. “It’s easy with hindsight to criticize banks for issuing foreign currency loans, and borrowers for taking them,” said Alex Nice, Kazakhstan analyst at the London-based Economist Intelligence Unit think-tank, noting that the trend was common across emerging markets.

“It appeared to make sense for householders to borrow in foreign currency as the interest rate was often far lower,” Nice said. “People didn't think that by taking out such a loan when their income was in tenge they were essentially speculating on the exchange rate.”

The problem is hitting countries across the region, and so is the anger. The Russian capital, Moscow, has witnessed a spate of bank sit-ins as desperate debtors seek relief, while Kyrgyzstan’s government has announced a bailout to defuse a politically explosive issue.

Kazakhstan already has a bailout scheme in place, launched last year at a cost to the public purse of 130 billion tenge ($345 million). It offers generous refinancing terms: converting dollar loans to tenge and thus slashing repayments, and extending the life of mortgages to 20 years at rock-bottom interest rates of 3 percent, against the usual 15 percent.

“In general, in a credit squeeze the rapid restructuring of non-performing loans is desirable from the point of view of getting the economy back to growth,” Nice said. “In the case of Kazakhstan, it appears the cost will be borne by the state, and it should be affordable.”

As of mid-January, over 10,000 refinancing applications had been approved, subsidizing mortgage holders to the tune of 62 billion tenge ($165 million). The protesters are not satisfied, however, deeming the bailout too limited (it covers only mortgages issued between 2004 and 2009), and accusing banks of foot-dragging and a reluctance to devise realistic repayment plans.

The banks are in turn exasperated, accusing the protesters of harboring unrealistic expectations — like mortgage write-offs at the stroke of a pen.

The protesters say they will not be silenced.

In the February 2 protest, the pot-bangers started their demo at Kaspi Bank, then marched down Abay, a main Almaty thoroughfare, making lots of noise the whole way, creating a startling sight for passersby unaccustomed to witnessing public demonstrations.

The protesters descended noisily on the headquarters of Halyk Bank, the lender owned by the Kulibayevs, where they agreed to more talks with management on February 5 — while holding out the threat of further demonstrations if demands are not satisfied.

As Marina, the jobless protester stuck in negative equity, put it: “We’re afraid. That’s why we’re coming out to protest.”