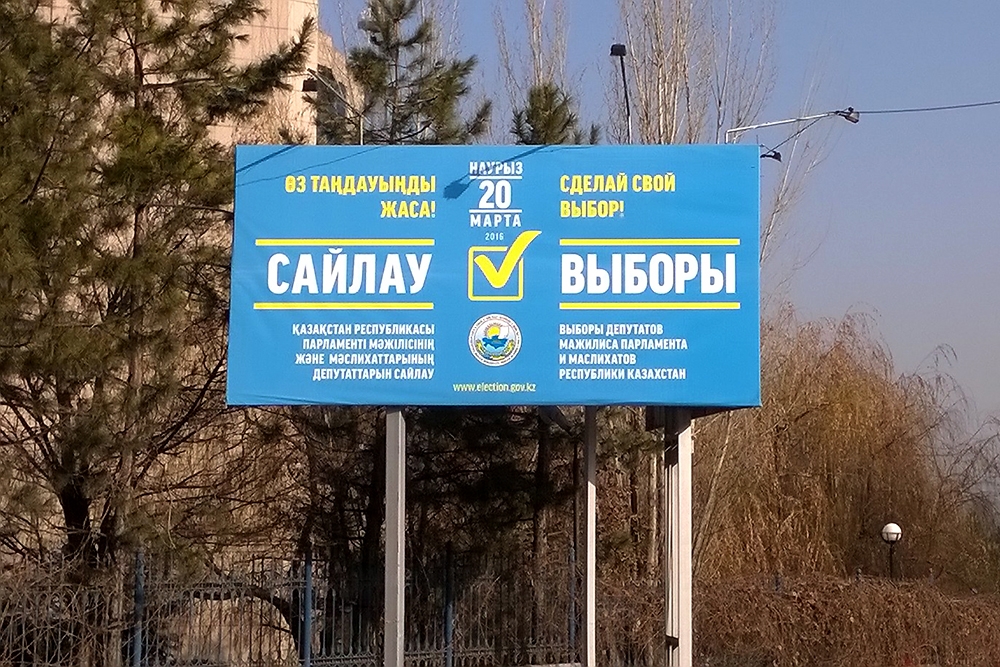 But not in Kazakhstan, where President Nursultan Nazarbayev’s Nur Otan party looks certain to secure another majority, as a barely visible parliamentary election campaign trudges past its halfway point. The election to select a fresh 107-member lower house of parliament — or Mazhilis — is set for March 20, almost a year earlier than required.

Pundits largely agree that the election, which was originally scheduled for January 2017, was brought forward in an attempt to limit the political risks for incumbent authorities, in case Kazakhstan’s economic crisis starts to bite even harder. “While the authorities have some degree of [public] confidence left, they have to preserve their legitimacy and get parties into parliament that will support the ruling powers,” Almaty-based analyst Tolganay Umbetaliyeva told EurasiaNet.org.

With opposition parties all but absent from the race, the vote is set to deliver a revamped version of the status quo, with Nur Otan holding a massive majority in a rubber stamp legislature that likely will contain token representation from other pro-government parties. “I don’t think anything will change,” said Umbetaliyeva. The new parliament “will be purely pro-presidential.”

To date, none of the five parties challenging Nur Otan, whose name partly echoes Nazarbayev’s first name but means Light Fatherland, has offered any serious criticism of the president, or his government. Criticism has been muted even though Astana is struggling with unpopular economic decisions.

Only one challenger has any credible claim to being an opposition party. The Social Democratic Party of Kazakhstan, known by the acronym OSDP, is fielding several well-known activists who have been critical of authorities. The party’s more outspoken candidates include Zauresh Battalova, Yermurat Bapi, Petr Svoik and Ualikhan Kaisarov.

The party is led by Zharmakhan Tuyakbay, a former Nazarbayev administration insider who went into opposition in 2004 and mounted an unsuccessful challenge for the presidency in 2005. Tuyakbay is doubtful his party will win seats, since, as he put it in a recent interview, authorities control the electoral process and “decide themselves who to make an MP.”

In the last election in 2012, the OSDP party won just 1.6 percent of the vote, well short of the 7 percent threshold needed to gain seats in parliament. Like every other election ever held in Kazakhstan, international observers judged that one to have been marred by irregularities.

The OSDP is billing itself as the only real opposition party in the poll, but since an acrimonious split in the ranks in 2013, when Tuyakbay ousted popular deputy leader Amirzhan Kosanov, critics have suggested it is no longer a credible opposition force.

The parties “are basically all pro-presidential,” Dosym Satpayev, director of the Kazakhstan Risks Assessment Group think-tank, told EurasiaNet.org. “I don’t count OSDP as an opposition party … because the main opposition players have been purged.”

Last year’s closure of the Communist Party was “another nail in the coffin” of the opposition in Kazakhstan, Satpayev added.

Other critical parties have been closed down in recent years, and one fledgling opposition force being set up by youth activists, the Justice Party, is far short of the 50,000 members required to apply for registration to stand in the election.

That leaves the political scene dominated by forces loyal to Nazarbayev — like Ak Zhol (Bright Path), which bills itself as a pro-business party. So close is Ak Zhol to the ruling elite that its leader, Azat Peruashev, was once a senior Nur Otan apparatchik until quitting to head his current party in 2011.

Ak Zhol is one of two parties standing in this election that held seats in the outgoing parliament, with eight deputies in the 107-member chamber. (The legislature before that one was a one-party Mazhilis, comprising only Nur Otan).

Another likely pro-government contender is Zhambyl Akhmetbekov’s Communist People’s Party of Kazakhstan (KNPK), which grabbed headlines during an otherwise moribund election campaign with an anti-western stunt, crushing Hollywood movies with a tractor to symbolize the party’s political stance.

The other two parties in the running are political minnows, formed recently through mergers of other pro-presidential forces: Birlik (Unity), led by Serik Sultangali, and the Auyl (Village) People’s Patriotic Party, headed by Ali Bektayev.

All parties have developed similar campaign platforms, a variation on the theme of fighting the economic crisis while upholding social welfare.

Ak Zhol is widely tipped to win seats, joined by a third party that pundits say could be either the government-loyal KNPK, which currently has seven members of parliament, or possibly a newcomer, if only to demonstrate that the vote has delivered change. Nur Otan has 83 deputies in the outgoing parliament. Another nine-member bloc is appointed by the Assembly of People of Kazakhstan in a mechanism designed to ensure at least minimal representation among the country’s main ethnic minorities.

Nur Otan’s only real competition is against its own previous performances, which offer some clues as to how this election could pan out. A legislature consisting of four or more parties is deemed unlikely, owing to the 7 percent electoral threshold. Such an outcome would push Nur Otan’s showing below 80 percent.

That would imply that support for the president’s party has eroded since its 81 percent landslide in 2012. Nazarbayev himself, who has led Kazakhstan for a quarter of a century, did far better in a snap presidential poll last year, garnering a stratospheric 98 percent of the vote.

Anxious to shed its old fogey image as the party of the establishment, Nur Otan is fielding celebrities and sports stars in the election, including champion boxer Gennady Golovkin, weightlifter Ilya Ilyin and pop singer Kairat Nurtas. Yet it is the association with the 75-year-old president, who enjoys genuine public popularity courtesy of regular praise in state media, that is expected to do the most to deliver Nur Otan a dominating share of parliamentary seats.

“I’m voting for Nur Otan, as the leading party and the party of the leader, Nursultan Nazarbayev,” Almas, 28, an Almaty voter who declined to give his surname, told EurasiaNet.org.

He was echoing a popular sentiment that also reflects the fact that Nur Otan is the only party with any significant public recognition factor.

“There is more lively competition for places in some cemeteries than there is in these parliamentary elections,” Satpayev joked.