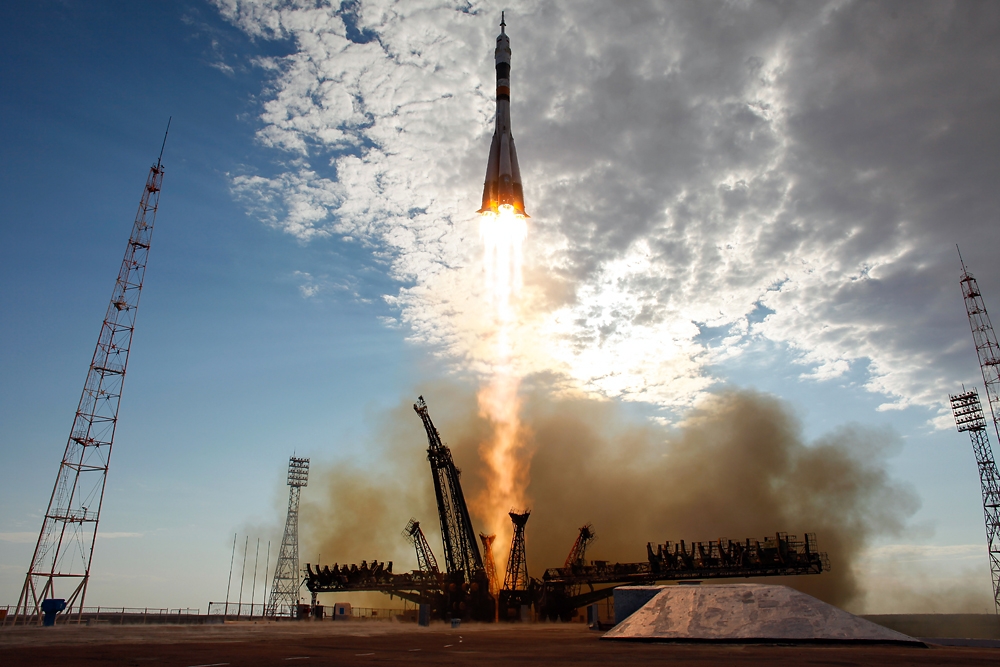 Kazakhstan has resolved one problem concerning the Baikonur Cosmodrome, but a fresh challenge for authorities is looming. A compromise between Astana and Moscow should allow for a resumption of normal space cooperation, but public opposition to Russian rocket launches is mounting due to environmental concerns.

The presidents of Russia and Kazakhstan, Vladimir Putin and Nursultan Nazarbayev, signed a roadmap agreement in late December, ending over a year of acrimonious negotiations covering the use of Baikonur. The dispute caused a slowdown in operations at Baikonur, the world’s largest spaceport. At one point, Kazakhstani officials threatened to eject Moscow from the complex, on which Russia’s space program is heavily dependent.

Kazakhstan’s space chief, Talgat Musabayev, hailed the roadmap as a “great step” -- and acknowledged that negotiations had been tough. “This step did not come easily to us, to be frank,” Musabayev told Russia’s Izvestiya newspaper on January 9.

He blamed the extended deadlock on the intransigence of top brass at Russia’s space agency, Roskosmos. Its management was reshuffled last fall, when Oleg Ostapenko replaced Vladimir Popovkin as director, paving the way for a breakthrough.

The roadmap grants Kazakhstan limited concessions over jurisdiction at Baikonur, which is leased by Russia for the annual sum of $115 million under an agreement running until 2050. A year ago, Musabayev threatened to tear up that deal unless Moscow made concessions. His remarks provoked an outcry in Russia, which relies on Baikonur to launch all its manned missions and most commercial satellites. (Moscow is building its own site in the Russian Far East, but the first launch is not due until 2015).

The low point in the dispute occurred last July, when a Russian Proton rocket crashed on takeoff in July, spilling toxic fuel and causing $89 million worth of damage, according to Astana’s estimates.

In a victory for Kazakhstan, the roadmap agreement revamps the Baiterek project – a rocket launch complex that Astana and Moscow agreed to build and maintain jointly back in 2004 at Baikonur, but which had stalled over disagreements. The framework agreement allows for the use of Ukrainian-built Zenit booster rockets, instead of the originally envisioned Russian-made Angara model. The switch will allow Kazakhstan to realize considerable savings since Baikonur already has an operational Zenit launch pad. In exchange, Kazakhstan will take over the Baiterek lease from Russia by 2015 – and assume annual maintenance costs of $10 million.

Russia and Kazakhstan also agreed to modernize the Zenit system with a view to it eventually replacing Russian Proton launches, which have created a furor in Kazakhstan over the environmental impact of the fuel it uses. Known as UDMH or heptyl, Proton fuel is highly toxic and can cause acid rain. Some experts also believe UDMH is a carcinogen linked to cancers in humans.

Modernization will not get under way until 2020, angering environmentalists in Kazakhstan. Last summer’s Proton mishap galvanized activists, sparking a campaign to boot Russia out of Baikonur. Protesters have managed to maintain a steady drumbeat of criticism since the summer.

In order to circumvent Kazakhstan’s draconian public protest laws, campaigners have taken to staging solo protests – but the tactic hasn’t prevented demonstrators from being prosecuted. On January 20, a student, Nurbol Khanabat, was fined around $180 for his one-man protest at the space agency in Astana.

Activists have also turned to satire to promote their cause: After Musabayev dismissed protesters as “sick,” campaigner Makhambet Abzhan turned up at the space agency dressed as an alien on January 27 in a mock attempt to kidnap the space chief and take him to Mars. Abzhan was arrested but released without charge.

A video posted online announcing that publicity stunt made it clear that for many campaigners the issue of national sovereignty is at least as important as environmental safety. “Don’t work for Russia!” threatened one man in an alien costume, his voice resonating with faux menace, before bursting into crazed laughter.

Kazakhstan has long chafed at Russian control over the town of Baikonur, which is designated under the lease as Russian territory. Under the roadmap Russia and Kazakhstan agreed to negotiate a special agreement to make Kazakhstan’s administrative legislation enforceable for Kazakhstani citizens in the town (Kazakhstani criminal law already applies to them). Other concessions gained by Astana include the right to bring more Kazakhstani government services to the town and apply Kazakhstan’s national curriculum in schools. Previously Kazakhstani children learned from Russian textbooks – which, Musabayev pointed out, teach that “our homeland is Russia and our capital is Moscow.”

Kazakhstan makes no secret of its plans to become a space power in its own right, and views cooperation with Russia as a means of acquiring technical knowhow. “Neither I nor a single sane person in Kazakhstan wants Russia to leave Baikonur,” Musabayev told Izvestiya, describing the relationship as one of “partners and allies.”

Yet Astana is increasingly unwilling to play the role of junior partner in the relationship. Officials are also eyeing the future, when Russia may no longer need Baikonur. “If Russia someday still wants to leave Baikonur we would not want the cosmodrome to die,” Musabayev added. “We will do everything possible for Baikonur to continue being a gateway to space; we will pursue the space program through our efforts. But I will emphasize: We would like Russia to stay at Baikonur forever.”