The shoo-in candidate didn’t show up. 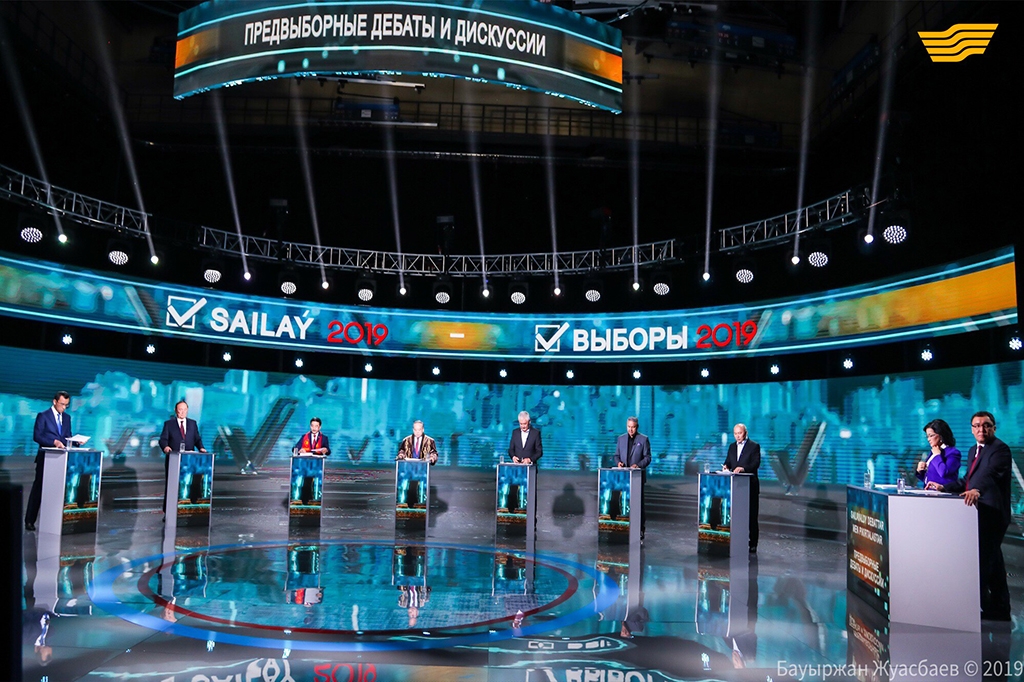 Kazakhstan’s pretend presidential election contest would not have been complete without a pretend debate among the pretend candidates.

And so, seven debaters went onto state television station Khabar on May 29 in a chronometrically choreographed process devoid of verbal sparring, policy ideas or any kind of disagreement.

Taxpayers footed the more than $100,000 bill for the pleasure of a spectacle that most people with day-jobs were unable to see.

The election is a purely pro-forma exercise, because it is evident that interim President Kassym-Jomart Tokayev, who was anointed by his predecessor, Nursultan Nazarbayev, will breeze through the June 9 vote. Tokayev is already treated by state media and foreign leaders as a permanent fixture.

In the full knowledge that exposure to even mild cross-questioning could only harm his chances, Tokayev kept away from the debate, sending campaign chief Maulen Ashimbayev in his stead. The president was instead across town in Nur-Sultan attending a meeting of the Eurasian Economic Council.

Another two candidates, Daniya Yespayeva from the pro-government party Ak Zhol and Toleutai Rakhimbekov from the rural issues-focused Auyl political party, likewise did not make a showing, leaving surrogates to do the job.

Those who tuned in were unimpressed.

“This is disrespectful to the voters. Are voters casting their ballot for the candidates or their representatives?” economist Meruert Makhmutova asked on her Facebook page.

Just to ram home the pointlessness of the whole electoral process, at least a couple of the candidates have seemingly been allowed to stand just for some light relief.

Zhambyl Akhmetbekov, who was put forward by the Communist People's Party of Kazakhstan – an astroturf leftist formation originally approved by the government to displace a more popular, now-disbanded communist party – set out his platform in stereotypically eat-the-rich manner.

“Today, the rules are dictated by oligarchs, transnational corporations, extortionate percentages and speculating middlemen,” he said, wearing a red party scarf. He read his remarks from prepared notes, as did all the other candidates.

Akhmetbekov is not meant to be taken seriously. When he ran for parliament in 2012, his party produced a low-budget campaign clip comprised entirely of him soberly performing a series of kung fu moves. As he made his points in Wednesday’s debate, fellow panelists could be seen smirking broadly.

Another joke candidate is Sadybek Tughel, who belongs to a movement called the Eagles of the Great Steppe. For the duration of the debate, Tughel wore a tradition Kazakh kaftan and wielded a horsewhip. His most eye-catching proposal of the evening was to close all nightclubs and saunas in Kazakhstan.

“These are places of the devil,” he said. “It all pushes our youths onto the path of degeneracy and miseducates them. For this reason, we should fight against this and close all these places of the shaitan [satan] – nightclubs, saunas, casino-masinos.”

The format of the debate was tailor-made to avoid incisive analysis of specific ideas or policies, such as they were.

The 80-minute show initially allowed for each debater to read a statement. Candidates were then allowed 20 seconds to pose questions. Answers to queries had to be given within a minute and a half. The seconds were prominently displayed under the participants. As the time limit approached, a loud, quiz show-style tick-tock sound increased in volume. Anybody going over their allocated time was brusquely halted.

Most of the questions were, in any case, softballs designed to make the interim president look good.

Amangeldy Taspikhov, a former functionary with the ruling Nur Otan party who was nominated to run by the Federation of Trade Unions of Kazakhstan, asked the president’s stand-in how his boss intended to improve the lot of people in the regions.

Ashimbayev said his candidate would provide communities with quality drinking water, repair roads and develop the healthcare sector. If they had wanted to, nobody would have been able to pose a follow-up question about why Tokayev’s predecessor and champion had underperformed so dismally in achieving these goals over his three decades in charge.

The surrogate for Yespayeva asked a similarly bland question of Ashimbayev, about small and medium enterprise, and got a canned answer in response.

Tolganai Umbetaliyeva, the head of the Central Asian Foundation for the Development of Democracy, a think tank, dismissed the debate as a “boring” spectacle.

“It is a pity that all the candidates read out their answers and did not argue or criticize each other. Everybody was very proper and on their best behavior. There was no emotion,” Umbetaliyeva said in remarks to independent news website Holanews.kz.

Some minuscule level of intrigue has been added to the election by the government’s decision to allow opposition politician Amirzhan Kosanov to take part.

Anybody who expected pyrotechnics from the 55-year-old was, however, to be disappointed. He recited familiar complaints about the need to uproot corruption and implement reforms, but his general demeanor in the debate was less indignant truth-teller and more disappointed schoolteacher.

And still, debate organizers contrived to prevent any awkwardness by not giving Kosanov a chance to pose a question to Tokayev’s seat-warmer.

There are some hardline opponents of the government who are scornful of the fact that Kosanov is taking part in the election at all as they believe he is merely lending legitimacy to an exercise of questionable democratic value.

This is all moot anyhow, since many TV viewers were unable to see the full debate at all. The program was aired at 6 p.m. local time, just as most of those with jobs are leaving their place of work.

For a brief interlude, Khabar made the debate available for viewing on its YouTube channel. But as of the evening of May 30, that footage had been pulled for reasons unknown.

This makes it all the more remarkable that state television earmarked 41 million tenge ($109,000) for election debates and discussion shows.

Speaking earlier this week, Rinat Kertayev, deputy chairman of the Khabar news agency, which controls the TV station that aired the debate, argued that the money was being well spent.

“We plan to create large-scale decorations using LED screens for these debates and discussions. We want to use modern lighting equipment so that the audience at home can watch high-quality, interesting content,” Kertayev told Russian news agency Sputnik.

“They should pay back the money spent on this nonsense,” he wrote.