Detractors worry whether the fancy new center will find enough clients to justify its creation. 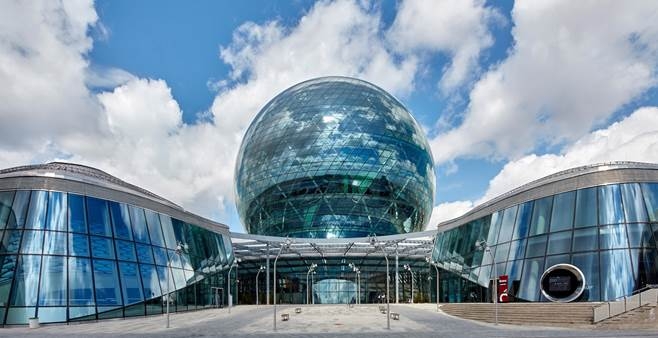 An image of how the Astana International Financial Center will appear when completed. (Photo: European Bank for Reconstruction and Development)

With a showman’s flourish, Kazakhstan’s President Nursultan Nazarbayev on July 5 opened a financial services center in Astana that is intended to assert the nation’s claim to becoming a modern player in the global economy.

Nazarbayev said as he stood in a maelstrom of glittery ticker tape and after banging a gong — perhaps a nod to the famous bell of the New York Stock Exchange — that the Astana International Financial Center was an “important step for the consistent sustainable development of our economy.”

The creation of the AIFC is an attempt by Kazakhstan’s leadership to nudge the nation away from excess reliance on raw commodities like oil and gas. The whole initiative remains very much a work in progress though, in every respect.

The gala opening was held in a congress hall on the site where Astana last year hosted the international EXPO exhibition as the AIFC’s offices are not yet ready. Behind barriers covered in posters celebrating Astana, construction work is still continuing on the two curved glass-fronted buildings earmarked for the future headquarters. The buildings are former pavilions used for EXPO, which Nazarbayev mandated be converted into the AIFC so as to avoid charges of having created a costly white elephant.

Critics pointed out at the time that Kazakhstan already had a financial center, in the commercial capital of Almaty. Opening a new one in Astana risks turning Almaty into something of a third wheel.

Nazarbayev has said that the two centers will complement not rival each other. But remarks made by AIFC director Kairat Kelimbetov ahead of the opening suggest that in reality the Almaty Regional Financial Center is now as good as dead in the water.

“It didn’t work out,” he told Forbes magazine, speaking about the Almaty center, adding that it had “retrograde infrastructure.”

The AIFC is a far more ambitious project. It is being positioned as a hub for global finance along the lines of analogues in Dubai and Shanghai.

“I think we can compete,” Kelimbetov told Eurasianet on the sidelines of the opening. “We know what a financial center of the new generation should look like.”

The AIFC uses English as its official language and will be based on English common law. It will have a court and international arbitration center on site to resolve disputes that will be presided over by Lord Woolf, a former Lord Chief Justice of England and Wales.

The legal framework is in place then, if not all the infrastructure. The true test will be how the fledgling financial hub actually performs, especially when it starts later this year to list large state-owned companies on its stock exchange, which is part owned by the Shanghai Stock Exchange.

The European Bank for Reconstruction and Development, which is a partner in the center, certainly seems sold.

“I am sure that the development of the AIFC will help create a competitive, efficient and transparent financial market in Kazakhstan, Central Asia and the wider region,” Natasha Khanjenkova, a senior representative of the EBRD in Kazakhstan, said in a press release.

The government is offering tax breaks and other perks to lure firms to Astana. So far, it has only managed to lure 50 companies. Detractors fear that in the end the AIFC may end up another vanity project in a city that is already full of them. Tellingly, the inauguration was timed to coincide with an important date for Astana, which marks its 20th anniversary as the capital of Kazakhstan on July 6. That date also happens to be Nazarbayev’s birthday.