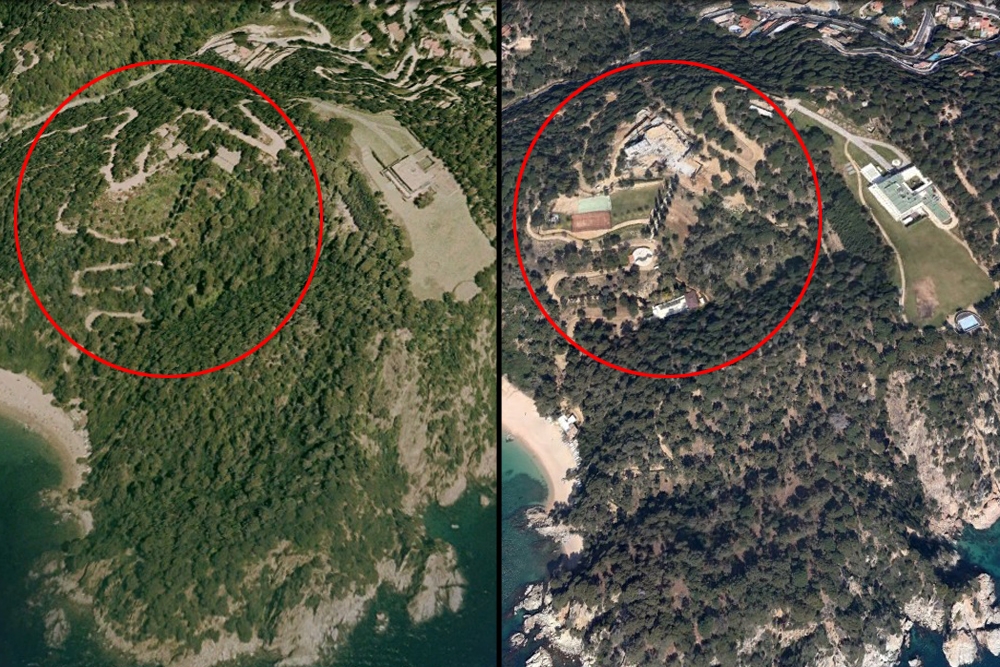 Development of the Can Juncadella property from 2004 to late 2012. (Satellite images from Institut Cartografic de Catalunya)

A mysterious mansion on the Catalan coast with an apparent Kazakhstani connection is spurring an environmental controversy. Local authorities are conducting a probe to determine whether graft was involved in the granting of permits to build the estate in an ecologically protected area. The villa in question is still under construction, and, when completed, shapes up to be one of the more opulent pleasure domes on Spain’s Mediterranean coast. Known as Can Juncadella, it will have a whopping 3,000 square meters of space, reportedly including 13 bedrooms, 25 bathrooms, three saunas and a vast garage for luxury cars. It is situated in Lloret de Mar, a town with one of the finest beaches on the Costa Brava, roughly 35 miles northeast of Barcelona. While the basic outlines of the villa are now plainly visible, important details, namely who owns it and how he/she obtained the waivers to build it, remain unknown, as if hidden inside a nesting doll of opacity. According to Spanish news reports, the owner is a citizen of Kazakhstan. An article published in the leading Spanish daily El Pais, for example, described Can Juncadella as being owned by “a Kazakhstani tycoon.” Meanwhile, a report published in a Catalonian newspaper, Diari de Girona, linked the property to “a powerful family from the highest political circles of Kazakhstan.” Perhaps most tantalizingly, a court document filed in Blanes, a town near Lloret, associates Can Juncadella with “the president and chief of state of Kazakhstan.” When queried by EurasiaNet.org, a Kazakhstani Foreign Ministry official, Nurzhan Aitmakhanov, responded in an email that the property was privately owned, and “doesn’t have any connection to an official representative of the Republic of Kazakhstan.” Determining who owns Can Juncadella is one of the aims of a complaint filed in late 2012 by a local environmental group called SOS Lloret. The group seeks to hold the owners culpable for what activists assert is illegal behavior. The complaint contends that Can Juncadella is located in an environmentally protected zone that was established in 2000; as such, the villa’s construction should be considered illegal, and all work on the property should be halted. Rampant and loosely regulated development along Spain’s Mediterranean coast has stripped the area of woodlands and other environmentally sensitive areas. In some regions, it also has placed great stress on relatively scarce water resources. SOS Lloret and other local groups are fighting to save the few patches of coastline that still retain their natural features, as well as promote sustainable development. The coast “has suffered from over-development in the past 50 years,” an SOS Lloret representative wrote in an email response to questions posed by EurasiaNet.org. The activist, who wrote from an email account belonging to SOS Lloret, requested anonymity. “Protecting what is left of more or less intact coastal landscape should be of paramount importance for the touristic village [Lloret],” the activist continued. “In this context, of course, the construction of a huge mansion is causing significant damage.” It’s been over a year since SOS Lloret representatives filed their complaint, but no stop-work order has been issued, and construction on the estate continues. However, authorities are investigating whether possible criminal activity occurred in connection with the acquisition of building permits by a company involved in the project, identified as Flinder Data SL, a limited liability entity registered in the Catalonian city of Girona that, according to a report published by the Catalonian-language El Punt Avui daily, was “formed by businessmen from Kazakhstan.” According to the SOS Lloret complaint, local planning officials approved Can Juncadella’s building plans back in 2010 despite the existence of three reports prepared by governmental agencies that advised against construction due to environmental factors. Several former local officials involved in the decision-making process have come under judicial scrutiny. Investigators are trying to determine whether bribery paved the way for Can Juncadella’s construction. While SOS Lloret hasn’t been able to uncover hard evidence of graft, the group’s representative stressed to EurasiaNet.org that “corruption is a huge problem in Spain.” “We’ll have to wait for the results” of the judicial investigation, the activist added. When that might be is not certain. “At this stage it is probably hard to know: something between months and years,” the activist said.

From Samarkand to Seoul: Central Asian migrants in South Korea

With capitalist ambition, a KGB museum opens in New York