The “People’s IPO” program was conceived over a decade ago to create a class of retail investors in Kazakhstan. 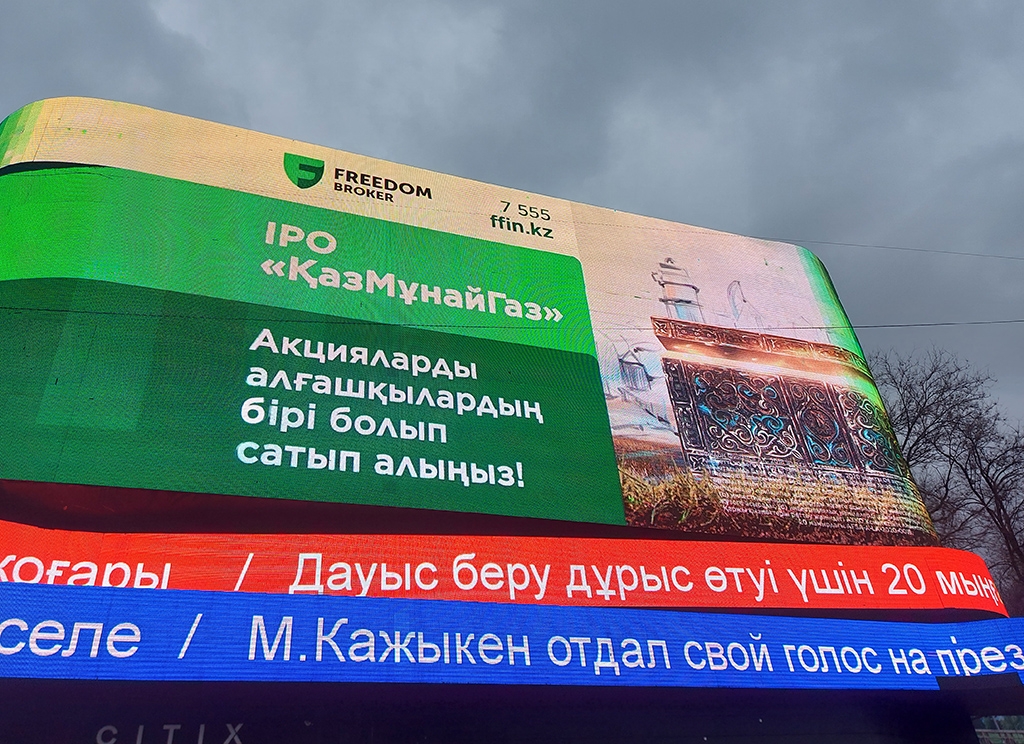 Electronic billboard advertising the IPO to the public in downtown Almaty. (Joanna Lillis)

Kazakhstan’s state-owned oil and gas company is ending the year with a $330 million cash infusion after finally making its stock exchange debut, over a decade after plans to go public were announced.

The flotation of KazMunaiGaz (KMG) shares on the stock markets in Astana and Almaty breathes new life into a privatization drive that has been beset by delays.

KMG’s initial public offering (IPO) was the largest ever on Kazakhstan’s stock market in terms of the number of bids received and final sales volume.

However, the results indicate that investor appetite for buying into major Kazakh companies may not be as high as Astana would wish, since the IPO was undersubscribed.

KMG offered 5 percent of shares, but investors snapped up only 3 percent.

Still, KMG raised some $330 million from the sale of 18.3 million shares, Samruk-Kazyna, the sovereign wealth fund that controls state assets, said in a statement. Before the IPO the fund owned 90.4 percent of KMG’s shares, while Kazakhstan’s central bank owned 9.6 percent.

This marks the relaunch of what the government bills as its People’s IPO program, conceived to create a class of retail investors in Kazakhstan.

KMG is only the third company to complete an IPO since that scheme was announced in 2011. The two others are oil transportation company KazTransOil and power company KEGOC.

Multiple factors have caused delays, ranging from the pandemic and various domestic and international economic crises to resistance by vested interests leery of the scrutiny public ownership brings.

President Kassym-Jomart Tokayev called for the revival of the People’s IPO last year, as a chance for all citizens to “have the opportunity to share in the national wealth.”

This chimes with his promises of more equitable wealth distribution as he seeks to curb the crony capitalism that pervaded Kazakhstan under his predecessor Nursultan Nazarbayev.

That led to the concentration of most of the wealth in the hands of the few. The KPMG consultancy calculated in 2019 that 162 people, just 0.0001 percent of the population, owned 55 percent of Kazakhstan’s vast wealth.

The People’s IPO program will make companies more accountable and transparent and is a step toward building “an open and efficient economy in the interests of the people of Kazakhstan,” Prime Minister Alikhan Smailov suggested, as he launched trading in KMG shares on the stock exchange in Astana on December 8.

With this in mind, Samruk-Kazyna refused some bids for KMG shares in order to prevent “the concentration of large blocks of shares in individual large investors.” It did not name them.

It gave priority to bids from Kazakhstan, which in any case accounted for the majority.

Foreign individuals and companies received 4.3 percent of the shares, while 48.5 percent went to private citizens of Kazakhstan and 47.2 percent to Kazakh companies.

The IPO “demonstrated the high potential of Kazakhstan's securities market, as well as a significant increase in investment literacy and activity among citizens of Kazakhstan,” Almassadam Satkaliyev, the chairman of Samruk-Kazyna’s management board, enthused.

Other companies now preparing to place IPOs include Air Astana (whose plans to list this year have slipped); Kazakhstan Temir Zholy (KTZ), the railway operator; KazPost, the post office; and Samruk Energy, a power generation firm.

Neighboring Uzbekistan has also managed to get its IPO program off the ground just before the year ends. Ambitious plans for 15 large companies to float by 2023 have been pushed back, but the UzAuto Motors automobile manufacturer launched its IPO on December 1. Bids close on December 22.