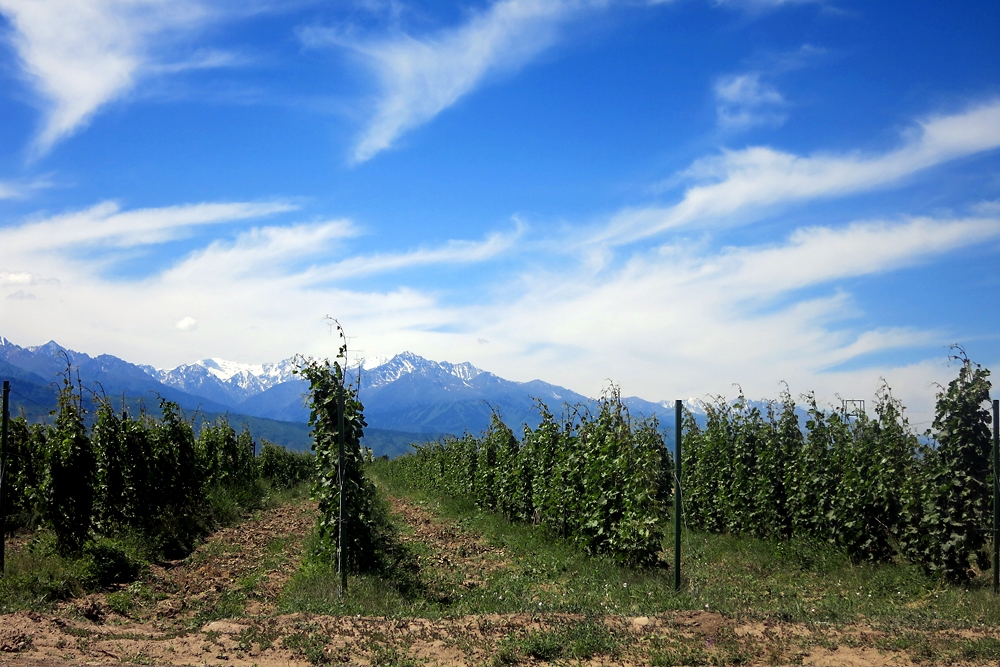 The snow-capped Tian Shan mountains rise on the horizon behind the vineyards belonging to Arba Wines. (Photo: Joanna Lillis)

When Zeinulla Kakimzhanov took over a dilapidated vineyard in the foothills of the Tian Shan Mountains in south-eastern Kazakhstan in 2006, he had ample reason to wonder whether the property would ever be productive again.

Abandoned vines lay forlornly on the soil, the victims of neglect and wanton destruction. The vineyard had been a casualty of a Communist Party-conceived, anti-alcohol crusade in the mid-1980s; in an effort to curb consumption, state planners ordered the destruction of wineries across the Soviet Union. Kazakhstan lost about 70 percent of its vineyards.

Eight years after Kakimzhanov’s arrival, however, the vineyard is thriving, as emerald vines seem to disappear into the purple haze of the mountains. It’s a scene straight out of Tuscany – apart from the snow crowning the peaks in the shimmering heat of a Central Asian summer.

The idea of brash, petrodollar-fuelled Kazakhstan bottling vintages to tickle the connoisseur’s palate may raise eyebrows among Western wine aficionados – but Kakimzhanov, a former government minister turned viniculturalist, is confident he can help put his country on a wine lover’s map.

The founder of Arba Wine, which owns the vineyard in the Assa Valley east of Kazakhstan’s commercial capital Almaty along the highway to China, waxes lyrical about the “exceptional” wine-growing conditions: a continental climate; rich soil; a similar latitude to France’s Rhone Valley, but at a higher altitude.

Even Kazakhstan’s freezing winters are a boon: the cold kills off disease, noted Kakimzhanov, who has infectious confidence and boundless energy. He sometimes travels to the vineyard by cycling from Almaty, some 80 kilometers away. There is a trick to tending the vines through the tough winters: “We bury them.”

Advised by Italian consultants, the vineyard has planted grapes including Chardonnay, Gewurztraminer, Riesling, Merlot, and Malbec. They are thriving – but it has been a long, hard slog. It took seven years to produce the first bottling for commercial sale last year, and it will be many more yet before the vineyard breaks even – let alone makes a profit.

Kazakhstan may not be a famous wine hotspot, but viniculture has a long history here: an amphora containing wine traces has even been unearthed from an ancient Scythian burial mound situated on Arba Wine’s property. These days most drinkers in Kazakhstan prefer beer or vodka: only 3 percent of alcohol consumed in the country is wine, according to World Health Organization data.

Yet wine drinking is gaining ground among the country’s aspirational middle classes – and the president himself, Nursultan Nazarbayev, is reputed to appreciate fine reds. “Wine is considered a luxury, but slowly this habit is changing,” said Timur Tulebayev, a wine lover who led a recent wine-tasting evening at a fashionable Almaty restaurant. “You can see more middle class people starting to explore wine.”

Locally-made vintages are a tough sell, however. “People don’t trust local wines and like to drink imported wines,” Kakimzhanov laments – not surprisingly, since many wineries in Kazakhstan produce a chemical-rich brew made from concentrates, not grapes.

While some of the young professionals at the wine-tasting evening turned their noses up at the idea of sipping local wine, others embraced it. “It’s good with meat,” said economist Galiya Akilzhan – appropriately for a country whose signature dish is horsemeat piled on a noodle base.

People are “shocked” when they taste Arba’s wines made in the former Kirov collective farm in the village of Karakemer, which is now a state-of-the-art winery, said Kakimzhanov. “Nobody can believe it is local wine.”

Marketing the wine – which sells for $14-$30 per bottle in the company’s smart retail outlet in downtown Almaty – is tricky in a country where alcohol advertising is banned. The company currently relies on social networks to gain brand recognition.

When the new owners took over the old collective farm, they were amazed to find some abandoned vines still alive. They replanted them, and the hardy plants are flourishing anew with grapes imported in Soviet times from Georgia such as Saperavi and Rkatsiteli.

This story encapsulates the fledgling recovery of Kazakhstan’s wine industry: it now employs 15,000 people, Artush Karapetyan, president of the Union of Viniculturalists, told Forbes Kazakhstan magazine in April. Vineyard plantations have crept back up to about 15,000 hectares. Before the anti-alcohol campaign during the late Soviet era, Kazakhstan had about 27,000 hectares of vineyards.

After winning over the local market, Kakimzhanov wants to see if he can “build a new brand, a Kazakh brand, which can be recognized at the world level.”

Tulebayev, the wine aficionado, added that one day he hopes to go abroad and “hear someone say ‘I tried that Kazakhstani wine and it was really good’ … I’ll be proud.”