Kazakhstan: Fledgling Auto Industry Wants to Give Russia a Run for Its Money 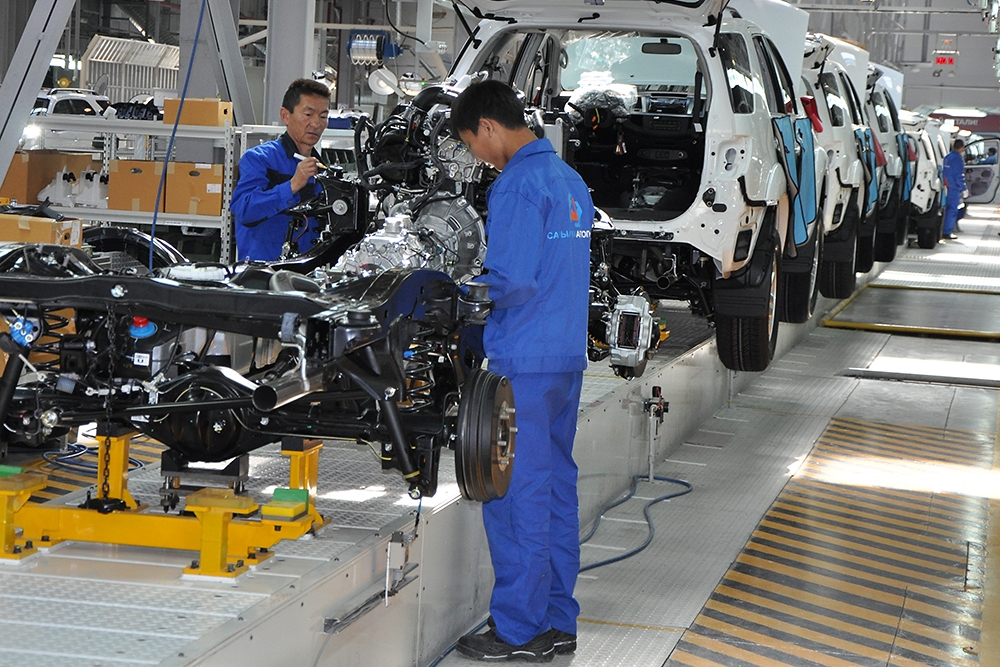 Is Kostanay on its way to becoming Central Asia's Detroit? (Photo: AllurAuto)

Kazakhstan has long sought to diversify its economy to make it less dependent on energy exports, a mission that has taken on increasing importance in this age of low oil prices. A state-of-the-art automobile production line situated on the steppes of northern Kazakhstan represents a potentially important step in this direction.

On the factory floor, sparks fly as workers weld doors to the chassis of an off-roader. “What we are building here is the SsangYong Nomad,” says Igor Zhuzha, head of the welding workshop at the AgromashHolding factory outside the city of Kostanay, a center of Kazakhstan’s fledgling automobile manufacturing industry.

This vehicle is aptly named for a country of former nomads where the jeep has replaced the horse as a favored mode of transport. Autos in general are “like a drug,” joked Andrey Lavrentyev, president of automobile dealer and manufacturer AllurAuto, whose cars are produced at this plant. “You get into it [a car] once, then you do not want to get out of the car again.”

Kazakhstanis certainly seem hooked: car sales boomed by 1,864 percent over the last decade, according to figures from the Association of the Kazakhstani Automobile Business: from 8,328 sold in 2004 to 163,561 last year.

But since last fall, sales have plummeted, dropping by 20 percent in November, 18 percent in December, and 28 percent in January (in year-on-year terms). This year will be “very painful,” Lavrentyev told EurasiaNet.org in an interview in one of AllurAuto’s plush car showrooms in Almaty.

Last year, the industry posted its first drop in sales in five years, of 1.3 percent. So are Kazakhstanis taking their feet off the gas?

In fact, they are still buying plenty of cars – but competition from Russia, Kazakhstan’s partner in the Eurasian Economic Union (EEU), is putting the brakes on domestic auto sales. The reason for “the crisis on the automobile market” is the “shock devaluation of the ruble,” Lavrentyev said.

Consumers have been flocking from Kazakhstan to Russia to buy cars, because the ruble’s nosedive means they get more bang for their buck.

Almaty resident Marat Jarzhanov saved $13,000 by traveling 4,000 kilometers to Moscow to buy a Nissan Qashqai in January – even after paying his airfare and shipping costs to Kazakhstan.

“I decided to go to Russia [because of] the price difference,” he told EurasiaNet.org. “Thanks to [the EEU] I did not need to make customs clearance, so it was a winning idea.”

In October, November, and December, 36,527 vehicles were brought into Kazakhstan from Russia – almost equivalent to the 38,380 cars sold inside the country in that period. The share of Kazakhstani-made vehicles in sales tumbled from 20 percent last October to 12 percent in January.

Manufacturing output also dipped last year, by 1 percent, to 37,157 cars – although AllurAuto’s output rocketed, by 29 percent. It produced 8,354 cars last year, partnering with international brands like Peugeot, Toyota, and SsangYong. It is a small, but impressive number for a firm that only branched out from selling to manufacturing in 2010.

“In just four years, every fifth car produced in the country is ours,” said Lavrentyev, who owns 30 percent of AllurAuto. Oligarch Yuriy Tskhay owns the remainder. “We control 23 percent of the country’s automobile output.”

Rival AZIA AVTO, which manufactures vehicles in Oskemen (Ust-Kamenogorsk) in eastern Kazakhstan, accounts for the rest, but Lavrentyev hopes to become market leader by 2020.

The ambitious plans of this go-getting, self-made entrepreneur are music to the ears of the administration of President Nursultan Nazarbayev: it views manufacturing as the linchpin of Astana’s diversification drive to wean the economy off oil and gas – and the automobile sector is “a real driver” of industrial growth, said Lavrentyev.

Output at AllurAuto will be flat this year: it has shelved plans for a massive boost to 20,000 vehicles, scaling back to 8,500. Executives cite the flood of Russian imports as the reason for the reduction.

Kazakhstani manufacturers and dealers have long accused Russian rivals of protectionism, despite the EEU’s theoretical open market – and Moscow has just announced another $26-million injection to prop up its flagging automobile industry.

Astana is responding in kind, with a $107-million package to fund vehicle loans to stimulate demand, and there are additional measures under discussion between the government and industry executives.

Mutterings about unfair competition notwithstanding, Lavrentyev sees the EEU as a “blessing,” opening up a market of 170 million people – 10 times Kazakhstan’s population.

He also spies opportunities as automobile giants like GM exit Russia, spooked by the ailing economy and western sanctions: “Someone has to fill this niche,” he said.

As Kazakhstan’s dealers slash prices to compete with Russian automakers, Astana has ruled out one measure that would stop buyers going across the border searching for bargains: a snap devaluation to weaken the tenge against the ruble (a sliding devaluation is planned instead).

Automobile magnates back that strategy, since sudden devaluation (as that carried out in 2014) creates economic havoc and is no “panacea,” Nurlan Smagulov, president of the auto dealership Astana Motors, said in January; Lavrentyev also favors a “firm tenge.”

Like other companies, AllurAuto – which employs a 2,500-strong workforce – is “belt-tightening all round,” he said, including a 15-percent pay cut for top management because “the soldiers will not fight if the general is sitting gorging himself.” He ruled out job cuts on the shop floor, but added that back office cuts were possible.

He believes there is ample room for expansion: car penetration is low in Kazakhstan, at 270 per 1,000 people (against 439 per 1,000 in the United States), and half of the cars already on Kazakhstani roads are over two decades old.

With the right “state protection and support,” concludes Lavrentyev, Kazakhstan’s nascent automobile industry has every chance of “growing its muscles and capacity.”