Gig workers appear to have borrowed a leaf from energy and mining industry employees. 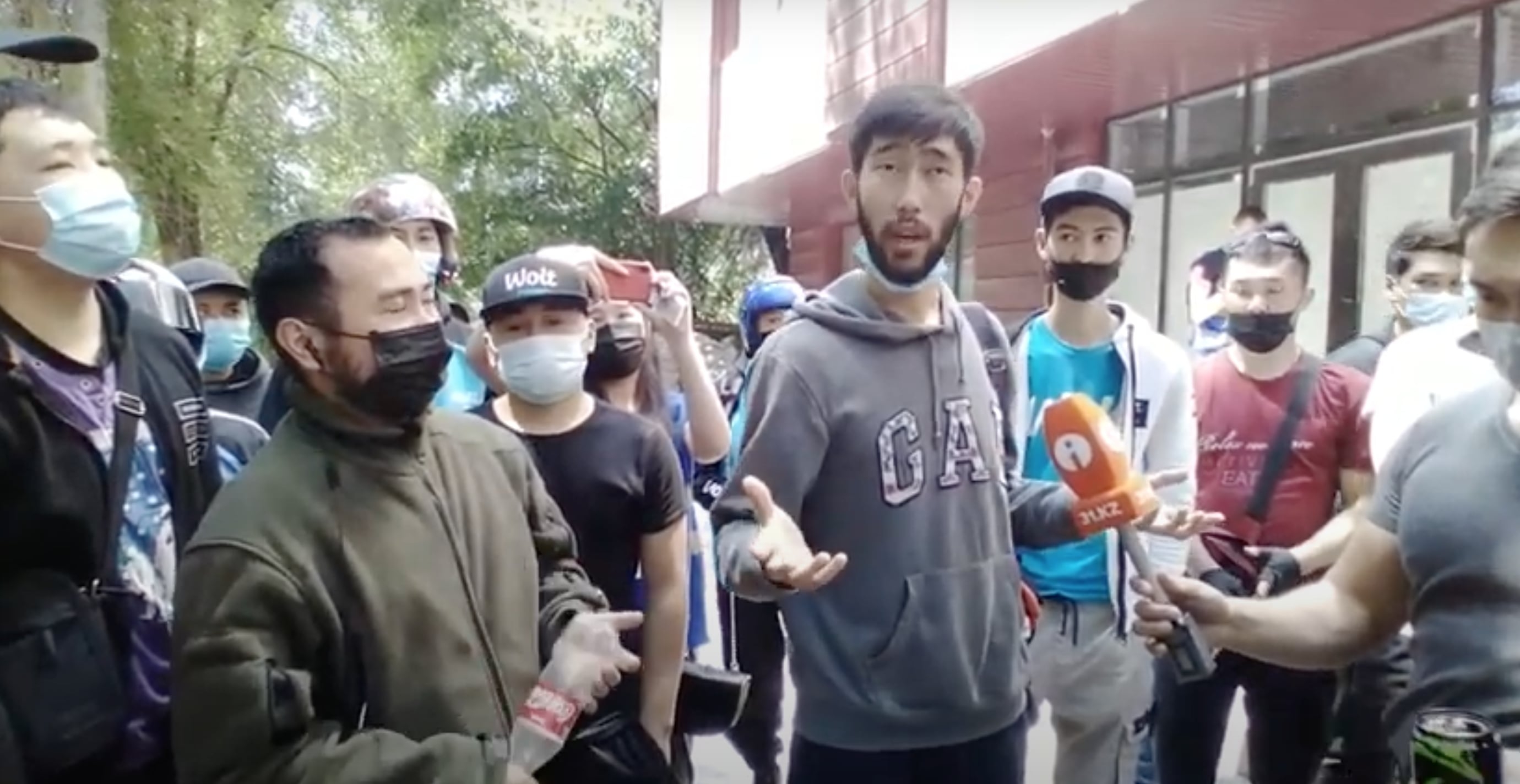 Screenshot from a live stream of the May 18 picket outside Wolt Almaty offices.

Labor activism in Kazakhstan is now extending into the gig economy, and once again, as has happened in recent standoffs at energy and mining companies, workers appear to be gaining the upper hand.

Earlier this month, around 100 couriers working for the Finnish-owned Wolt food delivery service mounted a rally outside the company’s Almaty offices to complain that their remuneration had been slashed by half. Since drivers pay for the costs associated with deliveries out of their own pocket, earnings now provide only for their basic needs, the couriers said.

Demonstrators also complained that Wolt had taken on new couriers, putting a squeeze on those already working for the company.

Alibek Yesov, the head of Wolt in Kazakhstan, said the cost rationalizations were due to a drop in demand for their services during the Islamic holy month of Ramadan, which began in mid-April.

Unimpressed by this explanation, couriers again picketed on May 18. In addition to their gripes about pay, they complained that around four dozen workers had been blocked out of the system.

Wolt said the number of suspended couriers was only 18, much lower than was being claimed by demonstrators, and that they had been penalized for threatening staff members with violence and breaking delivery rules by refusing to accept orders with cash payment.

In the end, however, Wolt was forced to succumb to demands after local authorities intervened. Yerzhan Seitenov, head of Almaty’s Almaly district, went to the company's offices in person and negotiated the climbdown. Previous rates have now been restored and the suspended couriers have been allowed back.

Workers for one of Wolt’s peers, Chocofood, were intent on going down the same path. They were planning to hold similar rallies, but they managed before doing so to secure pledges from the company that pay rises would arrive in June and that bonuses would be paid for drivers executing their orders promptly.

These victories have now emboldened courier workers to apply for permission to register a union to represent them.

The way in which the authorities put the thumb on the scale has not been to everybody’s pleasing, however. Muslim Khasenov, a lawyer and labor market expert, told Orda news website that he was confused by a pledge from officials to ensure that couriers’ earnings remain “in compliance with market rules.” Couriers, like drivers for app services, work without employment contracts and do not, as a result, enjoy legal protections, he said.

Yerzhan Yesimkhanov, a partner with the Almaty office of law firm GRATA, said local officials were out of line in intervening as they did. This was a matter for the courts, he wrote in a Facebook commentary.

“I’m just shocked at what impact this wild situation might end up having on foreign business, because it clearly demonstrates that Kazakhstan is a country in which an administrative body can intervene in any market issue at its discretion,” he wrote.

While the government has in the past shown little obvious enthusiasm for backing up workers, the pervasive crisis precipitated by the COVID-19 pandemic seems to have forced something of a rethink.

Mining and oil companies across the country have been targeted with a wave of strike actions since the start of this year, usually for pay, and in contrast with what has tended to happen historically, employers have caved or sought compromises.