Kazakhstan: Foreigners to Do Heavy Lifting for Astana after Attack of "Champions' Disease" 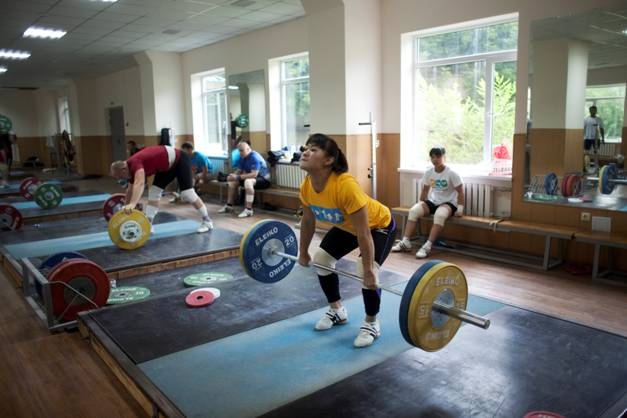 The afternoon training session for Kazakhstan’s Olympic weightlifting team is noisy business. Every few seconds, it seems, one of the team lets a 100-kilogram barbell drop to the floor and the room rings with a shuddering clang.

At a remote sanatorium in the hills surrounding Tekeli, 300 kilometers from Almaty, the team is already training twice a day, week in, week out, for next year’s London Olympics. Enver Turkeleri, the venerable Bulgarian Turk who oversees the team’s strict training regime, shuffles around inspecting his charges with a benevolent eye, noting the weights they lift. There are 12 athletes and four trainers working during a recent visit. But one person is conspicuous by his absence.

Ilya Ilin, 22, returned from Beijing a hero in 2008, having won Kazakhstan’s first Olympic gold in its independent history.

Mention his name now in Tekeli and people go quiet.

“He has the disease of Olympic champions,” sighed Vilory Pak, his former personal trainer, breaking off to bellow: “Don’t be a girl, lift it like man!” to a muscled female lifter.

“It’s a real disease, you know,” he continued. “They want freedom, they think they’re real professionals, and they don’t want to obey discipline.”

Asked why Ilin isn’t there, Alexey Ni, the team’s lead trainer, simply put his finger on the end of his noise and pushed it up into the air. “After his gold at the Beijing Olympics he stopped training and he spent his time in nightclubs, drinking whisky,” Ni said.

Ilin admitted as much after his victory in 2008: “I'm enjoying the rest and living a life I could never live when I was training to stay in shape,” he told Megapolis, an Almaty newspaper.

“After Beijing everything was different,” Ilin added. “It is impossible to convey the feeling you get when you stand in front of a stadium full of eight thousand people, and when in every town or village simple people say what they experienced watching me. It's wonderful to know that all the effort was not in vain.”

Now Ilin, who Ni says received $250,000 from the Kazakh government and another $1 million from other sponsors after his Olympic win, is reportedly training in Poland. “He’s training now, but it’s not so sure that he can take part in the Olympics,” Ni said with a shrug.

If he doesn’t qualify, Kazakhstan will find itself in an awkward predicament.

With Ilin out of the picture, the country's three best Olympic hopes in weightlifting are women that Ni has poached from nearby countries over the last five years. There’s Svetlana Podobedova, a Russian originally from Siberia who last year won the Weightlifting World Cup in Antalya, Turkey. Ni recruited her in 2007. She secured a position on the team by marrying Ilin, although the pair is now divorced.

Then there’s Maiya Maneza and Zulfia Chinshanlo, two ethnic Dungan lifters originally from Kyrgyzstan. They won gold and silver respectively in the Asian Games in 2010.

Kazakhstan will at best get four spots for weightlifting in the 2012 London Olympics. So chances are that there will be only one born-and-bred Kazakhstani on the team — Vladimir Sedov, a local boy from near Tekeli, who barely missed a bronze in Beijing.

“Of course it’s a shame,” said Pak, the trainer. “We are pretty uncomfortable that we don’t have Ilya Ilin, that we don’t have a Kazakhstani champion. But because we have brought those people in from outside, it makes for better competition and we like that.”

The Kazakhstani training program is hardly a sophisticated feat of science and technology. The athletes eat normal food, albeit in vast quantities, and the training hall is only half finished, with its entry hallway still unpainted and light bulbs hanging unadorned from the ceiling.

But according to Ni, the "Bulgarian" regimen Turkeleri has designed is unique in its rigor, with athletes training in the morning, then sleeping in the afternoon (“like kindergarten”), before another session in the evening. “No one else can stand this training regime -- not in Russia, not in China. Only we do it,” said Ni. “Those who can do it, they continue training. Those who are weak, they can’t withstand it.”

Of the 60 people who started training with the Olympic team, he says, only about 20 now remain. Sedov, the local, is the most dedicated of them all, according to Podobedova. The two have been a couple since she divorced Ilin in 2007.

“He has a strong desire to win, and he trains a lot. When we are at home, he doesn’t relax, he continues training," she says. "I sometimes take breaks and have a rest -- not Vladimir.”

Perhaps he's haunted by the ever-present specter that the champion might return and take his spot in London.

“Ilya, he’s very talented,” Sedov said. “llya has never obeyed the regimen. He can do anything."