Activists are using Women’s Day to challenge, rather than reinforce, gender stereotypes. 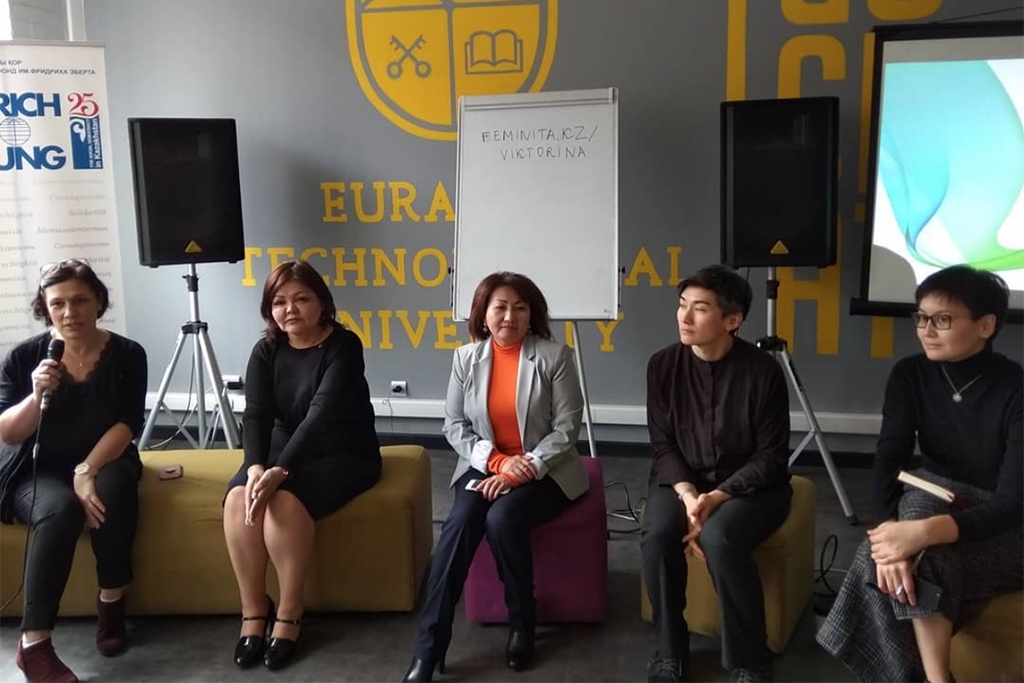 FemAgora is a week-long feminist festival held in Kazakhstan’s business capital, Almaty, in the run-up to International Women’s Day on March 8. (Firalevy/Instagram)

Forget flowers, chocolates and saccharine toasts to the beauty of the fair sex.

That was the takeaway from a week-long feminist festival held in Kazakhstan’s business capital, Almaty, in the run-up to International Women’s Day on March 8.

“We want to talk about women’s rights, rather than the other bullshit people talk about on March 8,” explained Gulzada Serzhan, a co-founder of feminist collective Feminita and one of the organizers of FemAgora.

FemAgora, as its name suggests, served as a forum for public discussion on some burning topical issues by participants drawn from the worlds of business, politics, the arts and academia.

It was not just chin-stroking and jaw-jawing, however. Debates were interspersed with lectures, art exhibitions, film screenings, role play exercises, story-telling and poetry performances.

Serzhan lays some of the blame for how Women’s Day is marked on an earlier political age.

“[The holiday] is about how you have to be beautiful and bring joy to the eyes of people who look at you,” Serzhan told Eurasianet. “It’s been perverted, during the Soviet Union, and we should bring back the original meaning.”

First celebrated in New York in 1911, Women’s Day sprang out of the international socialist movement and the struggle for female suffrage. The Soviet Union adopted the holiday as evidence of its stated ambition to advance emancipation for all sexes.

With time, that celebration of feminism degenerated into a scheduled display of sugary sentimentality that at best masks, and at worst reinforces, glaring gender inequalities.

“Men try with flowers and by cooking dinner on that day to compensate for all the rest,” civil society campaigner Zauresh Battalova said derisively at one FemAgora event.

In Kazakhstan, as elsewhere in the former Soviet Union, March 8 is marked by men presenting their womenfolk – wives, mothers, sisters, friends and colleagues – with bouquets, chocolates, jewelry and, less romantically, gifts like irons and kettles.

President Nursultan Nazarbayev is a culprit in propagating this maudlin excess. As he once pronounced on Women’s Day, all females want “one and the same thing: love, peace and family happiness.”

Anything with a harder edge gets immediate pushback in Kazakhstan. When feminists asked Almaty city hall if they could hold a march in support of reclaiming Women’s Day, their applications were rebuffed, with officials citing technicalities for not granting permission until they ran out of time to re-apply.

The reality is slightly more complicated. Authorities are displaying clear signs of nerves at the moment in the face of an improvised mother-led protest movement that gained momentum in the wake of a fire in Astana last month that killed five young children. Critics of the government said the tragedy would not have happened if the state had done more to help impoverished families.

Nazarbayev has recently acknowledged the burden carried by mothers in large families, and announced an assistance package for them, but his attitudes about women in general appear unlikely to evolve.

This week, he cracked another of his customary Women’s Day jokes, in a similar vein to a previous gag whose punchline revolved around the notion that men invented kissing to shut women up: “A man dislikes how the government and his wife spend money. But he has the guts to criticize only the government!”

This kind of talk raises hackles among people seeking to combat gender stereotypes.

“It’s definitely necessary to talk to women, not only about flowers, but also about research, about identity, about her rights, about health, about art,” said Zhanar Sekerbayeva, another co-founder of Feminita.

Economic fairness was also on FemAgora’s agenda. Talk focused on bridging the pay gap – Kazakhstan’s women earn 31 percent less than men – and the need to break the glass ceiling.

Still, even the activities around FemAgora suggested change will probably be slow and halting. As a discussion panel on women in politics took place at an Almaty university, outside the lecture hall female students dolled up for March 8 accepted bouquets and posed for selfies by a display of purple balloons.

Even the relevance of the topic raised a sigh among some people.

The data show this is an urgent matter, however.

“Women are mainly represented on the middle and lower rungs,” said Battalova, a former senator who runs the Foundation for the Development of Parliamentarianism. “Women are not present at the level of decision-makers.”

Kazakhstan does have one prominent female politician: Nazarbayev’s daughter, Dariga Nazarbayeva, a senator. But there are only two women in the Cabinet. There are no female mayors of cities or governors of regions. And women occupy 22 percent of seats in parliament.

This is not far below the world average of 24 percent. Kazakhstan is far from the world’s worst performer on gender equality, ranking 60th out of 149 countries in the World Economic Forum’s Global Gender Gap Report.

And yet, Astana should pay attention to a problem that is detrimental to Kazakhstan’s state-building endeavor, Battalova argued, since “it’s not skirts or trousers that resolve problems but clever minds.”

In his Women’s Day greetings, Nazarbayev volunteered a glib explanation for low representation of females in public life. Women outperform men, so men exclude them in return. And anyway, no matter how successful they are, women’s minds are always on “their family, their nearest and dearest.”

This kind of received wisdom comes in for some fire.

“We have a traditional patriarchal society,” with expectations of “proper” female behavior, said FemAgora attendee Alima Zhanmukanova. “We need to overcome these stereotypes and accept women as full-fledged members of society.”

Those who step out of line face vilification and violence. Last year, a model was trashed on social media then beaten up by her boyfriend after wearing revealing clothes on the catwalk. In neighboring Kyrgyzstan, singer Zere faced death threats after revealing a bit of flesh in a music video.

Participants at FemAgora were eager to explain that their event was not intent on foisting an alien and threatening feminist message onto an unsuspecting public.

It is more about getting women’s concerns into the mainstream. Getting “the problems of gender equality that are being raised to come out of the shadows and be heard,” said Saule Suleimenova, an artist attending the FemAgora arts festival.