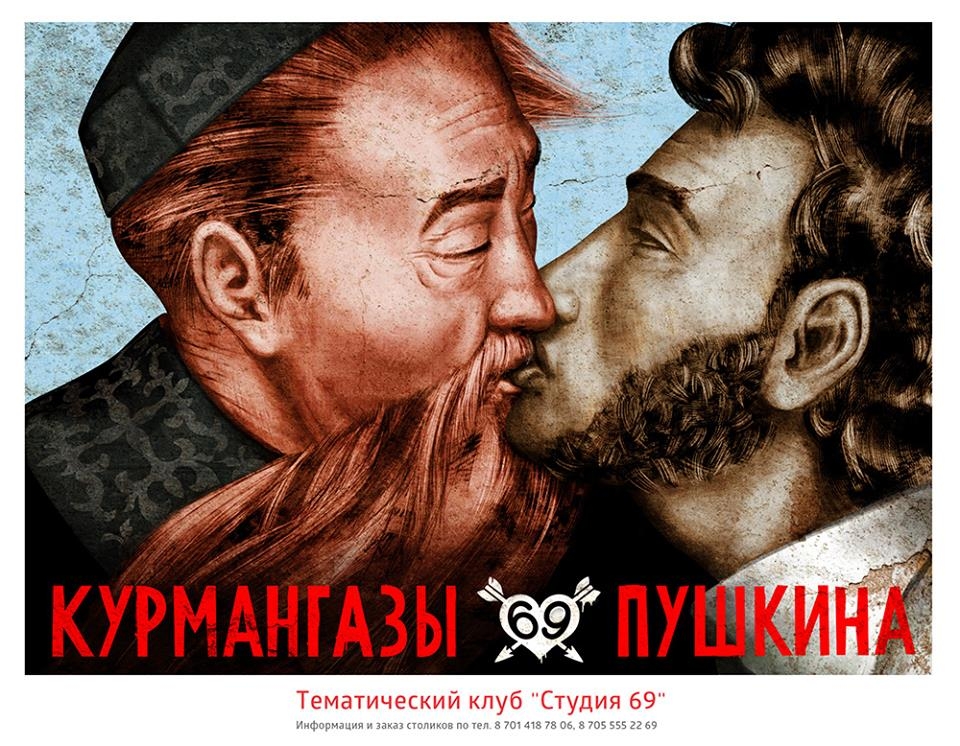 Even in one of the most liberal Central Asian cities, a little light homoerotica that would barely turn heads in New York or London can still spark furious debate, threats of lawsuits, and calls to the police.

The dispute is about an advertisement for an Almaty gay club that features two prominent 19th century cultural figures, Russian poet Alexander Pushkin and Kazakh composer Kurmangazy Sagyrbayuly, enjoying a passionate kiss (pictured). The club, Studio 69, happens to sit at the corner of streets named for Pushkin and Kurmangazy.

According to zakon.kz, the reaction was mostly negative on social media, as people found irreverence toward their cultural heroes too difficult to swallow. "There is no limit to [my] outrage. How could [they] come up with something like this?” one user wrote.

Police told TengriNews they had registered an official complaint. And a descendant of Kurmangazy has threatened to sue for moral damages.

But some defended the poster (which riffs off of the famous image of East German leader Erich Honecker and the Soviet Union’s Leonid Brezhnev locking lips in East Berlin in 1979). "At least [there is] some creativity in the barren steppe of domestic works,” TengriNews quoted a local social media user as saying.

One of the artists, Valery Volodin, defended the poster. “One can be proud of this work. First of all because it works: people understand and remember the address. Secondly, it is a brave work, and in the case of the gay movement, traditionally living on the edge, it is more than accurate and justified,” Volodin wrote on Facebook.

The poster won an award for advertising firm Havas Worldwide Kazakhstan at a competition in Bishkek on August 23. But the reaction at home prompted Havas Worldwide to apologize on its Facebook page and promise the image will not be displayed in public: “Acknowledging the invaluable cultural contribution of the great Russian poet and the great Kazakh composer, we officially announce that this poster will not be printed, posted or published in paid media.”

Homosexuality was decriminalized in Kazakhstan in 1998, but antigay attitudes are common. In May, antigay activists built a wall around a gay nightclub in Almaty. And in recent years, officials have debated adopting a Russian-style ban on so-called “gay propaganda.” Citing Kazakhstan’s “national mentality,” one lawmaker last year called for legislation that would classify homosexuals as “criminals against humanity.”