The Almaty rodent is made from straw and is 12 meters tall. 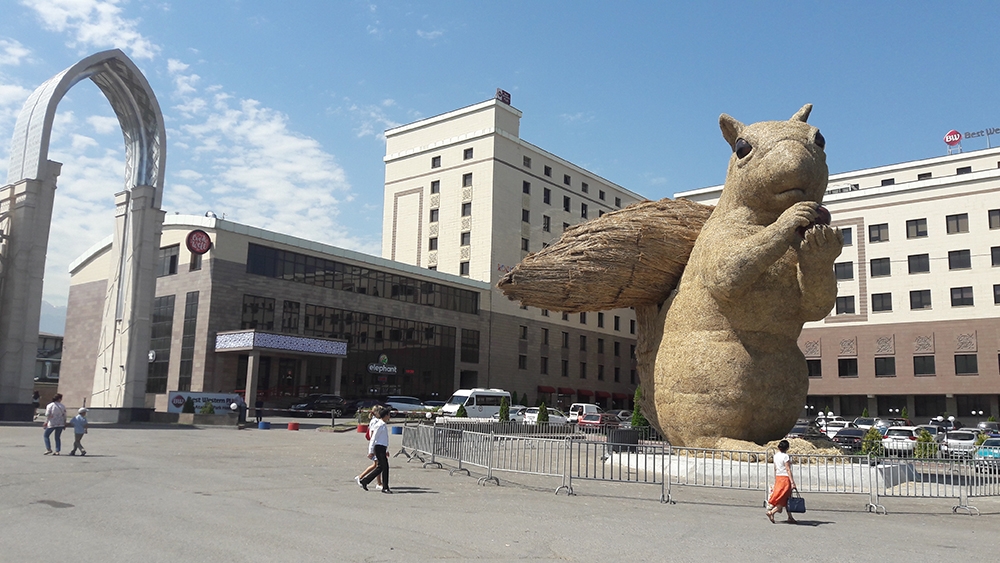 A giant squirrel astride a busy main road in Almaty, Kazakhstan, caused residents to do a double-take as they headed to work earlier this week after a long weekend of nationwide celebrations for Astana’s 20th anniversary.

The 12-meter-high rodent statue, made from straw on a wood and steel frame, appeared overnight in front of the entrance to the city’s Atakent Park. The sculpture is the work of British conceptual artist Alex Rinsler and South African sculptor Marius Yansen van Vuuren and cost a cool 23 million tenge ($44,000) to build.

The straw sculpture has sparked a flurry of online activity — most of it negative.

“It is not just a squirrel … it is a holy squirrel, it brings Kazakhstanis luck and leads to a bright future, foreigners said... to stupid Kazakhs whose money chickens do not even peck at..., and went off to London having received 23 million))),” an online wag by the name of Zhumaby commented under a news item on Nur.kz.

“She looks more like a rat. [The money] could have helped those who need money for operations,” commented Tagir, also on Nur.kz.

The oversized squirrel was commissioned by Almaty city hall in collaboration with FUNK, which describes itself as a social solutions company, as part of the Art Energy Almaty festival. City hall provided 15 million tenge ($44,000) of the installation‘s 23 million tenge ($67,000) costs, according to a message posted by Mayra Izmailova, director of FUNK, on Art Energy Almaty’s Facebook page.

Blogger Alexey Kurapov took a satirical look at the online furor, posting a video overdubbing a clip from the 1997 German film “Knocking on Heaven’s Door” on Facebook in which the blogger is berated for not writing about the sculpture. "Facebook is talking about nothing but the squirrel, how boundlessly large it is, the straw that it's made from, who its creator is, and how it can be set ablaze." It ends with the Kurapov character saying in plaintive tones: "I want to go to the squirrel!"

The sculpture is one of 16 works of public art being installed around Almaty this summer. This has led to heated debate about the worth of spending public money on such endeavors. Astana’s 20th birthday celebrations cost more than $55 million.

“Around 10 needy families could be given apartments for this [money] ... it would be much better,” commented Eldar on Tengri News.

The artist expects the giant straw squirrel to remain on its spot about nine months. Caustic online commentators say this will give rise to more money-wasting. As Glas Naroda quipped in a comment on Tengri News: "They'll burn the straw and make a bonfire and spend another 23 million clearing up.”