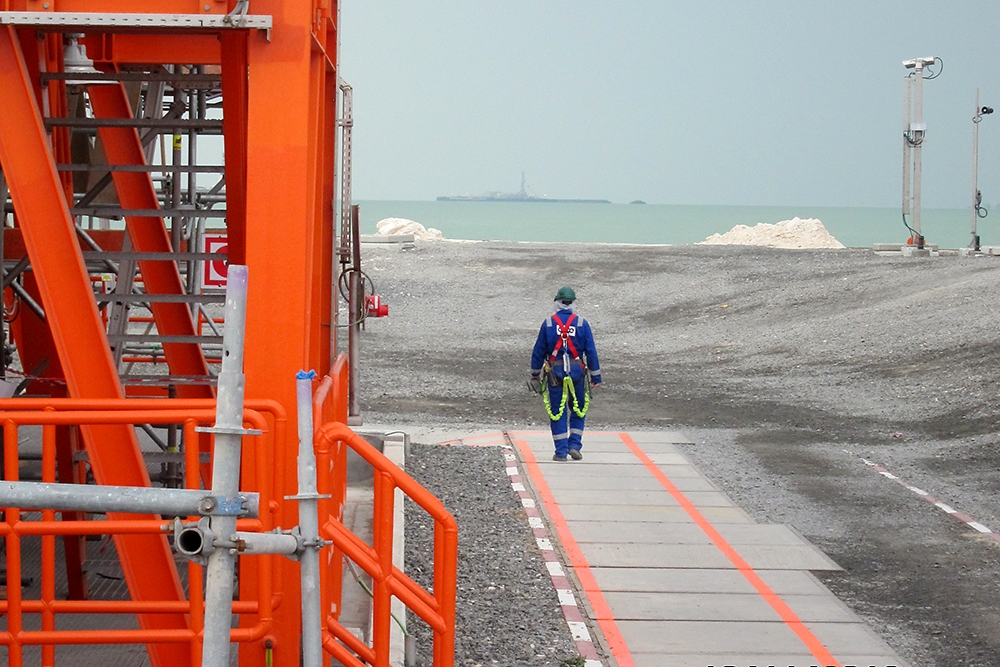 An oil worker walks at an onshore service facility serving installations (one can be seen in the distance) belonging to Kazakhstan’s Kashagan offshore oil field in the Caspian Sea in October 2012. With the global benchmark for oil plunging below $50 per barrel last week, Kazakhstan’s energy sector is feeling the pinch, leading to a dramatic drop in revenues, and consequent layoffs. (Photo: Joanna Lillis)

With memories of the months-long strike in the western town of Zhanaozen that culminated in a bloody crackdown in 2011 still fresh in the memory, the government has put measures in place to prevent the seeds of industrial unrest.

As the global benchmark for oil was plunging below $50 per barrel last week, Sino-Kazakhstani drilling company Velikaya Stena (Great Wall) announced a raft of layoffs. A company official contacted by EurasiaNet.org on August 12 confirmed that 203 staff had been fired and that another 200 layoffs are expected in the fall.

Velikaya Stena, which is based in the western oil-hub city of Aktobe, is only one of many feeling the squeeze from the low price for oil, which accounts for a quarter of Kazakhstan’s economy and 60 percent of its balance of payments.

“Low oil prices have hit profits at Kazakh producers,” Alex Nice, Kazakhstan analyst at the London-based Economist Intelligence Unit, told EurasiaNet.org. “They have also struggled because, unlike the Russian central bank, the Kazakh National Bank has held the currency relatively steady against the dollar since February last year. As a result, labor costs for commodity producers have remained high in dollar terms.”

The scale of the revenue squeeze in the oil sector was demonstrated last month when the National Bank was compelled to step in and prop up Kazakhstan’s cash-strapped oil giant, KazMunayGaz.

The layoffs in Aktobe have heightened the mood of despondency in the energy sector, a source at CNPC-AktobeMunayGaz, a Sino-Kazakhstani joint venture between the two countries’ state energy companies, told EurasiaNet.org on condition of anonymity. “The mood is very low, because people don’t want to lose their jobs,” the source at the Aktobe-based firm said.

A distressed oil worker quoted in a report on the layoffs was indicative of a high sense of concern among those who still have jobs at Velikaya Stena, which has cut salaries by half in a cost-cutting measure to compensate for falling revenues. “I’m the only breadwinner in the family,” Kanay Borekeshov told the Moy Gorod regional news website. “I have four children. … The money we get is barely enough for us. And if they cut the salary and then leave us without work at all, we will be finished.”

“We currently have only seven teams working out of 24,” lamented Arman Kamalov, Velikaya Stena’s deputy director, in remarks quoted by Moy Gorod. “Work is drying up.”

The experience of Zhanaozen has taught authorities the value of more efficient negotiation. Since those events, the government has pressured oil companies to come to terms with strikers on the rare occasions that industrial action occurs. A strike in May at a company servicing the massive Karachaganak field in northwestern Kazakhstan was swiftly ended with a pay offer.

But Astana is showing that it is still ready to wield the stick.

Trade unions are also bristling over the drafting of a new labor code. In a statement on July 23, the Federation of Trade Unions of Kazakhstan condemned the pending legislation, which is intended to revise rules on numerous points, including contract termination and salary. “The new draft of the Labor Code strengthens the position of the employer at the expense of workers’ rights,” the statement said. “Adoption of the Labor Code will create the conditions for increased social tension in labor collectives and even across entire industries.”

While oil workers are alarmed by the impact of low prices on their employers, the CNPC-AktobeMunayGaz source told EurasiaNet.org there is little appetite for striking. “People are dissatisfied, but they understand that oil prices are low so they are treating [cost-cutting measures] with understanding.”

Over the near term, analysts believe Kazakhstan’s oil companies can weather the storm. “Currently, there is no reason to expect mass dismissals as the crisis is just emerging,” Kassymkhan Kapparov, director of the National Bureau for Economic Research, told EurasiaNet.org.

It all seemed so much brighter only two years ago. Astana was counting on a massive boost in output with the launch of the super-giant Kashagan field. Delays there now mean it will not start pumping oil, as well as generating revenue for the treasury, until 2017.

The government says oil output will be flat this year, at 80 million metric tons, while OPEC forecasts that Kazakhstan’s production will actually fall slightly in 2015. Kazakhstan’s budget is based on an oil price of $50 per barrel, so any sustained fall below that level will put pressure on government spending.

Officials are already dipping into the country’s National Fund – a pool of accumulated energy revenue set aside for a rainy day – to breathe life into the flagging economy, which Astana forecasts will grow at just 1.5 percent this year.

“Low commodity prices are likely to have a significant impact on Kazakhstan’s economy,” said Nice. “[Gross domestic product] growth is likely to slow to 1-2 percent this year, down from 4.3 percent in 2014.”

“The government has responded with an infrastructure program to offset weak investment, but it is cutting back spending in other areas,” he said. “If commodity prices and exports also remain weak in the coming years, it’s hard to see where the drivers of growth will come from.”