Kazakhstan: Government cracks down on supporters of the constitution

Roman Zakharov has been jailed for citing constitution to say power lies with the people. 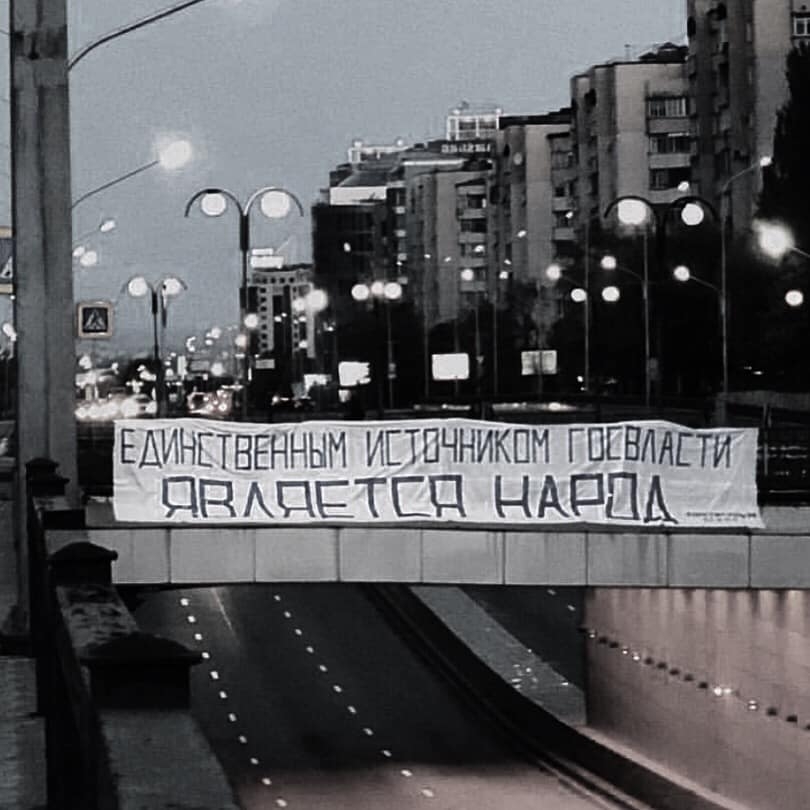 Sign of the times: The sole source of state power is the people. (Photo: instagram.com/freekazakhs/)

Authorities in Kazakhstan are cracking down on citizens holding public demonstrations in support of the constitution.

After he hoisted a banner reading "The sole source of state power is the people” across a pedestrian overpass in the city of Almaty on April 29, Roman Zakharov was detained by police and later sentenced to five days in jail on charges of petty hooliganism.

The words on Zakharov’s banner were a direct quotation from the Kazakhstan Constitution, which was adopted in a referendum in 1995.

Zakharov told reporters that his stunt was done as a gesture of solidarity with Asya Tulesova and Beibaris Tolymbekov, a pair of activists now serving 15-day jail sentences for unfurling a banner on the sidelines a marathon in Almaty on April 21 to call for fair presidential election in June. Their sign read: “You cannot run from the truth” and bore the hashtags #forafairelection and #Ihaveachoice.

Groups like Amnesty International have urged the government of Kazakhstan to release the pair, arguing that the “actions of the protesters should not have been subjected to any sanction, criminal or administrative, as they are protected by the rights to freedom of expression and peaceful assembly.”

These shoots of political activism have appeared in advance of the snap June 9 election that has been called by acting President Kassym-Jomart Tokayev. There are few doubts Tokayev will attain a crushing victory, although some doubts do remain about just how crushing his win will be.

Other than Tokayev, almost all the people who have submitted their registration papers to participate in the election are obscure political nonentities. Questions remain about whether Amirzhan Kosanov, an opposition politician who was nominated to contest the vote by the Destiny of the Nation movement on April 26, will be successful in having his candidacy approved by election officials.

Although most disgruntled Kazakhs have reserved their grumbling about the lack of real choice to social media, this small handful of activists has taken their unhappiness to the streets. The severe reaction of the police has underscored how eager the government is for the vote to proceed without any shows of public discontent.

By appealing to the letter of the law in their protests, Tulesova, Tolymbekov and Zakharov appear to have drawn inspiration from similar demonstrations in Russia in September 2016, when a group of demonstrators stood in front of the State Duma in Moscow and read out the Russian Constitution. Those activists too faced sanctions.

The next spate of detentions in Kazakhstan will happen on May 1. That is the date set by exiled anti-government gadfly Mukhtar Ablyazov for supporters to go onto the streets to protest in defense of democracy.

Nur-Sultan dismisses Ablyazov as little more than a power-hungry crook who they say purloined billions from the bank he used to run. Ablyazov denies those allegations and has used his social media profile to cast himself in the mould of a fighter for freedom.

The General Prosecutor’s Office has circulated a note to warn the public against taking up the call for demonstrations, however, stating that any such rallies will be considered a “crude violation of the rules on the organization and holding of peaceful gatherings and meetings.

Indeed, demonstrators should technically apply for permission to hold a rally from the authorities, although such approval is in fact almost never granted. On the rare occasions permission is given for anti-government activists to rally, they are allocated inconvenient and out-of-the-way locations — a transparent ploy to minimize the impact of the gathering.