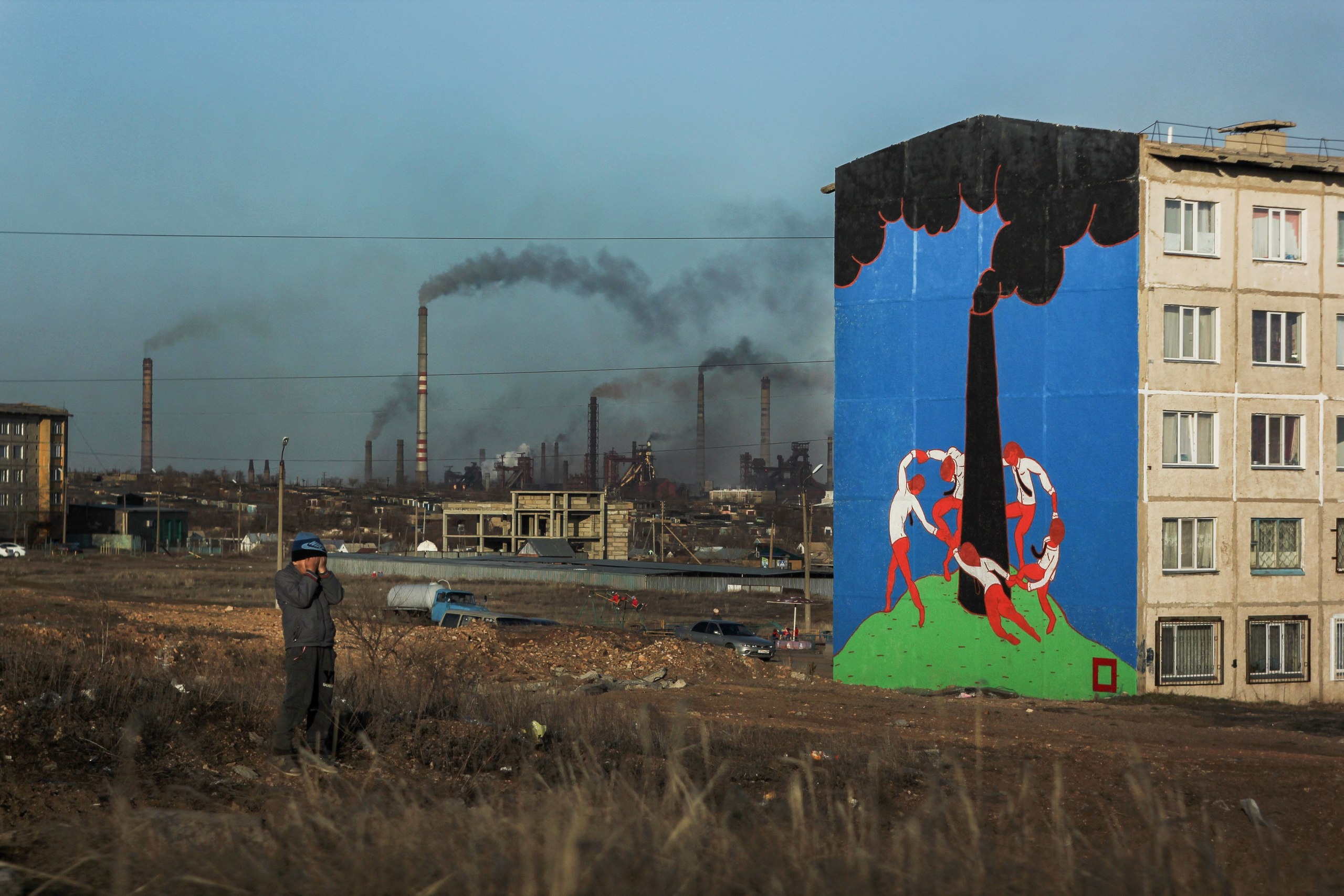 A mural created by street artist Pavel Kas in the industrial city of Temirtau.

A graffiti artist in the industrial Kazakhstan town of Temirtau has ended up in the authorities’ crosshairs for creating a giant mural in protest at the environmental damage caused by a local smelter.

The mural was painted on the side of an apartment block by Pavel Kas in the style of Henri Matisse’s The Dance and shows a circle of human figures around a chimney stack chugging out thick black smoke. The vividness of the painting is in ironic contrast to the bleak backdrop of the real factories.

But one city’s vandalism is another city’s art, and so the town hall in Shymkent, in southern Kazakhstan, has now invited Kas to take part in an art festival being held there on May 13-15.

Shymkent Art Days 2016 will host street artists, sculptors, architects, designers and graffiti artists for an event to celebrate contemporary style. While Temirtau has reacted poorly to the notion of people painting on its walls, Shymkent is actively inviting festival participants to break out the paints.

“Pavel Kas is a lively representative of informal art dealing with current issues. Shymkent will be happy to welcome Pavel to its festival and organizers will provide all materials needed to create works that will decorate our city,” Shymkent deputy mayor Kairat Nurtai said in remarks reproduced on the city’s official website.

Temirtau is the heart of Kazakhstan’s steel industry, which environmentalists say has had a heavy toll on the quality of the air. One the earliest workers at the city’s first blast furnace in the 1960s was none other than President Nursultan Nazarbayev.

In the early independence years, the steel plant was bought by ArcelorMittal. Despite the city’s economic importance for Kazakhstan, it remains a hotbed for implacable social ills, such as drug addiction and crime.

It is ironic that it was Kas’ commentary on the environment that caught the attention of authorities in Shymkent, since that city is considered another of the most polluted in Kazakhstan. Heavy industry there has over the years produced dangerously high concentrations of lead and carbon oxides in the environment, severely endangering the health of local residents.

Still, it is heartening that some places look to these and similar issues in the spirit of openness, even if others are less eager.