By gaining access to Aktau and Kuryk, the United States adds additional routes to circumvent Russia. 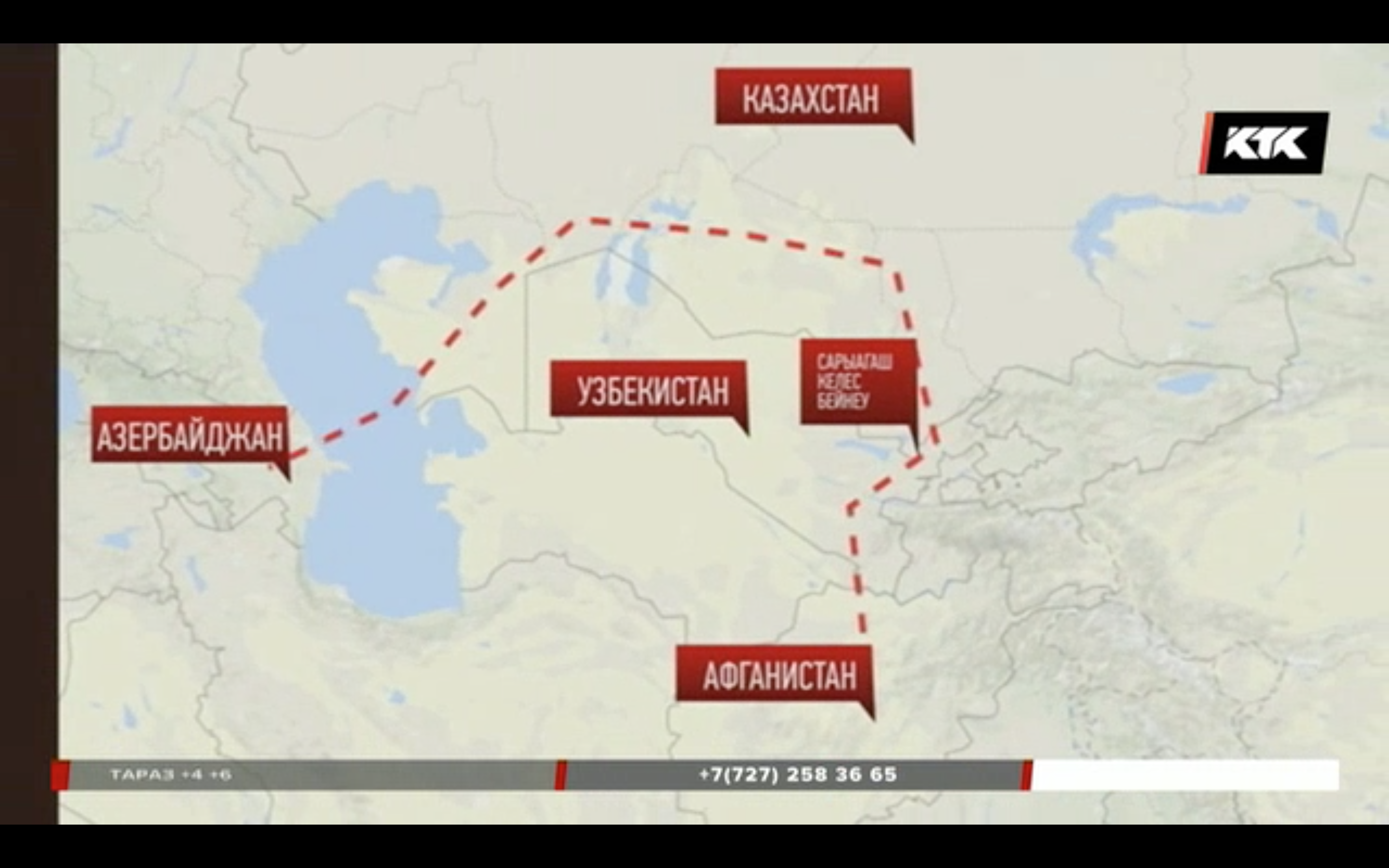 A graphic from a report on Kazakhstan TV station KTK illustrating the route now open for US supplies to Afghanistan.

Lawmakers in Kazakhstan have approved an agreement allowing the United States to use two of the nation’s Caspian Sea ports as transit points for shipping nonmilitary material to Afghanistan.

By gaining access to the ports of Aktau and Kuryk, the United States will gain an additional option in circumventing Russia, which has previously also provided transit options for NATO supplies to Afghanistan.

Speaking on March 7, Kazakhstan’s Foreign Minister Kairat Adrakhmanov repeatedly stressed the nonmilitary nature of the goods to be delivered through the route, which will run from Azerbaijan, across the Caspian Sea, to eastern Kazakhstan before entering Uzbekistan, which has railway links with northern Afghanistan.

Adrakhmanov said that a transit deal has been in place between Kazakhstan and the United States since 2010. More than 700 containers of goods have been delivered over that period, generating 200 million tenge ($625,000) in revenue for local transportation companies, Adrakhmanov said.

The United States is engaged in a two-fronted action against two crucial partners in the Afghanistan transit issue. President Donald Trump’s administration has just announced it intends to pursue further sanctions against Russia in a reprisal against alleged interference in the 2016 elections. U.S. citizens are already prohibited from dealings with Russian state-run companies like Russian Railways, and these latest advertised moves are only likely to further restrict potential options in transportation cooperation.

Pakistan has usually presented the simplest transit option whenever feasible, but problems have regularly cropped up there too. Islamabad suspended overland U.S. military supplies transit for eight months in 2011-12 after U.S. troops killed dozens of Pakistan soldiers on the Afghan border.

U.S. ties with Pakistan have endured yet another setback since January after Washington announced it was suspending what the New York Times has calculated might be around $1.3 billion worth of annual military aid. Inevitably, the snub was accompanied by a tweeted barb from Trump, who accused Pakistan of giving the United States “nothing but lies & deceit, thinking of our leaders as fools.”

Such is the level of irritation in Islamabad that Trump may even be pushing Pakistan into Russia’s arms, creating an alliance that could severely hamper any Afghanistan strategy.

This rapidly devolving situation provides useful context for understanding why Trump seemed so eager to roll out the red carpet for President Nursultan Nazarbayev in January. During their meeting at the White House, Trump praised Kazakhstan fulsomely for its “continuous logistical support and access to Afghanistan.”

Does this all make Kazakhstan a spoiler of Russia’s efforts to complicate Washington’s life in Afghanistan? Yes and no. Astana has since the 1990s negotiated a careful diplomatic balancing act between West and East, a fact that Russia obviously factors in its decision-making. That said, Kazakhstan has evinced growing signs of uneasiness over its obligatory strategic symbiosis with Russia and taken tentative measures to address this.