The country is experiencing a turnaround after apparent early successes. 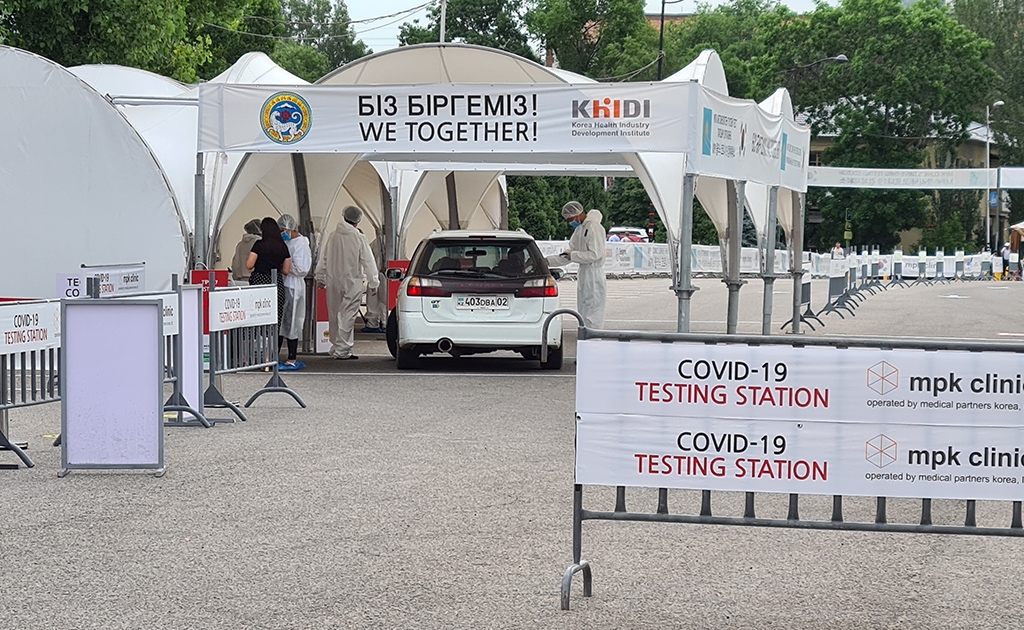 With official coronavirus bulletins showing Kazakhstan’s outbreak reverting to a worrying trend in recent days, the president this week sought to inject a note of reassurance.

“The situation with coronavirus has, because of the mass lack of observance of the quarantine regime on the part of citizens, remained complicated, but it is under the government’s control,” Kassym-Jomart Tokayev wrote on Twitter on June 17. “Tomorrow, it will unveil measures to stabilize the epidemiological situation.”

Details of those measures, however, would be entirely overshadowed when it emerged that Tokayev’s predecessor, Nursultan Nazarbayev, was diagnosed with COVID-19. That he is one of a number of top elite figures to become infected looks like a vivid illustration of the intensity of this phase of the crisis.

Saule Kisikova, head of the city health department in the capital, Nur-Sultan, acknowledged that the epidemiological situation is deeply troubling.

“In infectious diseases and temporary hospitals, up to 90 percent of available beds are occupied,” she said at a briefing. “Among those hospitalized, 91 percent of the patients are classified as mild to severe cases. Another 9 percent are severe or extremely severe. The number of patients on ventilators has increased fourfold.”

She provided no timeframe for that last figure.

Just as alarming, the number of patients appears to be growing fast. Kisikova said 500 people are being admitted to hospitals daily, and that half of those are admitted with symptoms of pneumonia – a condition often correlated with coronavirus infections.

One more source of worry is the seeming uptick in fatalities. The numbers are still, on paper, extremely low by the standards seen in places like Western Europe and the United States, but the trend is unnerving. Nine coronavirus-related deaths were recorded on June 17 – the highest figure in the outbreak to date. If daily fatalities were almost always limited to two at the most until the end of May, the numbers have invariably been higher since then.

The figures have, in any case, generated skepticism. Doing some gumshoe reporting, RFE/RL’s Kazakhstan service, found in late May how sections of cemeteries set aside for COVID-19 victims in the country’s three largest cities appeared to have more fresh graves than official figures would account for.

This all marks a turnaround from the apparent early successes registered in the campaign to contain the outbreak.

Kazakhstan was quick to react to detection of the first two cases on March 13. Within two days, Tokayev had approved a state of emergency and severe lockdown regimes were shortly thereafter introduced in Nur-Sultan and Almaty. Lockdown was then rolled out to other places.

As the government began counting the economic costs of those restrictions, however, conditions were eased. By the middle of May, the strictest rules were eased or scrapped. Authorities pleaded with the public to continue abiding by precautions, such as wearing masks, avoiding close contact with other members of the public, refraining from going to the workplace wherever possible, but anecdotal evidence suggests this advice has been widely disregarded.

Dinagul Bayesheva, an infectious diseases specialist at the Health Ministry, spoke frankly at a briefing this week about the epidemiologic knock-on effect of that progression of events.

“In the first three months, we localized hotspots and isolated all infected people. Thanks to this, we managed to localize the process, so the number of fatalities and serious cases was kept low,” she said. “But today the number has grown because we lifted the emergency regime, things have become more relaxed and the number of contacts has increased.”

This state of affairs has prompted the authorities to resort to restrictive measures alluded to by Tokayev.

On June 18, the government announced that over the coming weekend shopping centers, indoor markets, public transport, parks, squares, beaches and fitness clubs will be closed. People over the age of 65 will be granted only limited access to the streets. It is not yet clear whether these restrictions will be repeated in the coming weeks, though.

Prime Minister Askar Mamin instructed the government to expand the scope of PCR-based testing by opening additional laboratories, to increase the number of available hospital beds and to conduct CT scans for all suspected COVID-19 cases.

But the reliability of these figures is suspect as the testing regime has been spotty. Neighboring Russia continues to detect thousands of new cases daily, but that is in no small part down to the fact they have administered 15 million or so tests – in effect, one for every tenth person in the country. In Kazakhstan, the rate is somewhere over half that number.

In Almaty, the privately owned Korean Medical Center had been offering drive-through tests for 15,500 tenge ($38). The clinic’s website now says that registration is currently suspended, however.

In next door Kyrgyzstan, the end of lockdown regimes has brought about a similar surge of new infections. So much so that the outstanding number of extant cases – 630 on June 17 – is at a record high. Only one district – Kara Buura, in the northwest, on the border with Kazakhstan – is now deemed coronavirus-free.

Kyrgyz health officials have registered a note of exasperation, saying that they are unable to pinpoint the sources of new infections.

“It has become very difficult to determine the places and under which conditions … transmission of infection [is occurring]. We urge you to observe social distancing, personal hygiene, and to use antiseptics and masks. The rules are being regularly flouted,” Deputy Health Minister Nurbolot Usenbayev said on June 18.

All this notwithstanding, the government has downplayed talk of a lack of hospital beds. That speculation has been fueled in part by a decision to temporarily cease admission of new patients at an infectious diseases facility in Bishkek in late May.

“Our hospitals have enough beds. Moreover, new wards and hospitals are being opened,” Usenbayev said.

One such facility is the so-called Kyrgyz-Turkish hospital, which holds 72 beds and is being opened now, although it was built with Turkish government funds in 2017.

The government has also said it has, as of June 17, adopted a new patient admission system, in line with international practice, whereby asymptomatic cases are ordered home and told to remain in self-isolation. Accordingly, 176 people are currently holed up in their place of residence under routine medical supervision.