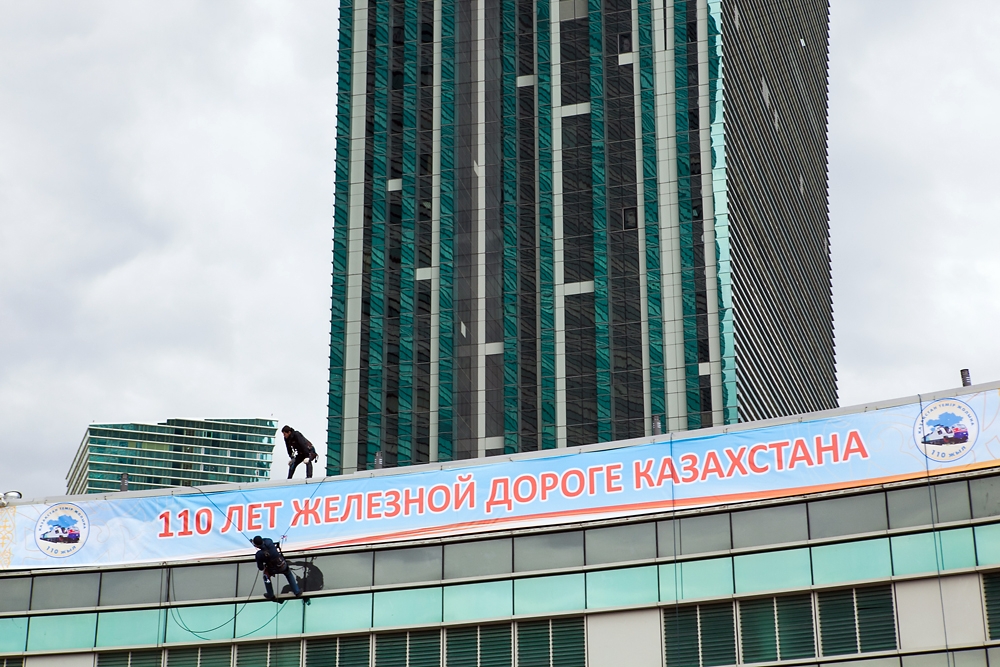 Men string up a banner celebrating 110 years of the Kazakh railroad at the Kazakhstan Temir Zholy (KTZh) headquarters in Astana last month. Samruk-Kazyna, Kazakhstan’s sovereign-wealth fund that accounts for 45 percent of the country’s economy, controls the vast Kazakh railway system, among many other state-owned businesses. (Photo: David Trilling)

When Astana launched its sovereign-wealth fund in 2008, authorities asserted that Samruk-Kazyna would modernize Kazakhstan’s economy and help attract foreign investors. Six years later, critics say the fund is bloated and lethargic, and privatization plans are stoking concerns among employees and analysts.

The fund is widely praised for its role in stabilizing Kazakhstan’s economy during the 2008-2009 financial crisis, when Samruk-Kazyna bought up majority shares in insolvent banks like BTA, Alliance and TemirBank, and extended loans to other state companies. “But starting from 2010 and onwards, the fund has been suffering from stagnation,” said Almaty-based political analyst Maksim Kaznacheev, who worked for a prominent think-tank until it closed last year.

Kaznacheev believes the fund has grown too large and suffers from bureaucratic inefficiency. According to Samruk-Kazyna’s website, the fund and its subsidiaries employ approximately 350,000 people.

In recent years, charges of corruption and nepotism have also tainted its reputation. “Important cadre appointments are made on the basis of kinship and political loyalty,” said an Almaty-based executive who has worked with the fund. He compared Samruk-Kazyna’s management structure to an inefficient Soviet-era conglomerate.

In recent months, the fund has also faced criticism over huge bonus payments to top managers and stark differences in wages for management and lay workers.

Samruk-Kazyna did not respond to EurasiaNet.org’s repeated requests for comments by phone and email.

Under a reorganization plan announced by Nazarbayev in 2012, the fund was split into two parts: Profit-generating enterprises have stayed under Samruk-Kazyna’s control, where management will be streamlined and costs cut to save $467 million over two years. Meanwhile, Bayterek, a new state holding company, took over assets focusing on economic development, such as Kazakhstan’s Development Bank and Investment Fund. Under the plan, Samruk-Kazyna will privatize more than 100 of its subsidiaries in 2014 and 2015 (the Samruk-Kazyna chairman has said the number is over 200).

The reform plan is widely lauded by government officials and state-affiliated media. But experts have doubts. “What we need is a deep and comprehensive structural reform instead of superficial changes like the ones happening at Samruk,” said the executive who spoke on condition of anonymity because of his ties to the fund. He added that the program is relying on a top-down and one-size-fits-all approach that will be a challenge to apply to Samruk-Kazyna’s myriad subsidiaries.

Differences of opinion within management also appear to be threatening reforms. In early July, Kazpochta CEO Askhat Beysenbayev stepped down after he said the reform plan was more “fashionable” than pragmatic.

Frequent state interference into the fund’s affairs may also be an obstacle to reform. In recent years, Samruk-Kazyna has played the role of the government’s piggy bank, funding important government initiatives and Nazarbayev’s pet-projects. In a May 2012 interview published by the Russian-language daily Expert Online, Nurlan Rakhmetov, managing director of Samruk-Kazyna, acknowledged the problem.

“The government asks us … to supply fuel to oil processing facilities at below-market prices. Just because they want to control the prices for petrol products,” Rakhmetov was quoted as saying. “Kazakhtelecom subsidizes costs of local communication services. A private telecommunications company would not do that! […] To summarize, last year we spent 200 billion tenge [about $1.3 billion at the time] implementing the government’s wishes. In effect, it was a redistribution of profits to favor the government.”

The reform plan is also causing worries of extensive layoffs. In 2013, approximately 2,000 employees were laid off, according to Rakhmetov. More layoffs are underway. In 2014 and 2015, KazMunayGaz is expected to reduce its workforce by 25 percent; Kazakhstan Railways by 17 percent.

Tulegen Askarov, an Almaty-based journalist who covers finance and labor relations, said the lay-offs may aggravate still delicate relations between management and workers. Askarov points to the 2011 labor dispute in Zhanaozen, in western Kazakhstan, that ended in a bloody conflict. “The legacy of the Zhanaozen events still weighs heavily [on Kazakh society], and the government would do well to think about repercussions from unpopular decisions,” Askarov told EurasiaNet.org.

Kaznacheev, the political analyst, sees a perennial concern in privatization in a country not celebrated for transparent business practices. Privatization of so many state enterprises is likely to fuel competition among various business groups, while doing little for ordinary Kazakhs, Kaznacheev said: “Privatization will benefit only a small group of well-connected people at the top.”

Nazarbayev appears to be aware of risks. Addressing a government meeting last October, he spoke about the need for open auctions.

“With the help of [privatization], we would like to create a new wave of new businessmen. If we do not watch [the privatization process] closely, the benefits will again go to well-connected ‘our men,’ ‘their men,’ ‘sons-in-law,’ ‘brothers.’ We won’t achieve anything in that case,” the president said in comments carried by Tengrinews. “[Competition] should be open and transparent. The one who wins the competition will own the asset.”