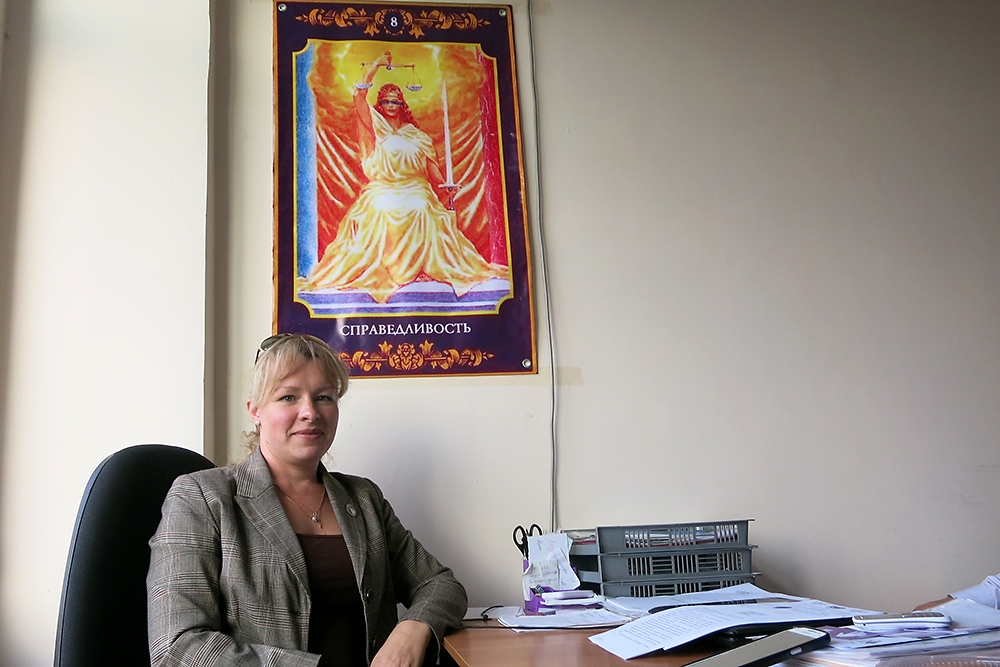 Sitting under a poster of a blindfolded figure of Lady Justice, Olesya Khalabuzar, head of Kazakhstan’s Justice political party, says her party stands for “legal justice, social justice and, naturally, justice in defending human rights.” Justice registered as the most recent Kazakh political party in August, just as the last functioning opposition party was being shut down over technical irregularities. (Photo: Joanna Lillis)

Olesya Khalabuzar goes about her daily business under the formidable, blindfolded figure of Lady Justice.

That symbol is at the core of her political movement, aptly named Justice.

There is a Quixotic flavor to that goal in a country dogged by violations of political and civil liberties, as well as by rampant corruption. Undeterred, Khalabuzar’s fledgling movement — called Adildik in Kazakh, and Spravedlivost in Russian — is throwing down the gauntlet to President Nursultan Nazarbayev, challenging him to reckon with grassroots voices.

Justice is arriving on the scene at a politically auspicious moment, as Astana grapples with an economic crunch that has deflated optimism about a prosperous future fueled by sales of oil and other natural resources.

The timing of the movement’s appearance may prove important. At the moment, all genuine opposition forces have been quashed. Meanwhile, economic growth is slowing, the currency continues to weaken and living standards slide. That may mean a small movement like Justice could punch above its weight.

Justice declared in July its intent to become Kazakhstan’s newest political party, just as the last functioning opposition party was being shut down over technical irregularities.

The demise of the Communist Party was the latest chapter in what Rico Isaacs of Oxford Brookes University, author of a book on Kazakhstan’s political parties, described to EurasiaNet.org as “a story of marginalization and decline” of the opposition.

Some parties have been banned and others co-opted by the government. Still others have disintegrated under the weight of infighting and pressure from the authorities, Isaacs explained.

Other than the ruling Nur Otan party, the political forces represented in parliament are a pair of pliant, pro-governmental parties — the ostensibly business-oriented Ak Zhol and the Communist People’s Party, an ersatz radical alternative to the now-banned communists.

Actual criticism of the government comes mainly from solitary civil society activists. Two of the most vocal such activists are currently in jail on suspicion of fomenting ethnic strife.

Justice is not yet a political party — at least officially. It has 1,000 members, far short of the 40,000 required to seek official status. Experience shows even meeting the numerical requirement may not guarantee registration for political movements that do not have officials’ blessings.

Khalabuzar is something of a political veteran, given her previous work for opposition parties like Alga!, which spent years in legal limbo seeking registration before it was banned in 2012, and the defunct Social Democratic Party of Kazakhstan.

Opposition parties have often had rich behind-the-scenes backers — Alga!, for instance, was closely linked to Nazarbayev foe Mukhtar Ablyazov, who is currently in a French jail battling extradition efforts.

But Justice has no powerful backers and is self-financing, Khalabuzar said. She laughed at accusations by detractors that the movement is getting funding from Washington and Moscow alike.

The other end of the political spectrum has its own suspicions too.

Khalabuzar heatedly denied rumors her party was dreamed up by Astana as part of efforts to spawn artificial and pliant opposition movements. An overture from the pro-government Communist People’s Party to consider a merger has already been rejected, she said.

Khalabuzar said Justice is “setting itself up from the grassroots,” growing out of an activist organization called the Young Professionals Society, founded a decade ago and known for taking on causes ranging from legal injustices to environmental battles and anti-corruption campaigns.

Justice’s slogan reflects these grassroots origins: “By the People and for the People!”

Its description of itself as a “party of reformers and conservatives” is a tongue-in-cheek nod to its motley crew of members, who include youth activists, young professionals, disaffected pensioners and citizens battling the legal system.

Those aspirations for the future are shared by older movement members.

“We’re concerned about the legacy we’re leaving for our descendants,” said pensioner Rufina Galimzyanova. “My main goal is for things to be better for future generations than for us.”

Opposition parties in Kazakhstan have often struggled to articulate clear policies based on popular demands, but Justice thinks it has broken that pattern. The party has unveiled 27 policy proposals in areas ranging from the economy to the legal and justice systems — all of them were shaped from consultations with 2,500 citizens.

The party intends to pursue dialogue, not confrontation, Khalabuzar said as she presented the proposals in Almaty on November 11, challenging Nazarbayev to incorporate them into his policies when he issues his next annual state of the nation address.

Positioning itself as a liberal-democratic party, Justice is calling for measures to temper the effects of the economic crisis on ordinary people and major overhauls of the policing and judicial systems.

Many of the demands are non-confrontational and echo Nazarbayev’s own 100-step reform agenda. Some points, however, like a call for 95 named judges to be dismissed, are bound to ruffle feathers.

The Justice platform is striking for its almost complete absence of demands for political reform, beyond a demand for gender quotas to ensure greater representation for women in power. Khalabuzar said that is a matter of simple pragmatism. With things as they stand, changes to the political system can only come at Nazarbayev’s behest.

If anything the project is even more ambitious. Khalabuzar said Justice wants to alter mindsets and make authorities, “who consider everyone cattle, understand that… they should respect the citizens of Kazakhstan.”

And everybody has their bit to do, Khalabuzar said. People are “beaten down, feeling like nobody and nothing in this country, and feeling absolutely deprived of rights,” she said. “Until we change from slaves into masters … we will not be able to demand our rights.”