Families of the dead blame corruption for undermining the healthcare service, and the government for failing to prepare in earlier stages of the pandemic. 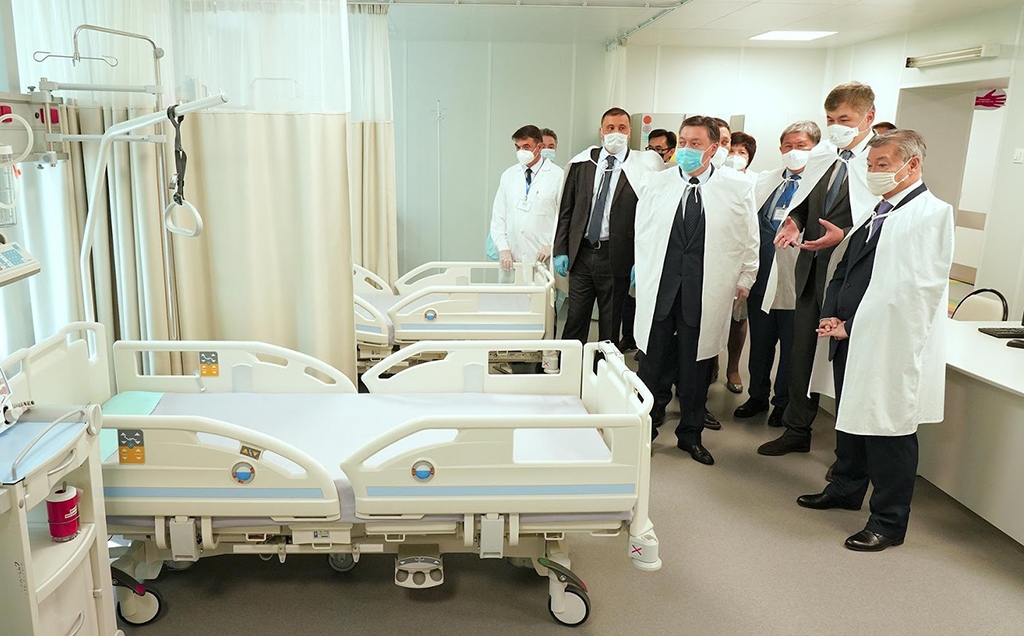 Show and tell: Prime Minister Askar Mamin visiting a hospital in northern Kazakhstan in May (primeminister.kz)

When Zhannur Zhumageldina started gasping for breath in the middle of the night, her mother called for an ambulance.

The ambulance did not come.

In the morning, the hospital in the city of Semey in north-eastern Kazakhstan refused to admit the ailing woman, who was 28 and disabled.

That night, Zhumageldina died at home without receiving medical attention from a healthcare service stretched to breaking point by a surge of COVID-19 cases. As of July 20, there were 71,838 confirmed cases in Kazakhstan.

When she called the emergency services in the early hours of June 29, Mayra Zhumageldina explained that her daughter had developed a sore throat and a hacking cough, and was now suffering from an acute shortage of breath.

Was she running a temperature, the dispatcher asked, naming a common symptom of COVID-19. When her mother responded in the negative, the dispatcher said there was no ambulance available to respond to the call.

The next morning Zhumageldina took her daughter to the hospital, where doctors said they could not admit her and supplied a number to consult a duty medic. That doctor refused to make a home visit but, over the WhatsApp messaging app, advised on medication to alleviate Zhannur’s symptoms.

“They told me then they would send a nurse or doctor to do some injections, but Zhannur died that night,” Zhumageldina told Eurasianet.

This time an ambulance crew responded to a call. But “they came after Zhannur had already died in my arms.”

Doctors identified the cause of death as heart failure, a fatality which will not show up in the official coronavirus mortality statistics.

However, it serves as a tragically telling illustration of the hidden toll that the pandemic is taking on some of the most vulnerable members of society, in the face of the government’s failure to curb the coronavirus surge resulting from a botched easing of lockdown, now re-imposed.

Zhannur Zhumageldina was a second-generation victim of nuclear testing, born with microcephaly – a neurological condition in which the head is abnormally small, impeding brain development – and scoliosis in a village near the Semipalatinsk nuclear testing ground, which was used to test the Soviet Union’s atomic bombs. The testing site closed in 1991, the year before Zhannur’s birth.

Her death has left her mother, who had cared for her full-time at home for the past 28 years, devastated. She will always wonder whether medical attention could have saved her daughter, had overstretched healthcare staff been able to provide it. “Maybe if doctors had done something to her heart, Zhannur wouldn’t have died.”

Grieving families all over the country are harboring such lingering doubts.

On the other side of the country, in the city of Shymkent, 2,000 kilometers south of Semey, Dauren Mombayev, a lawyer, believes that the combined failings of the healthcare service and the government in handling the pandemic led to the demise of his 68-year-old father on July 5.

He cites a litany of failings, from a two-hour wait for an ambulance, to a battle to get Dauletbek Mombayev admitted to hospital, although he had a fever, was gasping for breath and had dangerously low blood oxygen levels, according to a test run by the ambulance crew.

The registrar initially refused to admit him, Mombayev explained. “She said: ‘First there’s no medicine; second there’s no oxygen for us to take him; and then we’ve got no space.’”

Kazakhstan’s doctors are working under intense pressure, and at great risk: over 5,000 medics have contracted the coronavirus, and 51 have died.

After Mombayev raised a ruckus, his father was admitted and diagnosed with pneumonia – a diagnosis the government recently acknowledged is given to patients suffering COVID-like symptoms in whom the coronavirus has not been confirmed by testing. Last week the government said it would start including such cases in the official coronavirus tally from August 1.

Kazakhstan is experiencing a spike in pneumonia cases, which the World Health Organization says is likely down to undiagnosed COVID-19.

Pneumonia diagnoses rocketed by 310 percent last month compared to June 2019, to 32,724. Deaths shot up by 129 percent, to 628, leading President Kassym-Jomart Tokayev to dub the situation “extreme.”

The government has reported 585 fatalities with COVID-19 during the entire pandemic.

Mombayev’s family was unable to discover if the hospital had tested him for the coronavirus, and met a brick wall when seeking information about his treatment.

“We asked: ‘What are you treating him with, what medicines?’ They didn’t tell us anything. And after he ended up in intensive care, the doctors stopped coming out to us at all. No one could tell us what substance they were injecting him with, or what the treatment protocol was,” Mombayev said.

Relatives had to bring to the hospital not only medicine but also oxygen for Dauletbek to breathe, which they purchased from a workshop that normally supplies carbon dioxide to breweries and suchlike.

Oxygen shortages are on the government’s radar, albeit too late for the Mombayevs. Last week, Health Minister Aleksei Tsoi ordered local authorities to ensure hospitals have supplies, and oxygen-production workshops were opened at Shymkent hospitals.

Around $280 million to fight the pandemic has been allocated to the healthcare system, which Tokayev has admitted was ill-prepared.

The government is scrabbling to catch up.

It has upped the number of beds to treat coronavirus sufferers by 70 percent, and plans to quadruple numbers of intensive care beds in infectious diseases facilities in preparation for a “worst-case scenario.”

It is firefighting shortages of doctors by drafting in military medics and medical students, and plugging gaps in worst-hit regions by sending doctors from elsewhere. Last week, officials dispatched 164 medics to energy-rich western regions, which are fighting COVID-19 outbreaks at oilfields, to help contain the outbreak.

But this is no solace to families whose loved ones have died.

Mombayev is bitter, and he plans to demand his father’s case history to see if it bears out his suspicions that he might have survived with better treatment in a better-equipped facility.

He blames corruption for undermining the healthcare service, and the government for failing to prepare it for a possible spike in earlier stages of the pandemic, when Kazakhstan had contained the outbreak.

Political pundit Dosym Satpayev echoed that bleak assessment as Kazakhstan held a day of mourning for coronavirus victims on July 13.

“The bitter truth is that many of them might have been still alive were it not for administrative chaos, cynicism, callousness and corruption in the system, were it not for the collapse of the healthcare system over many years and irresponsibility at all levels, and also the low level of trust towards what is said and done on high,” he wrote on Facebook.

Meanwhile, relatives of the dead are left nursing their grief.

“I don’t need anyone but Zhannur. What should I do? My head is spinning,” said Zhumageldina. “I miss Zhannur so much.”