Kazakhstan gripped by protests as popular frustration spills over

That Kazakhstan periodically sees surges of popular discontent attests to lingering frustrations over inequality in the oil-rich state. 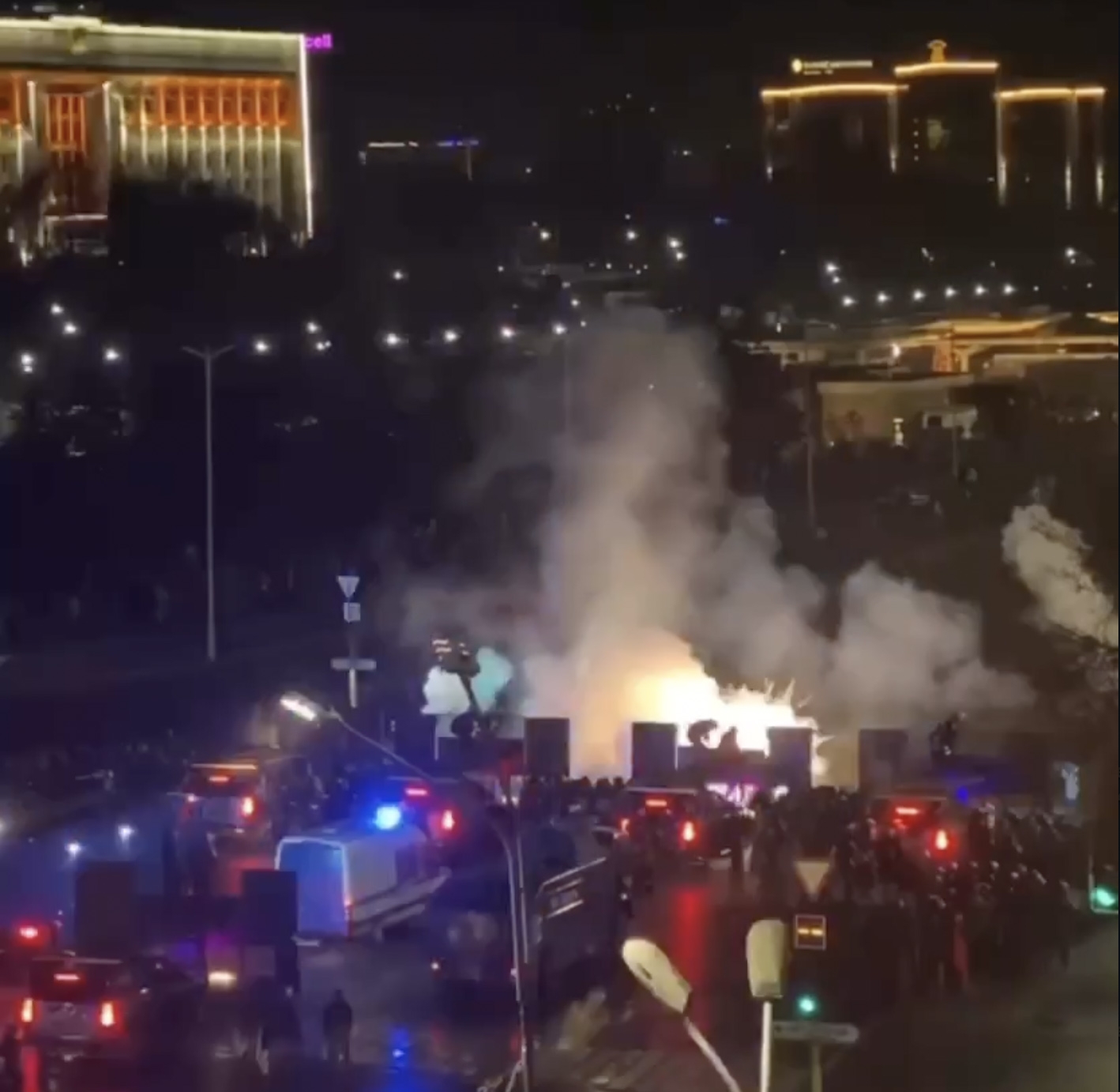 A nationwide wave of protests that began in western Kazakhstan has reached the country’s commercial capital, Almaty, where thousands of demonstrators clashed overnight January 4 with riot police wielding shields, tear gas and stun grenades. After hours of unrest, the president declared a state of emergency in the city and other parts of the country.

Journalists in the city reported hearing the blasts of stun grenades as crowds moved toward Republic Square. Live video streams from the square late in the evening showed the entire area enveloped in thick smoke. Almaty-based news website Zakon.kz reported that several police cars had been set alight and that some demonstrators were smashing the windows of stores and restaurants.

Internet connections in parts of the city have been patchy and users of popular messengers like WhatsApp and Telegram have reported problems getting the apps to work.

Earlier in the evening, President Kassym-Jomart Tokayev delivered a televised address pleading with protestors to refrain from causing unrest.

“Do not succumb to provocations from within and outside the country,” he said. “Exhortations to attack civilian and military facilities are absolutely unlawful. This is a crime that will be punished. The authorities will not fall, and we do not need conflict, but rather mutual trust and dialogue.”

Tokayev’s office said in a statement released several hours later that the state of emergency imposed on Almaty and the Mangystau region, where the first protests took place, would take immediate effect and remain in place until January 19.

The string of rallies that has torn through Kazakhstan since January 2 began in the western oil town of Zhanaozen, ostensibly triggered by anger over a sudden spike in the price of car fuel. Similar impromptu gatherings then quickly spread to nearby villages in the Mangystau region and then in multiple other locations in the west, in cities like Aktau, Atyrau and Aktobe. By January 4, people had come out onto the streets in numbers in locations many hundreds of kilometers away, in the southern towns of Taraz, Shymkent and Kyzyl-Orda, in the north, in the cities of Uralsk and Kostanai, as well as in Almaty and Nur-Sultan, the capital, among other places.

Few saw scenes as fiery as those in Almaty, though. 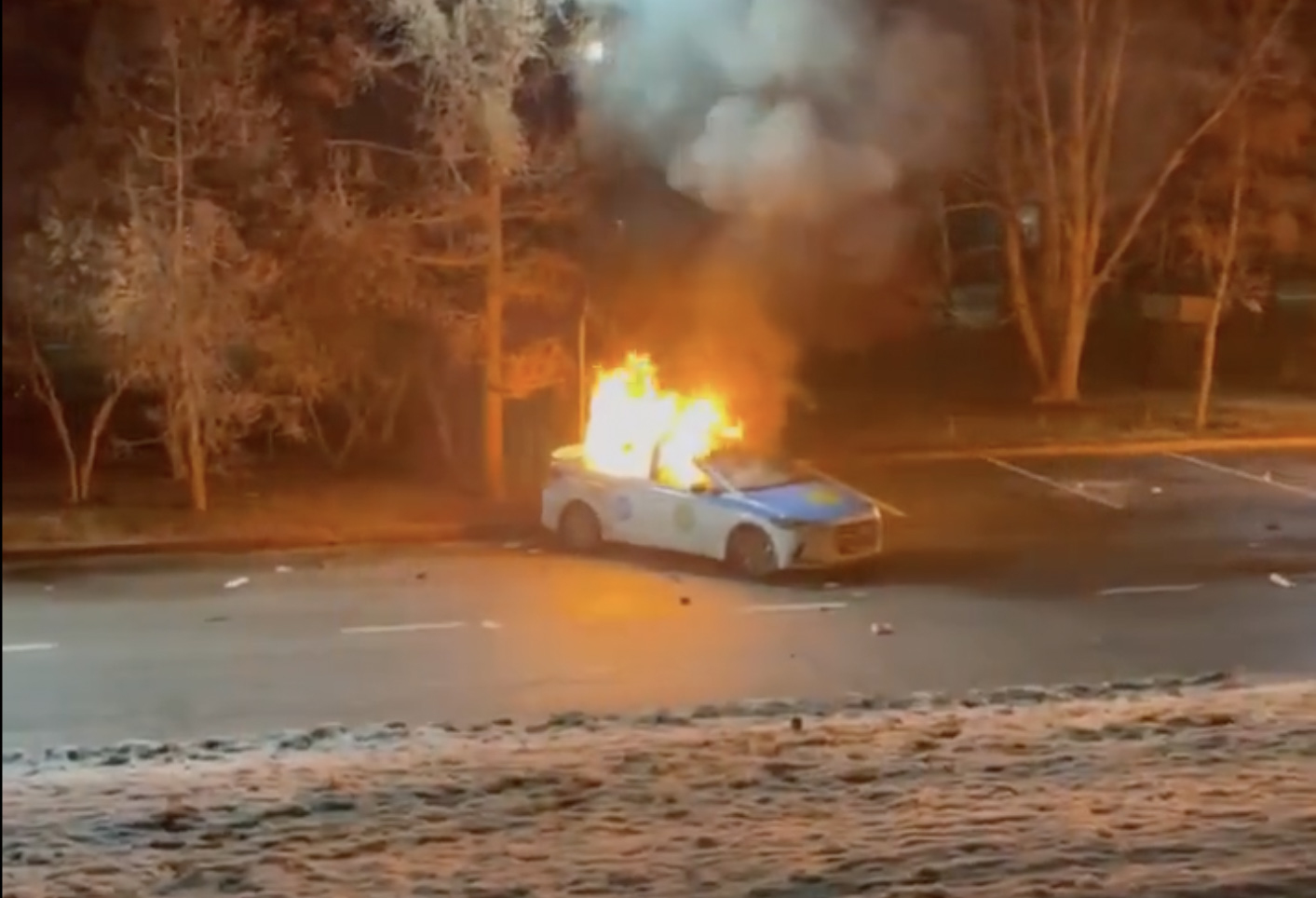 Clashes in Almaty continued throughout the night into January 5. After being dispersed by police from Republic Square, part of the crowd headed around two kilometers downhill, to another historic location in the city, Astana Square, where the seat of government used to be located in Soviet times.

While there is little reliable way to gauge the scale of the demonstrations, a combination of on-the-ground reporting and video footage appears to indicate that these protests may be even larger than those that brought the country to a near-standstill in 2016.

While the grievances that sparked the first rallies in Zhanaozen were to do with fuel prices, the sometimes rowdy demonstrations that have followed appear to be of a more general nature. Chants of “shal ket!” (“old man go!”), usually understood as a reference to former President Nursultan Nazarbayev, who continues to wield significant sway from behind the scenes, have been heard at many of the demos.

That Kazakhstan is periodically gripped by these surges of popular discontent attests to lingering frustrations fueled by perceptions that the country’s immense oil-generated wealth has not been distributed fairly.

The nominal average salary in Kazakhstan is around 250,000 tenge ($575), and even that figure is disbelieved by many. But while earnings have stagnated for those on low incomes, the cost of basic staples and real estate have soared in recent years.

And then there are the dubious practices that have propelled a select community of well-connected people into global rich lists.

The sentiment expressed by Manshuk Ergaliyeva, the director of a household goods store in downtown Almaty, in a recent interview to Eurasianet conveys a popular sense of dismay over corruption in Kazakhstan.

“We could have lived as well as the people of Dubai thanks to oil revenues, if only they hadn’t been plundered,” she told Eurasianet.

Moreover, the political system is fully controlled by the government. Only the ruling party, Nur Otan, which holds most of the seats in parliament, and a handful of loyal puppet parties are officially registered. Political groupings and nongovernment organizations critical of the government are either shut out or harassed into extinction.

The last major protests to seriously rattle the government came after the 2019 presidential elections that secured Tokayev’s position as president. Tokayev was handpicked by Nazarbayev as his successor and is widely viewed as lacking independence from his mentor, who retains much of his power by virtue of his position as chairman of the Security Council, an institution that oversees all the nation’s security bodies.

In the wake of that show of discontent, which has easily been outmatched by what unfolded this week, Tokayev sought to placate detractors by forming a consensus-building forum called the National Council of Public Confidence. That initiative went nowhere, however, and was roundly derided as an exercise in window-dressing.

Already existing hardships have only been compounded by the COVID-19 pandemic. In 2020, the economy contracted by 2.6 percent. That has been a traumatic experience for a country that saw a protracted period of buoyant growth throughout the 2000s and also later, during the recovery following the 2009 global financial crisis.

Almaty resident Amir Shaikezhanov, who runs an online project promoting healthy living, vented his frustrations through social media, the only outlet still left for those unwilling to brave the streets.

“This state is total crap. Most people can barely afford to live in current conditions,” he wrote on Facebook. “Maybe rallies won’t affect prices (and they probably shouldn’t either), but they are important because they show how people feel, how desperate citizens have become.”