Kazakhstan: Hard-up doctors say quick fixes are not the cure

Doctors often pad their income by working hand-in-hand with pharmaceutical companies. They get commissions in exchange for prescribing certain drugs. 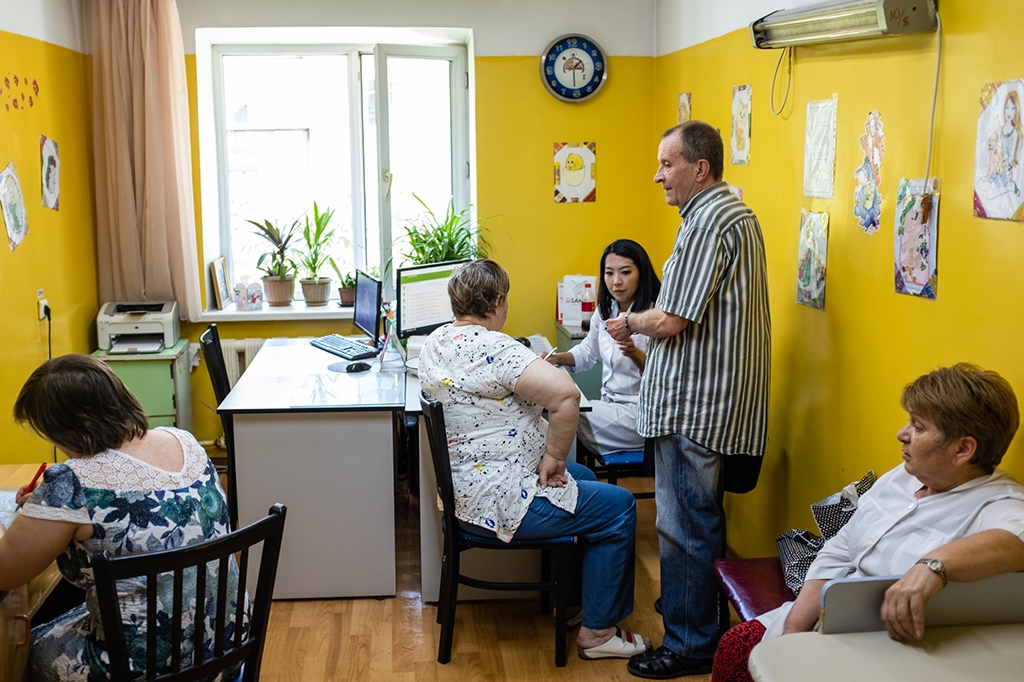 Aigerim Zhakasheva meets patients in her office in Almaty. (all photos by Danil Usmanov)

Instructors at the Kazakh National Medical University in Almaty have always been candid with their freshmen.

“You should think hard about whether you want to embark on this difficult path, because the life of a doctor is not just about victories, happiness and success,” the late rector of the university, Aikan Akanov, told incoming students some years ago.

Doctors have it hard everywhere, but things are particularly bad in Kazakhstan, where critics of the authorities say that the government has serially failed to parlay its vast oil riches into improving frontline medical care for its population.

Getting a medical qualification takes about seven years.

In her darkest moments, KNMU graduate Aigerim Zhakasheva, who comes from the city of Taldykorgan and is a medic at an Almaty polyclinic, wonders if all that hard work wasn’t a waste.

Her monthly take-home pay is $200. By performing some additional duties, she can round that sum up to $300.

“When you learn that workers with a minimal education, like drivers and guards, are making far more, you really feel bad,” Zhakasheva, who is in her early 30s, told Eurasianet.

What keeps her from ditching the work is the satisfaction she gets from bringing some joy back into people’s lives.

According to government figures, the average monthly pay of medical specialists in Kazakhstan is around $320. That is below the average national pay of $420.

This is grist to the mill of anti-system politicians and activists who have argued for years that the government is squandering money or losing it to corruption while regular folk feel the pain.

The low pay reserved for doctors is a holdover from Soviet times, when medicine and teaching were among the worst-compensated professions. This state of affairs remains the case in many Central Asian nations.

Frontline healthcare is largely state-funded. But even then, patients still have to pay for much of the treatment and medicines they receive.

That was confirmed in a 2018 report by the Organization for Economic Cooperation and Development.

“While in OECD countries households pay on average 40 percent of the cost of pharmaceuticals out of pocket, in Kazakhstan, the figure is 84 percent,” the report found.

Zhakasheva said doctors often pad their income by working hand-in-hand with pharmaceutical companies. The medics get commissions in exchange for prescribing certain drugs.

This practice first took hold in the 1990s, as the pharmaceuticals gushed into the untapped healthcare markets of the post-Soviet Union. Critics say that the result has been that doctors often dole out drugs that are both pricey and ineffective.

Zhakasheva insisted that her polyclinic only prescribes readily available and affordable drugs.

Public scandals draw attention to the issue from time to time. Two years ago, there was an outcry when video footage surfaced of the head doctor at an Almaty hospital, Anuar Amanov, instructing staff to ensure that patients were advised to undergo as many paid procedures as possible.

“Pump the patients!” he is heard to say.

When the scandal broke, Amanov was fired. Following a welter of criticism and insults, he left for Europe for further studies.

And then there are the bribes.

In March, the chief doctor at a clinic in Almaty, Nurlan Turdalin, was arrested on suspicion of accepting a $3,500 bribe. Anti-corruption officials said that Turdalin was allowing a businessman to work out of an office in the hospital and that he was taking kickbacks to give companies preferential treatment during government tenders.

This is straight-up, old-fashioned corruption, but the reality is that almost all doctors receive informal payments. It is the norm for patients in the hospital to “thank” medical staff for care – often before the care is actually given.

Nurlan Suleimenov, who is from Almaty, became a father recently. When his wife was admitted to the hospital maternity ward to have her baby, he gave $400 to the staff to ensure that she got the best possible attention.

“If there are patients who are just counting on the free services to which they are entitled, they can expect to be the last that get looked at by the doctor,” Suleimenov said.

Suleimenov said that whereas it used to be enough to reward doctors with a box of chocolates or a bottle of champagne, only money will do the trick these days.

Zhakasheva believes, however, that those who carp about doctors have little understanding of just how tough their job can be.

“Every day, I see about 50-60 people. Each one has problems. In the evening, I get home totally bushed. I don’t even have the energy to speak to anybody,” she said.

Zhakasheva’s dream is to buy a one-bedroom apartment through a government-subsidized mortgage program. But with her income as it is, she doubts she can do this any time soon. For now, she must live with her relatives. Her pay doesn’t even cover her living expenses.

“I got an offer of work from a pharmaceutical company with decent conditions. But I cannot leave the job that I love,” she said, adding that many colleagues have been unable to resist the same kind of proposal.

The authorities know how sensitive the issue is and have made efforts to be seen addressing it. Earlier this year, it was revealed that there would be a 30 percent pay hike for doctors as of July 1.

Following the announcement of presidential elections to be held on June 9, it was decided to bring this pay bump forward, to June 1. President Kassym-Jomart Tokayev, who won the vote with ease because of the way in which the machinery of the state apparatus was thrown behind him, is eager to quash the mounting grumbling about social problems.

But Meruert Makhmutova, the director of the Almaty-based Public Policy Research Center, is scornful about the value of election-period giveaways.

There are happy stories about Kazakh doctors. They tend to involve those who venture into the private sector, however.

Aigerim Telebarisova worked unhappily for little pay as a dermatologist at a private clinic in Almaty. Together with three partners, also doctors, she set up a medical cosmetology center in the city’s Nurly-Tau commercial district.

She is coy about her income, but Telebarisova says she is doing well.

“If you are a doctor, you have to choose between your profession or a high salary. Or you have to hope for something from the government,” Telebarisova said. “Things have been like this for a while. You just have to think differently.”