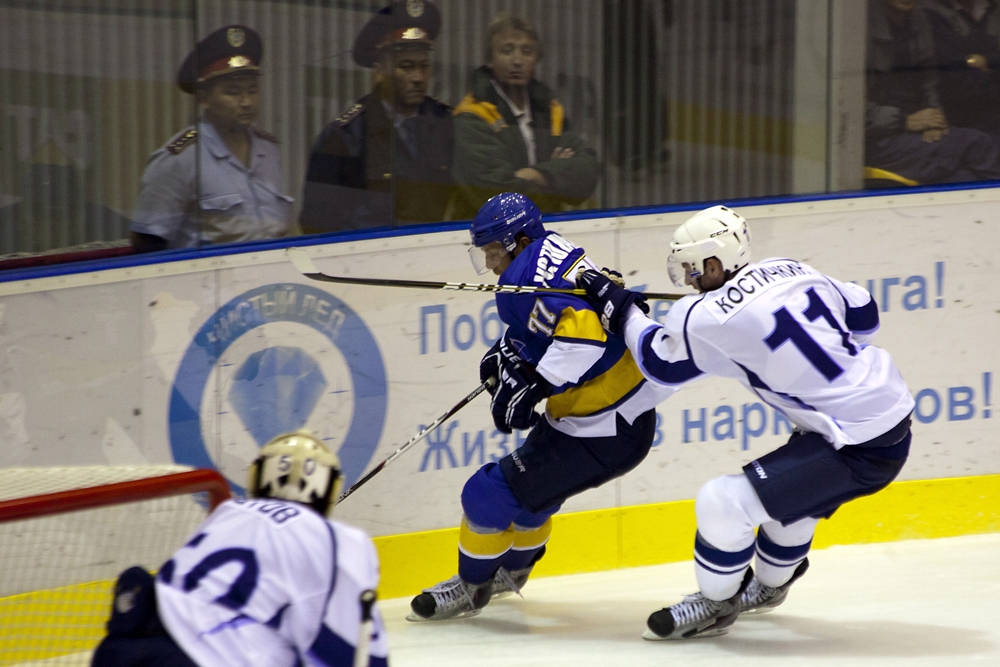 Anyone in Ust-Kamenogorsk, a city with a large ethnic Russian population in northeastern Kazakhstan, will tell you their city isn’t just a mining hub. It’s a hockey town.

The local club, Torpedo Ust-Kamenogorsk, emerged as a hockey force in 1957, when a team of no-name factory workers walked away with a silver medal in an all-Kazakhstan tournament. The club kept winning and quickly through shot the ranks of Soviet hockey, earning promotion to the all-union “A” league during the 1964-65 season.

From the 1960s through the 1980s the Torpedo club was a player development machine, producing such stars as Boris Alexandrov – the youngest player on the USSR’s 1976 gold-winning Olympic hockey team. And as the legends of the 1970s got older, they made sure to pass on their skills to new generations in Ust-Kamenogorsk. After a celebrated 15 years as a goalie for the Torpedo club, for example, Victor Nabokov established a notable goaltending school in the 1980s. It produced five goalies who went on to play in North America’s NHL, including his son, two-time All Star Evgeni Nabokov, who is now with the New York Islanders.

“He [Victor Nabokov] gave much to this city and to the game of hockey,” recalls Torpedo’s head trainer and one of the team’s all-time leading scorers, Sergei Mogilnikov. He credits such hometown heroes with establishing a passion for the game in Ust-Kamenogorsk (which is known as Oskemen in Kazakh).

After the dissolution of the USSR, the team kept up much of its momentum, despite losing many of its players to Russian teams. Between 1991 and 2008, Torpedo (renamed Kazzinc-Torpedo in 2001, in honor of the team’s biggest sponsor, the Kazzinc mining company) led the nascent Kazakhstan Hockey League for 12 of its first 16 seasons.

“I’ll let you judge. Go see a game yourself,” bemoaned the manager of a local sports apparel shop, 100% Hockey. “In the Soviet Union they were the best.” And the fading glory of hockey is not just a phenomenon at the professional level; youth participation has been declining for years.

So what happened to the magic? And where did it come from in the first place?

The first explanation most people attribute to the Torpedo’s waning popularity and sliding record is simple: money. Better facilities and better pay have drawn players to other cities, not just in Russia but also Kazakhstan, as Astana and Karaganda have invested heavily in professional teams.

On the training front, Torpedo has experienced two great losses in the last decade. Knee problems forced Nabokov to close his goaltending school. And two years after leading Kazakhstan’s Olympic team to fifth place in 1998, legend Boris Alexandrov returned to head up training for the Torpedo, but was tragically killed in a car crash a year later.

On the youth level, equipment is expensive and schools only provide modest support; parents have to provide the funds.

“The cheapest item my son is wearing costs $40. And my god that boy grows so much each year, he constantly needs new gear,” says Valentin, a hockey enthusiast and father of a 13-year-old player. “Still, I’m just happy he loves the game. Most kids today would rather play video games all day.”

For those who can afford the equipment, facilities are available. Not only is the Sport Palace – the Torpedoes’ home rink – available for all levels of play, the Kazakhmys mining company recently donated 175 million tenge ($1.16 million) for a new hockey rink, which opened earlier this year. And rumors abound of still another rink in the works.

And stars are still being bred; they’re just leaving when they reach maturity. Alikhan Asetov, the 16-year-old captain of one of the Torpedo’s youth teams, was recently invited to play professionally in Yaroslavl, Russia. Asked if he’d rather stay in Ust-Kamenogorsk if there were an opportunity and money, he shyly said, “I just want to play.”

But the issue isn’t just money. Something more intangible has been lost.

“Hockey used to be a part of the culture here. Everyone was connected to hockey. People married their daughters off to players, people raised their kids to play hockey because they loved the game,” laments Mogilnikov. “It’s different now; they want to go to the NHL and become millionaires.”

Three years ago, 21-year-old hockey buff Mikhail Tamchinov formed a Torpedo fan club. Although he is thrilled to see the team has hired trainers who lived or played in Ust-Kamenogorsk previously, he also asserts that to increase local interest, the club needs “to create a relationship with fans and the community.”

Mogilnikov also sees a solution in youth involvement: “It’s not complicated. Yes, we need money, but more importantly we need people who love children, and love to teach them to skate at a young age.”

One player constituency, however, is growing: girls. About one-quarter of the hockey players in the new Kazakhmys-sponsored rink are girls. On a recent sunny afternoon, 10-year-olds in pink gloves and ponytails were facing off against their male counterparts, and 16-year-olds with earrings under their helmets were body-checking boys twice their size. Thirteen-year-old Nastya shrugs off the idea that hockey is a boys’ sport: “Come watch us play and then say that.”

The glory days of Ust-Kamenogorsk hockey are probably gone forever, but that doesn’t seem to bother the young players who can be found hitting a puck any night of the week in a state-of-the-art rink or sometimes just against a brick wall behind an apartment building. Asked why she loves the sport, 14-year-old Marina offers, “Hockey is life.” Sixteen-year-old star Asetov puts it even more simply: “People like what they like. I like hockey.”