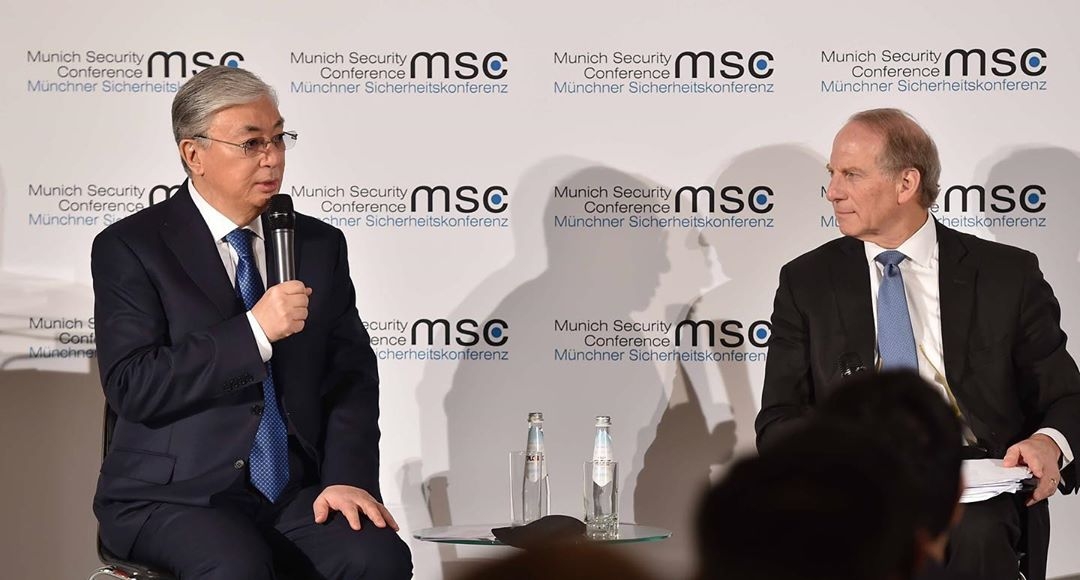 Wait! What's going on with the internet?: President Tokayev at the Munich Security Conference this weekend. (Photo: Presidential administration)

Kazakhstan was over the weekend hit by a collapse of popular internet services that has been widely attributed to government interference.

What is not certain is which arm of the state may have been responsible – a doubt that speaks volumes about internal tensions within the ruling elite.

On February 16, Kazakh internet users were seething about their inability to perform Google searches or access other Google services. Popular messaging service Telegram had by that point been inaccessible for three days.

This all, supposedly, came as a surprise to President Kassym-Jomart Tokayev, who was at the time attending the Munich Security Conference.

His spokesman, Berik Uali, wrote on Facebook mid-morning Munich time to say that Tokayev had just learned “about a crash in the work of the internet in Kazakhstan.”

These denials have not held water.

Last year, mobile operator Beeline responded in written form to a lawyer demanding to know the reason for YouTube, another Google product, being inaccessible. The operator said that the order had come from the Information and Communications Ministry and was a result of the online activities of the Democratic Choice of Kazakhstan, or DVK, a proscribed opposition group.

It is the security services, namely the national security committee, known by its Russian acronym KNB, who are widely understood to enforce blocks.

A 2018 government decree authorized the KNB, Interior and Defense Ministries to block the internet during “emergencies of a social, natural or man-made nature.”

Blocking efforts went into overdrive the following year as Kazakhstan held elections which eased Tokayev into the presidency as the chosen successor of long-time ruler Nursultan Nazarbayev.

Although Nazarbayev is no longer president, he retains important sway over decision-making. His role as permanent chairman of the national security council in particular raises doubt over whether Tokayev is actually the person from whom bodies like the KNB take their cues.

Netblocks, a company that monitors internet censorship, said the block on Google service began at around 6 a.m. local time on February 16.

These have been a troubling couple of weeks for the ruling order in Kazakhstan, and it is the internet that they blame for their headaches.

Earlier this month, Kazakhstan witnessed a deadly bout of ethnic violence as Kazakhs targeted communities of minority Dungans in the southern Jambyl region. At least 11 people were killed, 200 injured and dozens of properties were destroyed.

Exhortations to get involved in the unrest spread rapidly through messaging apps, where rumor and speculation traveled like wildfire.

Another, considerably more trivial case, illustrates why officials in Nur-Sultan are inclined to nervousness over the internet.

Last week, Aisultan Nazarbayev, the British-based president’s grandson and a recovering drug addict, caused a ripple of excitement among Kazakh social media user by taking to Facebook to allege corruption among the ruling family.

While the family itself has said nothing, Information Minister Dauren Abayev went on state television to decry as “external attempts” to pressure Kazakhstan and discredit the former head of state.

“It's time to close this subject. To speculate on the fantasies of an addict only because he is the grandson of the first president is dishonest, unfair and beyond morality,” Abayev said on February 13.

This drama is music to the ears of Nazarbayev’s archenemy-in-exile Mukhtar Ablyazov, who leads DVK.

Since last year’s presidential elections, demonstrations called by the group have fallen flat. Police typically detain would-be demonstrators in the days leading up to a rally and nab the few that turn up on the day for good measure.

Ablyazov will now be hoping that signs of disarray in the ruling family – what he has described as “Hurricane Aisultan” – might stir public interest in a DVK rally scheduled for February 22.

Kazakhstan should brace for a slow internet week.