Kazakhstan: Intimidation rules as authorities seek to control the message

Press freedom campaigners say that Kazakhstan’s reporting environment has “drastically turned to the worse” since the new president came to power. 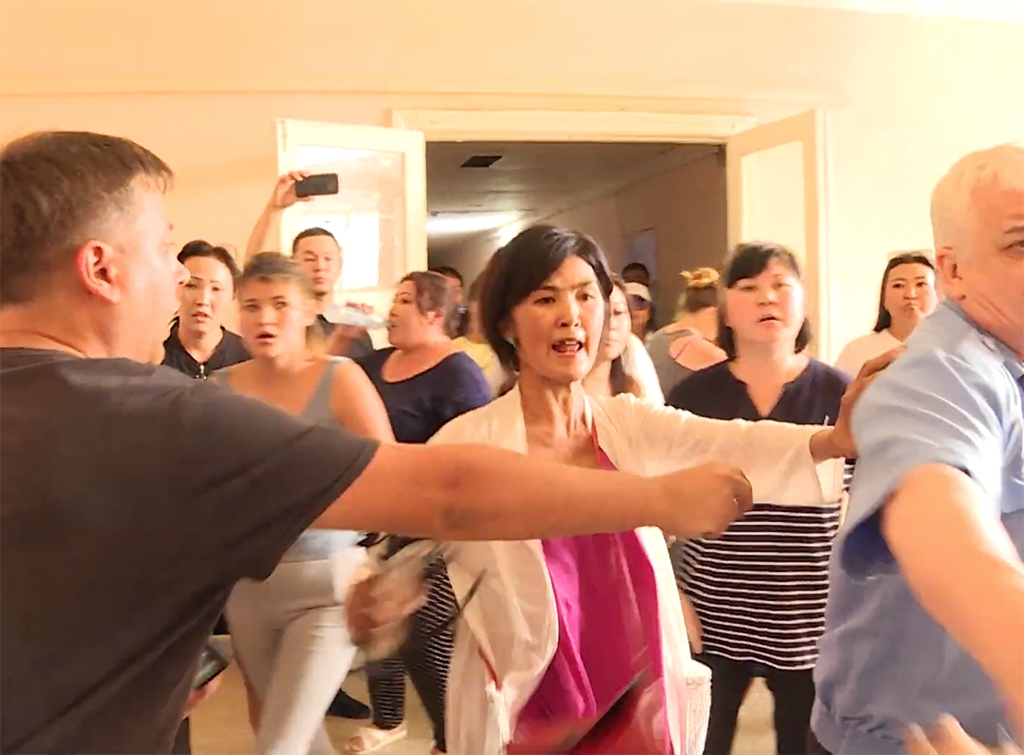 A woman identified by local media as the wife of a government official attacks journalists during a press conference last month. (screenshot from Radio Azattyq video)

The press conference was supposed to be one of the last that Nurgul Tapayeva would cover before heading on maternity leave.

With only two months to go before her baby was due, Tapayeva, a journalist with the Kazakhstan service of U.S.-funded Radio Free Europe/Radio Liberty, was visibly pregnant. That did not deter her assailants.

The attack occurred on July 22 at the offices of the Kazakhstan International Bureau of Human Rights and Rule of Law, which is situated on the fourth-story of a nondescript, out-of-the-way building in Almaty. A gang of women bum-rushed and jostled Tapayeva toward the edge of a flight of stairs as they tried to grab her phone.

“It was such a shock. I was worried for the child,” she told Eurasianet. “After that incident I couldn’t sleep because the child was moving around so much, especially at night.”

Elsewhere in the corridors of the building, all hell had broken loose.

Civil society campaigners worry that this kind of aggression, directed at independent journalists and activists, is become more commonplace. Unusually for Kazakhstan, political uncertainty has been in the air since Nursultan Nazarbayev resigned as president in March. The pressure is on for regime loyalists to ensure that displays of public discontent are kept to an absolute minimum.

The intimidation tactics seem to have been borrowed from fellow former Soviet countries in which agents provocateurs are routinely recruited to cow protesters, dissidents and journalists. Victims of this treatment point to security services as likely ultimate culprits.

This marks something of a departure for Kazakhstan, where wags have dubbed the gang of female provocateurs tateshki. The coinage is based on the Kazakh word tate (“auntie”) and is inspired by Ukraine’s titushki, a term referring to thugs deployed to cause trouble at political gatherings.

Footage produced by RFE/RL’s Kazakh service, which is known as Radio Azattyq, shows the female aggressors screaming, as well as throwing punches and aiming kicks at people. At times, they lunged at cameramen and smartphones. Reporters later said some of their equipment was damaged or stolen.

Meanwhile, videos of the scene circulated by pro-government media took a slightly different tack, showing a man approaching the screaming women with his fists up, before one of them targets him with a karate kick. The apparent intention was to imply the rights activists had brought the trouble upon themselves.

According to publicly available evidence, the police who arrived on the scene allowed all but one of the alleged attackers to leave without questioning. Government ministries and law-enforcement bodies did not respond to Eurasianet’s efforts to seek clarification on this and other points.

Witnesses reported another two curious details. A local beat officer, identified as Ramil Asayev, was reportedly present before the incident began and throughout. And yet, he took no action. Also, unidentified men filming the whole episode appeared to be coordinating with the assailants. Media later identified one of the attackers as the wife of an Almaty city hall official.

Amir Kasenov, chief editor at KazTAG agency, whose journalists had equipment stolen and damaged, suspects that “structures close to the powers-that-be” were behind the incident.

“They wanted to disrupt the press conference,” he told Eurasianet. “The second aim, I think, was to intimidate journalists. To demonstrate that such methods of leverage exist, and that those who stand behind this will not shirk from using them.”

The press conference in question had been organized to share the accounts of a woman currently facing prosecution on charges of extremism that were filed following her involvement in a nonviolent, anti-government demonstration. The attackers claimed they had simply wanted to attend the press conference to voice their objection to such demonstrations.

Tapayeva believes her attackers were emboldened by their sense of impunity.

“I thought at first they would stop if I said I was a journalist and that I worked for Radio Azattyq,” she said. “On the contrary, the screaming and the attack intensified. I realized they didn’t care. They knew what they were doing and that it was illegal.”

Torokul Doorov, director of Radio Azattyq, identifies the period that saw the resignation of Nazarbayev and the ascendancy of his successor, Kassym-Jomart Tokayev, as a watershed for Kazakhstan’s reporting environment.

On March 22, two days after Tokayev was inaugurated as interim president, RFE/RL and other journalists covering protests began experiencing aggression and obstruction. These scenes were witnessed by Eurasianet correspondents in Almaty. RFE/RL reporter Svetlana Glushkova was detained and later fined on assault charges that she deems “an order from above.”

“The situation is very, very worrying,” Doorov said. “For us, the important element was how the authorities … react to such events, and that was shocking. That was disappointing, that in many cases police do not react at all.”

Information Minister Dauren Abayev has promised to ensure allegations that journalists are being prevented from doing their job – a crime under Kazakhstan law – are investigated.

Neither Abayev’s ministry nor the Foreign Ministry responded to requests for comment for this article before publication. The Interior Ministry told Eurasianet that police had initiated a criminal investigation into “vigilantism” but did not address other queries. The prosecutor’s office passed Eurasianet’s request to Nur-Sultan city police, which did not respond before publication.

Interior Minister Yerlan Turgumbayev dismissed the incident at the human rights bureau as “two sides arguing,” but he did promise to investigate.

“If those who attacked the journalists are not identified and punished, their impunity will serve as confirmation of their links to the powers-that-be,” Yevgeniy Zhovtis, the director of the Almaty rights group, later told a press conference.

It is “extremely dangerous” if the state “delegates the right to use violence to others,” Zhovtis said.

Zhovtis is among 38 signatories of an open letter to Tokayev in which petitioners voiced concern over the safety of journalists and campaigners. The environment has “drastically turned to the worse,” argued the signatories of the letter, which cataloged attacks and threats against 11 organizations and 77 people in June alone.

Tokayev, meanwhile, is pledging consensus-building through his recently instituted National Council of Public Confidence. Skeptics deride the initiative as a talking shop.

“If today journalists from Azattyq and KazTAG are attacked, tomorrow it will be you – all of us, all the people of Kazakhstan – who will be attacked. I urge everyone to take the situation very seriously,” Bapi said.