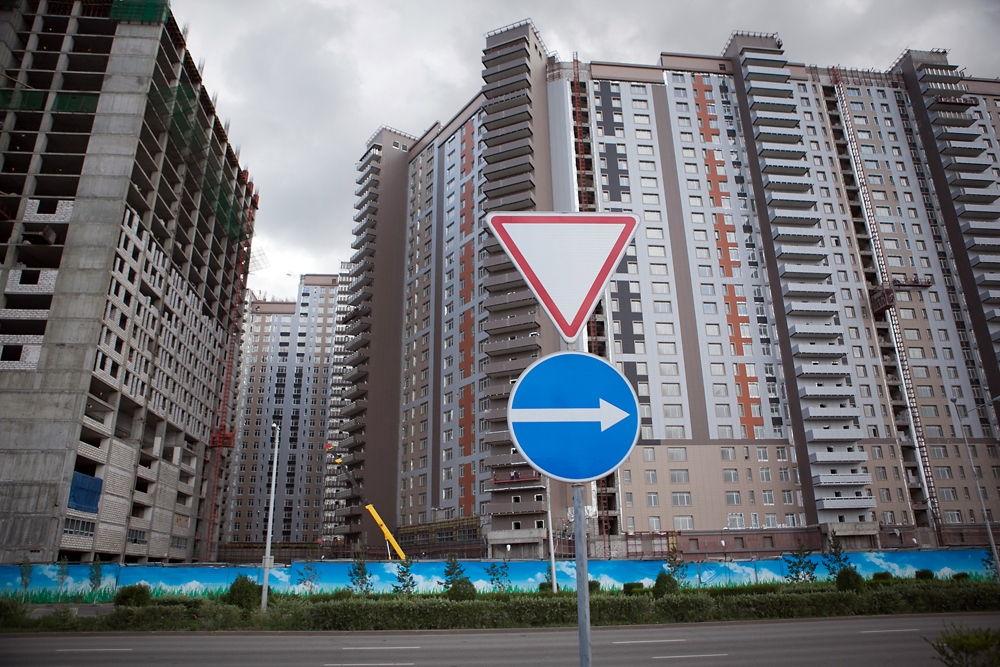 Has Kazakhstan taken a wrong turn by joining the EEU? (Photo: David Trilling)

With the Russian economy starting to creak under the weight of Western economic sanctions imposed over the Ukraine crisis, a question is being posed in Kazakhstan: will the Kremlin’s aggressive geopolitical agenda cause Astana excessive economic pain?

In just over three months, Kazakhstan, along with Russia and Belarus, is expected to launch the Eurasian Economic Union (EEU), an ambitious free trade group that would be an outgrowth of their existing Customs Union. The formal launch date is January 1.

Right up until a few weeks ago, officials in Astana, with President Nursultan Nazarbayev leading the charge, were extolling the virtues of an economic union that would represent a market of 170 million people and have a combined GDP of $2.7 trillion. But now -- with western sanctions biting in Russia, and repercussions reverberating across its borders -- skeptics are starting to ask what Kazakhstan stands to gain from economic integration with Moscow.

“If before there could have been debates whether the EEU was more good or bad for Kazakhstan, now it is clear that it is a major handicap,” Nargis Kassenova, director of the Central Asian Studies Center at Almaty’s KIMEP University, told EurasiaNet.org. “Kazakhstan has tied itself to Russia, which has sacrificed its economy to the pursuit of overly ambitious geopolitical goals.”

Kazakhstan is clearly feeling the political backlash of the Ukraine conflict: even Nazarbayev – traditionally a staunch ally of Russian leader Vladimir Putin’s, and long a strong advocate of economic integration with Russia – seems to be a more cautious bedfellow these days. Nazarbayev’s clearest signal of discomfort yet has been a public suggestion that Kazakhstan might consider withdrawing from the union, if the government felt the country’s sovereignty was being undermined.

Already, Kazakhstan is experiencing a slowdown in exports to Russia, experiencing a decline of 21 percent during the first half of 2014 in comparison with the same period the previous year. Meanwhile, a drastic reduction in the ruble’s worth could put pressure on the Kazakhstani tenge, which has already been devalued this year.

“Kazakhstan's economy was set to slow down this year anyway, as real wage growth was slowing and oil production and exports weakening,” Nice noted. But, he emphasized, events in Russia have “certainly had an effect.”
“The clearest impact is through lower demand for Kazakhstan's exports because of the additional slowdown in Russia's economy as a result of sanctions,” he continued.

Business executives and observers voice concern that sanctions on Russia will start to spook investors away from the wider region. “Western companies will be less willing to invest in Kazakhstan, Western banks will be more cautious in lending money to Kazakh banks,” Kassenova said.

Astana prides itself on enjoying good relations with Western states, as well as with Russia and China, and has no desire to jeopardize its diplomatic status quo for the Kremlin’s sake. Europe is also an important market, accounting for 41 percent of Kazakhstani exports and 54 percent of imports last year. “The tit-for-tat sanctions between Russia and the West are a real problem for Kazakhstan, which has no interest in cutting economic ties with the US or EU,” Nice told EurasiaNet.org.

A desire to maintain a “multi-vector” approach to foreign policy appears to play a role in Astana’s decision not to join Russia’s food bans against Western states. But there are also signs that Kazakhstani officials are miffed by what they see as Russian high-handedness.

“It doesn't seem like the Kazakh government was consulted by the Kremlin before it banned food imports,” Nice added, “even though it could disrupt Kazakhstan's supply chains, and the EEU members are meant to coordinate trade policy.”

The food ban issue has reinforced an impression among many in Kazakhstan that Russia strives to dominate the EEU – economically, as well as politically. Statistics show that while Astana has reaped some benefits from Customs Union membership, Moscow has reaped far more.

While many business executives in Kazakhstan have welcomed the opening up of Russian markets, others – including agriculturalists and automobile manufacturers – complain about Russian protectionism, despite the union’s theoretical level playing field.

The union also has jumbled Kazakhstan’s efforts to diversify its economy, according to Nice. “What Kazakhstan really needs to do is increase its trade outside the resource sector with the rest of the world, and the Customs Union has complicated this,” Nice said. Customs Union regulations have pushed up Kazakhstani trade tariffs from an average of 6.7 percent to 11.1 percent, a World Bank study found. As a result, Kazakhstani exports are more expensive outside the union. Joining the customs union additionally stalled Astana’s bid to join the World Trade Organization (WTO) by several years; the government now hopes to join this year.

“The overall impact of the Customs Union on Kazakhstan has been negative and promises to be even more so in the light of the worsening of the economic situation in Russia,” Kassenova predicted.